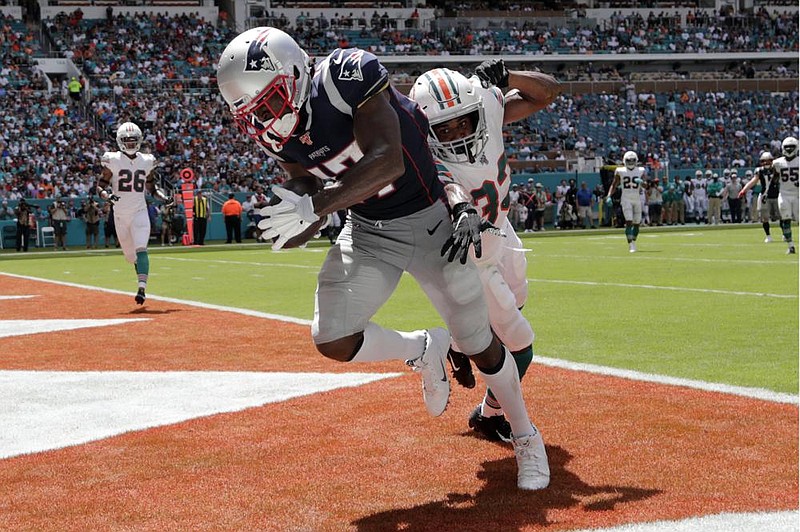 The NFL suspended wide receiver Antonio Brown for the first eight regular-season games of the 2020 season. Brown, who does not have a contract with any team, was suspended Friday under the league’s personal conduct policy. Brown, who played one game last season for the Patriots before being released, can be signed by any team and would be eligible to participate in all of his club’s preseason activities. The suspension would take effect when teams make their final cuts on Sept. 5. As part of the discipline, Brown was directed to continue his program of counseling and treatment. He also was advised that any future violation of the personal conduct policy will “likely result in more significant discipline.” Brown pleaded no contest on June 12 to charges related to a fight with a moving truck driver outside his South Florida home earlier this year. As part of the deal with Bro-ward County prosecutors, Brown pleaded no contest to burglary with battery, burglary of an unoccupied conveyance and criminal mischief. The wide receiver must serve two years of probation, undergo a psychological evaluation and follow-up treatment, attend an anger management course, perform 100 hours of community service and follow a stay-away order from the truck driver and the moving company owner.

Jayron Kearse of the Detroit Lions has been suspended by the NFL for the first three games of the 2020 regular season for violating league policy on substance abuse. Kearse is eligible to participate in all preseason practices. He will be allowed to return to the Lions’ active roster on Monday, Sept. 28, following the team’s Week 3 game at Arizona. Formerly with division rival Minnesota, Kearse signed a one-year, $2 million deal with Detroit as a free agent. He spent four seasons with the Vikings after being selected in the seventh round of the 2016 draft, and was mostly a backup safety who played regularly on special teams.

Buffalo Bills starting right guard Jon Feliciano is out indefinitely after having surgery to repair a torn pectoral muscle. The team did not reveal when or how Feliciano was hurt in making the announcement on its website Friday. Feliciano is a fifth-year NFL player entering his second season in Buffalo. He started 16 games last year and was part of an offensive line that returned all five starters entering training camp. Buffalo has depth along its line, with one option having Cody Ford make the switch to guard after spending his rookie season last year starting at right tackle.

Tommy Armour III had been playing enough golf during the pandemic to know his game was in good shape. All he needed was a spot in the Ally Challenge to show it Friday. Armour and Billy Andrade each opened with a 6-under 66 at Warwick Hills to share the lead by one shot over Bernhard Langer as the PGA Tour Champions returned for the first time since March. Armour wasn’t in the field until he arrived at the course Monday and learned Brandt Jobe had withdrawn. “I played a lot of golf in this period where we haven’t been playing, and I was looking forward to playing well,” Armour said. “There’s two more rounds left. But I had a good feeling coming back when I was first hoping to get in the tournament. I mean, a lot of 50-year-olds and plus, and out of 81 players, somebody’s going to break down a little bit.” Andrade played bogey-free for his 66 at the course that for years hosted the Buick Open on the PGA Tour.

Danielle Kang went more than six months without competing and looked as though she had never been away, playing bogey-free at Inverness Club for a 6-under 66 and a one-shot lead in the LPGA Drive On Championship in Toledo, Ohio. The LPGA Tour’s much-awaited return from the covid-19 pandemic brought an immediate sense of its new world. Kang had no idea where she stood after a closing birde. “There aren’t any leaderboards on the golf course,” Kang said. Inverness is hosting the Solheim Cup next year and offered to stage the first event back for the LPGA Tour since the Women’s Australian Open on Feb. 16. Jodi Ewart Shadoff of England also played bogey-free for a 67. Celine Boutier of France and Lee-Anne Pace of South Africa also were at 5 under until both made bogey on the closing hole. They settled for a 68.

Overnight leader Sebastian Garcia Rodriguez of Spain held off a spirited challenge from England’s Sam Horsfield to retain a share of the lead at the Hero Open on Friday at the halfway mark of the European Tour’s latest stop in Birmingham, England. After setting a course record 10-under 62 in the opening round at the Forest of Arden Marriott Hotel and Country Club, Garcia Rodriguez cooled somewhat in the second with a 3-under 69 that included birdies on the last two holes. Horsfield, meanwhile, completed a sparkling 9-under 63 that included an eagle and seven birdies for a share of the lead at 13 under.

Kyle Stanley had another eagle in a 14-point round Friday to take the lead into the weekend in the Barracuda Championship, the PGA Tour’s lone modified Stable-ford scoring event. Stanley had a 22-point total for a two-stroke lead over Matthias Schwab, Robert Streb and Branden Grace in high altitude at Tahoe Mountain Club’s Old Greenwood Course in Truckee, Calif. Players receive 8 points for albatross, 5 for eagle, 2 for birdie, zero for par, minus-1 for bogey and minus-3 for double bogey or worse. “Actually, I’m not sure what I shot,” said Stanley, who had a 5-under 66. “It’s kind of the weird, the format out here. You’re kind of focusing more on points than you are what your score is. But I had another eagle today, which was nice. I had one yesterday. That really helped my point total.” Stanley eagled the par-5 12th a day after accomplishing the feat on the par-5 sixth. He also had six birdies and two bogeys in his afternoon round Friday. The 32-year-old is trying to win for the third time on the tour after breaking through in the 2012 Phoenix Open and taking the 2017 Quicken Loans National. Stanley needs a victory to get into the PGA Championship next week. The top two from the top 10, not already eligible, will get spots in the U.S. Open in September at Winged Foot. Maverick Mc-Nealy and Troy Merritt had 19 points.