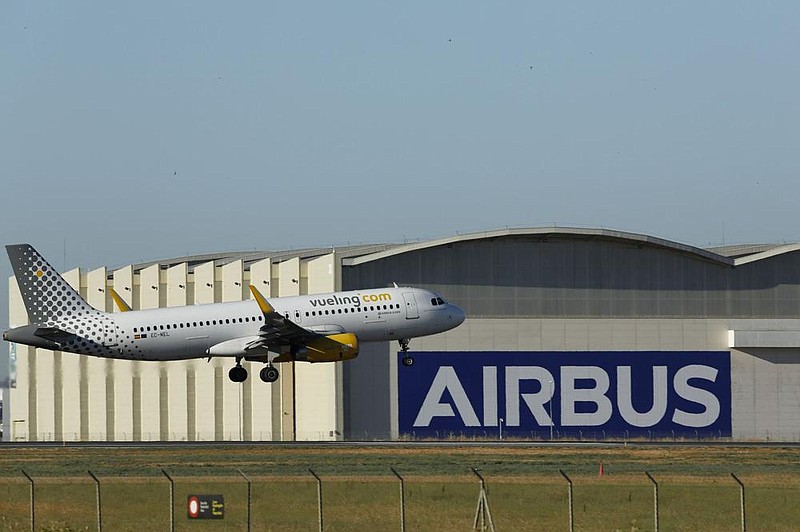 An Airbus A320 passenger aircraft operated by Vueling Airlines lands on the runway at the Airbus San Pablo plant in Seville, Spain, in early July. (Bloomberg News/Marcelo del Pozo)

Airbus cut back wide-body jet production after it burned through $5.2 billion in the second quarter, retrenching further to safeguard cash while it waits out a collapse in demand.

The world's biggest plane-maker will now aim to produce five A350 aircraft a month rather than the six targeted in April, it said in a statement late last week. The company booked a little over $1 billion of coronavirus-related charges against earnings and said a future restructuring provision could total $1.9 billion.

Airbus delivered 74 planes in the quarter, when global fleets were largely grounded, less than one-third of the year-ago tally. With travel set to remain below 2019's levels for several years, the company nonetheless said it aimed to stanch cash outflows in the second half of the year.

"We believe it's going to be a long and slow recovery," CEO Guillaume Faury said on a conference call. "We're trying to take a balanced view on this and not be too pessimistic."

Air travel is reeling from its biggest ever slump after the pandemic brought decades of growth to a shuddering halt. That's left Faury walking a tightrope as he seeks to cram down costs without doing permanent damage to the system of suppliers and skilled workers on which Airbus will rely when better times return. Prospects for a quick rebound are meanwhile receding as new flare-ups of the virus lead to the reimposition of curbs on flights.

It's tough right now to know what the market will look like by the end of this year and even by the middle of 2021, Faury said. Single-aisle plane production could ramp up again in 2022, though air traffic is unlikely to recover fully until some time between 2023 and 2025, he said.

Jefferies International analyst Sandy Morris said Airbus is making a reasonable effort to balance support for its customers, supply chain and employees with generating an acceptable performance for shareholders. One positive sign was a smaller-than-expected buildup in inventory, he said in a note to clients.

Faury said discussions with customers are "difficult" as the manufacturer pushes airlines to take planes. In some cases, Airbus is demanding cash compensation from carriers that aren't able to accept deliveries.

Cash burn for the quarter matched the level for the first three months, excluding a one-off payment to settle bribery claims, as the virus prevented delivery of 145 aircraft. Faury said the ambition now is to be cash-neutral in the second half, before customer financing and any spending on acquisitions.

Revenue plunged almost 40%, with the decline exacerbated by a three-week shutdown of assembly lines as the company took steps to guard against the virus and assessed the situation.

The update comes after rival Boeing announced a raft of new measures last week to preserve cash and adapt to the shrunken market. The U.S. company delayed the debut of its new 777X model, cut build rates for existing planes, said it will end production of the 747 jumbo, and mooted the shutdown of one of two plants that build the 787 Dreamliner. Job cuts might be stepped up.

Airbus' ratcheting down of wide-body rates reflects scarce demand for aircraft used in long-haul services. The European plane-maker left its other production unchanged, after slashing output to 40 planes a month for its popular A320 family in April. At the time, A350 rates were trimmed by about 40% to six per month, while the slower-selling A330 was cut back to two a month.

A Canadian assembly line that builds the A220, a smaller model acquired from Bombardier, will progressively return to its pre-virus rate of four planes per month, Airbus said.

The company is embarking on the biggest restructuring in its history with plans to cut 15,000 jobs in the commercial aerospace division. Faury has meanwhile extended credit lines and clamped down on expenses to give access to 30 billion euros to manage the pandemic.

Airbus said the U.K. Serious Fraud Office has requisitioned its GPT Special Project Management arm, which operated in Saudi Arabia and was closed in April, to appear in court over a corruption-related charge.