Democrat sat near infected colleague by Compiled by Democrat-Gazette Staff From Wire Reports | August 2, 2020 at 4:26 a.m. 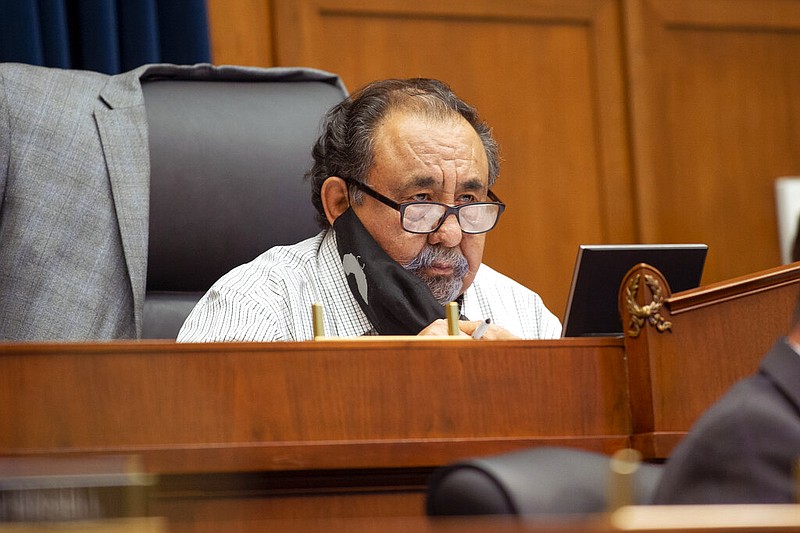 WASHINGTON -- The chairman of the House Natural Resources Committee said Saturday that he has tested positive for the coronavirus.

Rep. Raul Grijalva, D-Ariz., said in a statement that he has the virus but, like U.S. Rep. Louie Gohmert, R-Texas, who also tested positive last week, has no symptoms. He is at least the 11th member of Congress known to have tested positive for the coronavirus.

It's unclear where Grijalva, 72, caught the virus and whether it was from Gohmert. Grijalva went into isolation after Gohmert tested positive on Wednesday because the two had sat near each other at a Natural Resources Committee hearing the day before.

"While I cannot blame anyone directly for this, this week has shown that there are some members of Congress who fail to take this crisis seriously," Grijalva said in the statement. "Numerous Republican members routinely strut around the Capitol without a mask to selfishly make a political statement at the expense of their colleagues, staff, and their families."

Grijalva said he was informed by the Capitol's attending physician that he had tested positive and would self-isolate. He said he feels "fine" and hopes for a speedy recovery.

Gohmert's diagnosis prompted concerns across the Capitol, where there is no required testing and there were few requirements for masks. That day, House Speaker Nancy Pelosi and Capitol officials set broad new mask mandates for the House side, including on the House floor and in hallways and member offices.

In the Senate, where almost all members have worn masks and office space is more spread out, Senate Majority Leader Mitch McConnell has said he doesn't see the need for new mandates in the Senate.

On testing, Pelosi and McConnell have remained firm that there should be no special access for lawmakers as long as the general public doesn't have widespread workplace testing. They have both said that equipment and tests should instead be directed to front-line workers.

The leaders in May rejected an offer from President Donald Trump to send rapid tests to the Capitol for lawmakers. The White House tests anyone who will be in close proximity to the president, which is how Gohmert found out he had the virus. He was scheduled to travel with Trump to Gohmert's home state of Texas that day.

Gohmert also attended a hearing with Attorney General William Barr on Tuesday, and was captured on video walking behind Barr without a mask on as the attorney general entered the hearing room. A Justice Department spokeswoman said Barr was tested Wednesday and the test was negative.

[Video not showing up above? Click here to watch » https://www.youtube.com/watch?v=c2f5cRxrEGU]

Mexico now has the third most covid-19 deaths in the world, behind Brazil and the United States, where a hurricane bearing down on the East Coast on Saturday is threatening to complicate efforts to contain the virus.

Mexican health officials on Friday reported 688 new deaths, pushing the country's confirmed total to over 46,600. That put Mexico just ahead of the United Kingdom, which has more than 46,200, according to the tally by Johns Hopkins University.

Some countries are seeing hopeful signs. China reported a more than 50% drop in newly confirmed cases in a possible indication that its latest outbreak in the northwestern region of Xinjiang may have run its course.

However, in Hong Kong and elsewhere, infections continue to surge. Hong Kong reported more than 100 new cases as of Saturday among the population of 7.5 million. Officials have reimposed dining restrictions and mask requirements.

And Vietnam, a former success story, is struggling to control an outbreak spreading in its most famous beach resort. A third person died there of coronavirus complications, officials said Saturday, a day after it recorded its first-ever death as it wrestles with a renewed outbreak after 99 days with no local cases.

All three died in a hospital in Da Nang, a hot spot with more than 100 cases in the past week. Thousands of visitors had been in the city for summer vacation and are now being tested in Hanoi and elsewhere.

Twelve additional cases were confirmed on Saturday, all linked to Da Nang Hospital. Officials tightened security and set up more checkpoints to prevent people from leaving or entering the city, which has been in lockdown since Tuesday.

In South Korea, prosecutors arrested the elderly leader of a secretive religious sect linked to more than 5,200 of the country's approximately 14,300 confirmed cases. He has denied charges of hiding members and underreporting gatherings to avoid broader quarantines.

The global pandemic has affected nearly every aspect of this year's Muslim pilgrimage to Mecca, with as few as 1,000 pilgrims already residing in Saudi Arabia taking part, down from 2.5 million last year.

The Saudi Health Ministry said there have been no cases of the virus among this year's pilgrims. All were tested, their movements monitored with electronic wristbands and required to be quarantined before and after.

Meanwhile, India recorded its steepest spike of 57,118 new cases in the past 24 hours, taking its coronavirus caseload close to 1.7 million, with July alone accounting for nearly 1.1 million infections.

In France, travelers entering from 16 countries where the virus is circulating widely now must undergo virus tests upon arrival at airports and ports. The country is not permitting general travel to and from the countries, which include the United States and Brazil.

The testing requirement therefore applies only to people entering under limited circumstances, including French citizens who live in these countries. Those who test positive as of Saturday must quarantine for 14 days.

As autumn approaches, nations around the world are grappling with how to safely reopen schools.

A scientist advising the British government on the coronavirus pandemic says pubs in England may have to be closed to allow schools to reopen in September. Graham Medley, a member of the government's Scientific Advisory Group for Emergencies, told the BBC that there may have to be a "trade-off."

On Friday, the head of the World Health Organization predicted the effects of the pandemic will be felt for "decades to come."

"Most of the world's people remain susceptible to this virus, even in areas that have experienced severe outbreaks," Tedros Adhanom Ghebreyesus said in London. "Although vaccine development is happening at record speed, we must learn to live with this virus."

Hurricane Isaias' imminent arrival forced the closure of some outdoor testing sites even though Florida has become a coronavirus hot spot, and other states in the path of the storm prepared emergency shelters that comply with social-distancing measures.

Florida Gov. Ron DeSantis said no immediate evacuation orders have been given and that hospitals in general are not being evacuated of coronavirus or other patients.

The storm edged closer to Florida on Saturday, adding to woes for a state grappling with record cases of the virus, and potentially causing $3 billion in economic losses as it lashes the eastern seaboard.

Florida's daily covid-19 death toll rose to a record last week. Officials in Florida's coastal counties are distributing sandbags and telling residents to shelter in place. Coronavirus testing along the east coast has been halted until Wednesday.

Even as a Category 1 hurricane or a tropical storm, Isaias could cause financial hardship to the East Coast, which could be made worse by the pandemic.

The storm will cause some disruptions at four of the largest ports in the U.S., taxing supply chains, said Lou Gritzo, a vice president and manager of research at insurer FM Global. It also raises issues for people working from home if they face extended power blackouts.

Information for this article was contributed by Mary Clare Jalonick, John Leicester, Rod McGuirk and Arno Pedram of The Associated Press; and by Brian K. Sullivan of Bloomberg News. 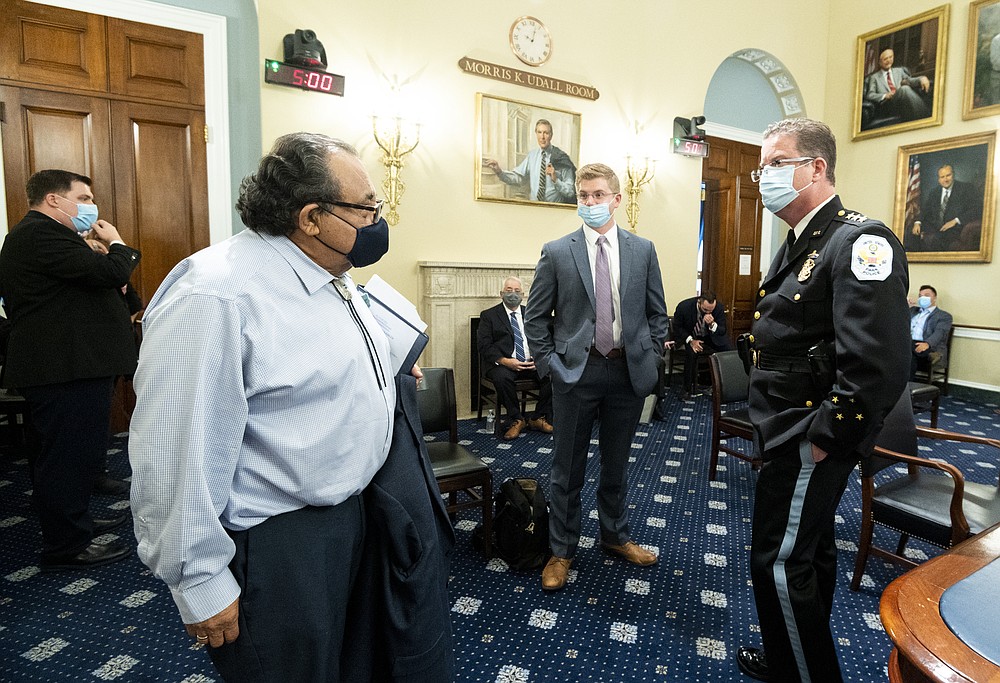