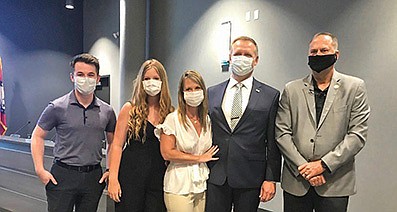 William Tapley got started in law enforcement more than 24 years ago, when he was invited for a ride-along with a friend of his who worked for the Conway Police Department.

Travis Thron, whom Tapley rode with, now works for the Arkansas Game and Fish Commission as a wildlife officer for Faulkner County. Thron said he joined the Police Department in 1994, and for about two years, he and Tapley did several ride-alongs together, mostly just traffic stops and things of that nature.

“I think I was drawn in due to the variety this occupation gives you because it is something different every day,” Tapley said. “That is something that attracted me the most.”

Tapley was recently named the new chief of police for the Conway Police Department. He replaces Jody Spradlin, who retired June 30.

“I don’t think they could have picked a better chief,” Thron said. “William is very intelligent and a people person, which makes for a really good police officer.”

“We are fortunate to have William Tapley as our new police chief,” Conway Mayor Bart Castleberry said. “He came highly recommended from our past chiefs, A.J. Gary and Jody Spradlin.

“[Tapley] brings [to the position] over 20 years of service with the Conway Police Department and is a graduate of the FBI Academy. He understands the need for continued community policing and the priorities of an increasingly professionalized department. I’m confident he will continue to build on the success of the past.”

According to a June 13 article in the Arkansas Democrat-Gazette, Spradlin informed the mayor about his retirement at the beginning of the year, so it wasn’t a surprise. The article states, “Castleberry did not take paper or electronic applications, but he did interview two other candidates, one from within the department and one from outside.”

Since 2018, Tapley has served as chief deputy at the University of Central Arkansas in Conway. He began his law enforcement career at the Conway Police Department in 1996.

“When this opportunity came open, I was excited to come back to the agency I started my career with,” Tapley said. “I always felt like law enforcement has been a calling for me. [Working at UCA] gave me an opportunity to look at a different law enforcement agency and how they handle things, and it was a way for me to grow in my law enforcement experience.”

He said everything about working for UCA and the city is different, including the volume of calls and the people he interacted with on a daily basis. He said the opportunity at UCA gave him a different perspective on “how things are handled.”

Tapley grew up in Guy, which is about 20 miles north of Conway. He graduated from Guy-Perkins High School in 1989 before attending the UCA for a short period of time. He is the first in his family to work in law enforcement.

“I enjoy meeting the variety of people I get to meet and interact with on a daily basis and the ability to make a difference in their lives,” he said. “I’ve only been [at the department] for about a week, so I am still settling in, but I am becoming more familiar with the process.

“I was here for 22 years, but things have changed, of course. So I am evaluating everything and then deciding the direction we want to go.”

Tapley said training of officers has always been a very important thing to him, and he would like to oversee the training of the department’s officers, and “I want us to continue to grow and find new things to make the department better.”

“With the current state of things [and the civil unrest], I want to work with the community and become more involved and have more officers involved,” Tapley said. “It is a very high priority.

“I think it is all about building relationships, and a lot of times, it’s based on misunderstandings and not being familiar with each other. We look to work with the community and help them understand the things we do, while also getting a better understanding of [citizens’] perspectives as well.”

He said law enforcement is a constantly changing field, and it is a challenge to keep up with the best practices.

“But our focus is going to be the things that are important to our community members,” he said.

During his previous time at the Conway Police Department, Tapley worked in almost every division of the department, including patrol, narcotics and the criminal investigation division. He finished his career as a major in administration. He said he has a very good understanding of how every department runs as a whole, which gives him a very unique perspective for the department. Currently, the Conway Police Department has 127 sworn officers.

“He is very familiar with the department,” Thron said of Tapley. “I worked with him in narcotics, and he has been in different departments, so I think he is going to be a good leader for them.”

In 2014, Tapley graduated from the FBI National Academy, where he said he learned from individuals from all over the nation and world, which he found “very enlightening.”

“It gave me the opportunity to see things from a different perspective,” Tapley said. “I believe the things I have accomplished throughout my career are due to the people that surround me and were in the same position I am now.

“We have a great command staff here who are very experienced and very knowledgeable. We have a great group of officers who are caring and community-oriented, and those are the keys to success in this division.”