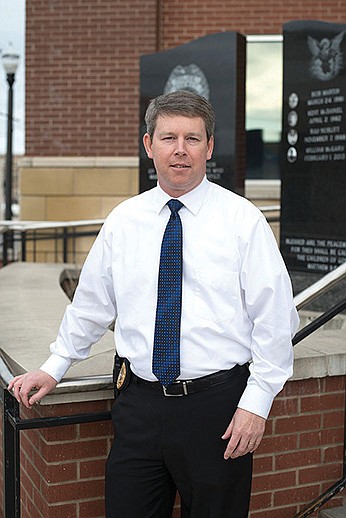 Jody Spradlin was with the Conway Police Department for 29 years, including four years as its chief of police, before retiring at the end of June.

When Jody Spradlin first became a police officer, he never dreamed he would eventually become the department’s chief of police.

“If I had been a betting man, I would have lost some good money if someone had told me I would be chief,” he said. “I didn’t have a desire for it — I never thought that would be the case.”

Spradlin was with the Conway Police Department for 29 years — four years as its chief of police — before retiring at the end of June.

“Going into law enforcement was a calling, and sometimes you just know when it is time to get out,” Spradlin said. “My wife and I had those discussions, and I just finally decided to do it.

“The stress of law enforcement is very high. I didn’t want to be one of those statistics, but usually they say the life expectancy after retirement is five years. I’ve had a good career, and I just thought I would step out.”

“I told him, ‘You can make me do anything, but you can’t make me be the police chief,’” Spradlin said. “When he retired and I became the chief, I told him, ‘I did it on my own.’

William Tapley, who was the chief deputy at the University of Central Arkansas Police Department, was named Conway’s new chief of police. Spradlin said he and Tapley actually worked together at the city department.

“I got to know him well, and he is one of those guys with a very calm demeanor,” Spradlin said. “He was a right hand for me when I was chief, and he was hard to replace when he left for UCA.

“I believe whenever they announced him as the new chief, I wanted to be the first to say, Conway would be a better place to work because of his hiring.

“I fully believe that. I have a lot of faith in him.”

Spradlin said he is not sure what’s next for him.

“I will continue to work, but I don’t know what that is yet,” he said. “I talked to some people who had retired and left the department and went straight into another job, and they said I should take the time to decompress from the job and spend time for myself.

“The things you see in law enforcement are the worst of everyone’s day, every day. I want to take some time, relax and find the good in humanity again, because it is still there.

“Everyone is not like all the issues that law enforcement has to deal with.”

In his resignation letter to Mayor Bart Castleberry, Spradlin said he felt like God called him into this job, and when he retired, there was nothing pushing or pulling him away.

“I just have faith in God, that he is going to lead me where he wants me to go, and what is supposed to happen will happen — the door is wide open.”

Spradlin did say he plans on spending more time with his family. He and his wife, Neva, will celebrate 29 years of marriage in August, and they have three kids: Nathan, 23, Kayla, 19, and Adam, 18. Spradlin said he and his boys are avid outdoorsmen who love to hunt.

“My wife really likes to travel, and we have some bucket-list locations,” he said. “We went on a cruise to Alaska, so we will probably do that again, and Hawaii has always been a place where we want to go.”

Spradlin said he just returned from South Dakota, where he spent a week with three friends riding motorcycles through Badlands National Park and visiting Mount Rushmore.

“My wife has never been there, so I know I will be making a return trip out there,” he said. “Places like Yellowstone are on the bucket list as well.”