Florida first in path of rain, wind, flooding after Bahamas hit by Compiled by Democrat-Gazette Staff From Wire Reports | August 2, 2020 at 4:16 a.m. 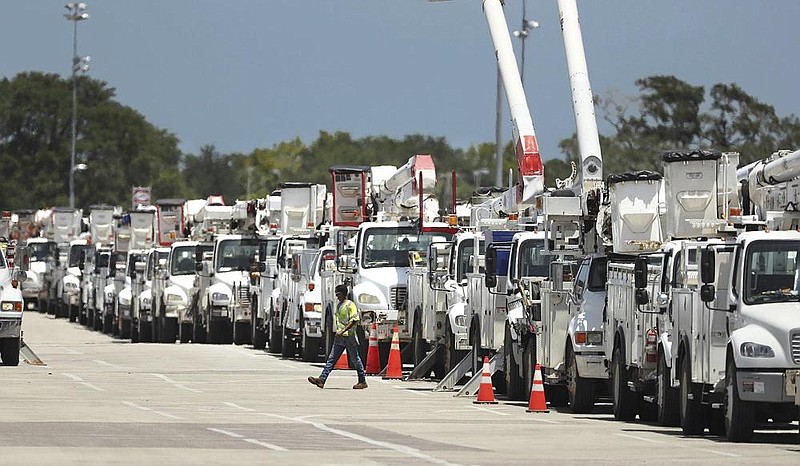 Dozens of utility trucks are lined up Saturday at Daytona International Speedway in Daytona Beach, Fla., before they’re sent to staging centers for the state’s response to Hurricane Isaias. More photos at arkansasonline.com/82isaias/. (AP/Orlando Sentinel/Stephen M. Dowell)

Hurricane Isaias began a multiday assault on the U.S. East Coast on Saturday with hurricane conditions expected over Florida late in the day. The storm, which was a Category 1 hurricane as of the National Hurricane Center's 2 p.m. update, was then expected to churn along the entire East Coast today and into the middle of the week.

Torrential rain, high winds and coastal flooding are expected as far north as Maine. A tropical-storm watch has been issued from Ponte Vedra Beach, Fla. to Altamaha Sound, Ga.

In Florida, hurricane warnings have been hoisted from Boca Raton to the Volusia-Flagler county line. This includes places like West Palm Beach, Jupiter, Vero Beach and Melbourne in the hurricane warning.

Fort Lauderdale is under a hurricane watch, Isaias' approach was expected to take it just far enough north that the city could escape the worst effects.

[Video not showing up above? Click here to watch » https://www.youtube.com/watch?v=5zF7VZ7FUdQ]

Meanwhile, a storm-surge watch covers the zone from Jupiter Inlet to Ponte Vedra Beach. The surge is the storm-driven rise in ocean water above normally dry land, which could lead to several feet of coastline inundation.

Isaias snapped trees and knocked out power Saturday as it blew through the Bahamas. Since Friday, the storm has drenched the southeastern and central Bahamas, buffeting the islands with hurricane-force winds, while also likely producing several feet of storm surge inundation.

The tropical threat approaches as the Sunshine State continues to grapple with a sharp increase in coronavirus cases.

He said that the state and local communities are opening shelters while ensuring proper protocols be taken in the face of the pandemic.

"The most important thing we want people to do now is remain vigilant," DeSantis said.

North Carolina also may be hit hard by the storm from Monday into Tuesday, where Isaias could make a second landfall after slamming the Florida coast. A mandatory evacuation for Ocracoke Island began at 6 a.m. Saturday.

Gov. Roy Cooper issued a state of emergency and urged anyone who needs to evacuate to stay with family members and friends or at a hotel, if possible, because of social-distancing precautions at shelters. Shelters will provide personal protective equipment, Cooper said.

"With the right protection and sheltering, we can keep people safe from the storm while at the same time trying to avoid making the pandemic worse," Cooper said on Twitter. "A hurricane during a pandemic is double trouble. But the state has been carefully preparing for this scenario."

Other states, including Virginia, had issued states of emergency ahead of the storm.

Isaias had maximum sustained winds of near 70 mph around 5 p.m. Saturday, the National Hurricane Center in Miami said. It was expected to regain strength as it heads over warm water toward Florida.

The Hurricane Center expects the shear to be reduced between Saturday and today, while the storm moves over the toasty waters of the Gulf Stream. This may allow Isaias to maintain hurricane intensity, and possibly to intensify slightly.

After the storm makes its closest approach to the Florida Peninsula, potentially making landfall Saturday night or early today, slow weakening is predicted. On Monday, Isaias may drop to strong tropical-storm intensity as it departs Florida's northeastern shores.

Isaias already has been destructive in the Caribbean: On Thursday, while still a tropical storm, it uprooted trees, destroyed crops and homes and caused widespread flooding and small landslides in the Dominican Republic and Puerto Rico.

One man died in the Dominican Republic. In Puerto Rico, the National Guard rescued at least 35 people from floodwaters that swept away one woman, whose body was recovered Saturday.

Despite the approaching storm, NASA says the return of two astronauts aboard a SpaceX capsule is still on track for Sunday afternoon. Doug Hurley and Bob Behnken are preparing to make the first splashdown return in 45 years, after two months docked at the International Space Station. They are aiming for the Gulf of Mexico just off the Florida panhandle, and flight controllers are keeping close watch on the storm.

Jason Samenow, Andrew Freedman and Matthew Cappucci of The Washington Post; and by Danica Coto, Curt Anderson, Tamara Lush and Cody Jackson of The Associated Press.