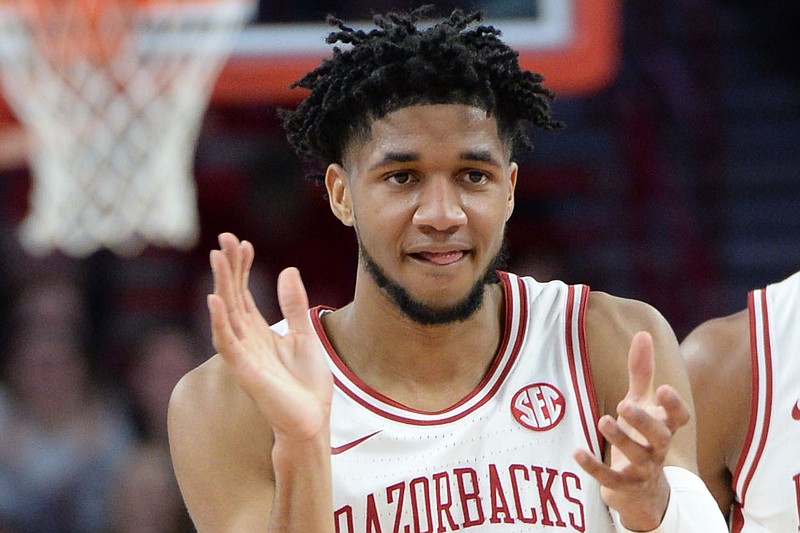 Arkansas guard Isaiah Joe celebrates a 3-point basket Friday, Feb. 21, 2020, during the first half of play against Missouri in Bud Walton Arena in Fayetteville. ( Andy Shupe)

FAYETTEVILLE — Isaiah Joe had his name in the NBA Draft as an early entry for more than three months before making a decision whether to go pro or return to the University of Arkansas.

For Joe's coaches and teammates, as well as Razorbacks fans, it turned out to be worth the wait.

Joe, a 6-5 guard from Fort Smith Northside, announced Saturday he will return to Arkansas for his junior season.

Monday is the deadline for early entries to withdraw from the draft and retain their college eligibility, so Joe almost took it down to the wire. He entered the draft April 20.

The original deadline for early entries to withdraw had been June 3, before the draft was pushed back from June 25 to Oct. 16.

Joe didn't practice with the Razorbacks the previous two weeks as he continued to determine whether he should stay in the draft.

"I know a lot of people have been waiting to hear my decision, but this has definitely been one not to be rushed," Joe wrote on his Twitter account in announcing his return to Arkansas. "After all things considered, I have decided to play my next season at the University of Arkansas and continue my dream as a Hog!"

Joe averaged 16.9 points last season and will be the Razorbacks' top returning scorer.

"We are so excited to have Isaiah back," Arkansas Coach Eric Musselman said in a news release. "He received incredible feedback from the NBA and got valuable experience with NBA interviews. We know how hard of a decision this was for Isaiah and his family.

"Zai's goal is to have a long NBA career and we can't wait to continue helping him reach his dream."

Joe's importance to the Razorbacks was illustrated last season when they were 19-7 with him in the lineup and 1-5 when he didn't play because of a knee injury.

Arkansas suffered through a five-game SEC losing streak while Joe recovered from arthroscopic knee surgery. The Razorbacks beat TCU at home when Joe sat out with knee swelling before it was determined he should undergo surgery. 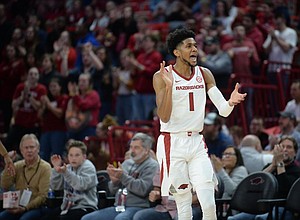 Photo by Andy Shupe
Guard Isaiah Joe — who announced his return to Arkansas for his junior season on Saturday — is one of three players on the Arkansas roster who previously has played for the Razorbacks, along with junior guard Desi Sills and junior forward Ethan Henderson. (NWA Democrat-Gazette/Andy Shupe)

As a freshman, Joe set a Razorbacks season record by hitting 113 of 273 attempts from beyond the arc.

Joe also is a strong perimeter defender who took 27 charges as a freshman and 18 as a sophomore. He has 87 steals in two seasons.

"I have had an amazing couple of years at the University of Arkansas," Joe wrote on Twitter. "Just like being in the NBA, playing at this school has been a dream of mine throughout my childhood.

"I couldn't ask for a better fan base, coaching staff or teammates. I have created a bond with this place like no other."

Joe was one of 60 players invited to the NBA Draft combine, along with former Arkansas teammate Mason Jones, but because of continued concerns about the coronavirus pandemic it's uncertain whether the combine will be held after originally being scheduled for May 21-23.

"The whole draft process has been an incredible experience," Joe wrote on Twitter. "And I am honored to be in the position that I am currently in today."

Joe is one of three players on the Arkansas roster who previously has played for the Razorbacks, along with junior guard Desi Sills and junior forward Ethan Henderson. The Razorbacks' 10 newcomers include four freshmen, three transfers who redshirted last season and three graduate transfers.

"I appreciate everyone who has been in my corner and supported me throughout my career and during this quarantine," Joe wrote on Twitter. "With that being said, there is still a lot to be accomplished and I believe that it all starts here as an Arkansas Razorback!"