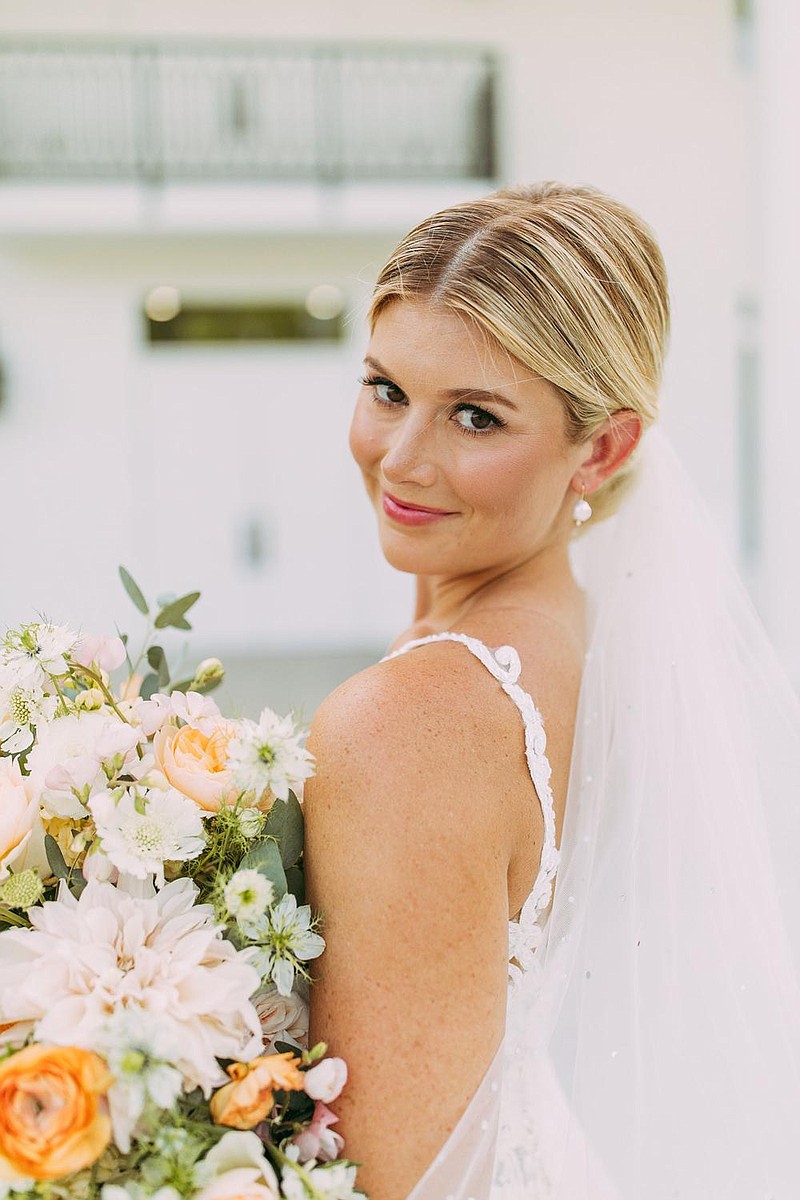 The ceremony site was decorated with a floral wall of white and pink hydrangeas; peach and blue garden roses and white delphinium. Ethan Deeter of Little Rock, cousin of the bride, was a reader. Music was by Hannah Rutherford and Jake Fauber.

Given in marriage by her father, the bride wore a trumpet-style gown of beaded and re-embroidered lace. The bodice had a sweetheart neckline and lace shoulder straps. The skirt, embellished with lace appliques, extended to a chapel-length lace train. She carried a bouquet of blush dahlias, white and peach roses, blush sweet pea and peach ranunculus.

Maid of honor was Amy Womack of Little Rock. Bridesmaids were Morgan Gill of Stuttgart; Tiffany Maxwell of North Little Rock; Brady Escovedo, Allison Schneider and Conley Wortman, sister-in-law of the bride, all of Little Rock; Laura Beth Dixon of Benton, sister of the groom; and Meghan Foster of Fayetteville. They wore strapless chiffon gowns in a soft gray and carried smaller versions of the bridal bouquet.

Flower girl and ring bearer were Mallory Dettelbach and John David Dettelbach, both of Collierville, Tenn., and cousins of the groom. Landon Deeter of Little Rock, cousin of the bride, was a page boy.

Brandon Bilo of El Dorado was best man. Groomsmen were Brody Barker, Brian Duke and Jonathan Dixon, all of Benton; Justin Wortman, brother of the bride, and Cole Anderson, both of Little Rock; Greg Pryor of Nashville, and Rankin Teeter of Dumas.

Guests were seated by Matt Jumper of Palestine; Travis Short of Dallas; and Owen Deeter and Gavin Deeter of Little Rock, cousins of the bride.

A reception, also at Legacy Acres, was held after the ceremony. Columns were wrapped with flower garlands and a cascade of wedding flowers was over the entry. Guests tables held a variety of arrangements with hydrangeas, roses and delphiniums. Music was by Chinatown Band. Assisting were Brooke Lea of Conway, Kimberly Capps of Maumelle, McKenzie Philips of Little Rock and Anna Gibson of Memphis.

The bride has a bachelor of nursing degree from the University of Central Arkansas and is a registered nurse for the North Little Rock School District's Seventh Street Elementary.

The groom has a bachelor's degree in agricultural, food and life sciences and is an account manager at Kaufman Lumber Co.

The couple will live in Little Rock after a honeymoon in Naples, Fla.

CORRECTION: Laura Elizabeth Wortman and Nathan Lane Smith exchanged marriage vows at 6:30 p.m. Saturday, July 25, at Legacy Acres in Conway. The groom’s middle name was incorrect in an earlier version of this story.