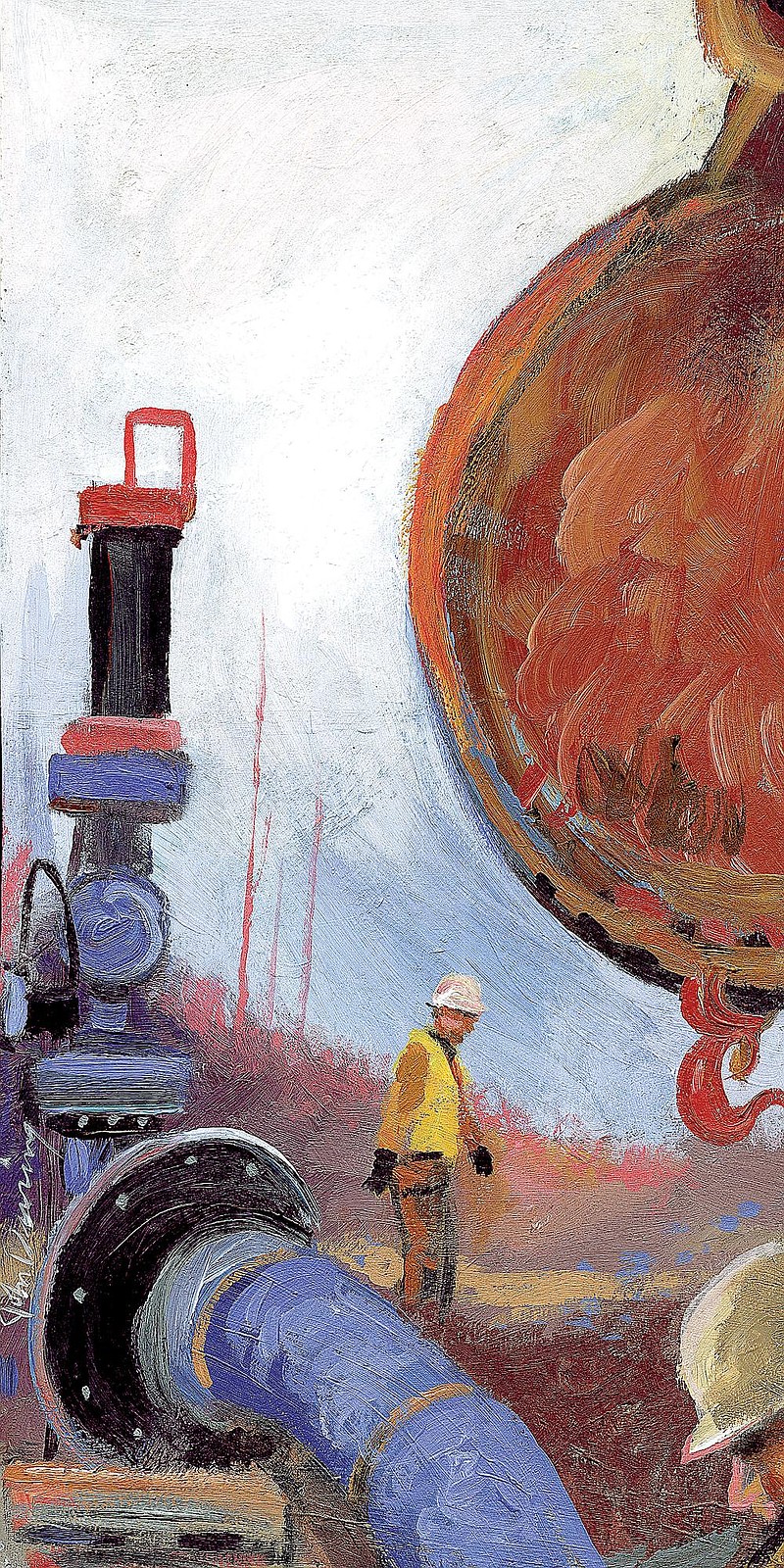 If it had not been for the discovery of oil, El Dorado likely would be a much smaller place these days. The oil boom of the 1920s changed everything here. It produced larger-than-life figures such as Samuel Thompson Busey, T.H. Barton and Charles Haywood Murphy Jr.

We'll spend the night at El Dorado at the midpoint of a trip that will take us through the lower part of Arkansas from Mississippi to Texas on U.S. 82. With its focus on arts, culture and entertainment, El Dorado has become one of the jewels of this part of the country. The history of the oil boom intrigues me, and downtown El Dorado has exhibits and interpretive signage to explain that period and its major players.

Busey was born in Illinois in 1867. He was trained as a physician but later became a geologist. Coming from a family of adventurers, beginning in 1890 he traveled to Bolivia, Peru, Paraguay, Chile and Argentina. For a time, he lived in Mexico City and practiced medicine there. Busey went to Texas in 1901 to look at the Spindletop oil well near Beaumont.

"Afterward, he and a group of investors attempted to drill oil wells near Vera Cruz with mixed results," Kenneth Bridges and John Ragsdale wrote for the Central Arkansas Library System's Encyclopedia of Arkansas.

"As the Mexican Revolution erupted in 1910, Busey closed his medical practice and once again resumed traveling. He eventually made his way to Bolivia, involving himself in a number of business activities. He organized the financing of the first successful rubber plantation in Bolivia and in 1915 successfully completed an oil well in that country. He returned to the United States, excited by his success in Bolivian oil. He lived for a time in New Jersey, Oklahoma and Louisiana in the late 1910s, continuing to explore for oil.

"In 1920, a well east of El Dorado was drilled and showed a large natural gas flow. Busey was in Homer, La., about 40 miles away, and rode a horse to El Dorado to confirm the well information the next day. Unable to find a room, Busey bought the Arcade Hotel for $2,500. By this time, the Mitchell-Bonham Drilling Co. had acquired drilling rights on the 80-acre David R. Armstrong farm southwest of El Dorado. It had drilled a well to a depth of about 1,700 feet, but operations were suspended for financial difficulties.

"On Nov. 15, 1920, Busey met with local investors and took 51 percent ownership of the company, along with rights to the well, all tools and the 80-acre tract that was being drilled."

Drilling resumed, but Busey had to sell some shares of the company in order to meet drilling expenses.

Bridges and Ragsdale explained what happened next: "On Jan. 10, 1921, at 4:30 p.m., the Busey No. 1 well, as it was then named, was drilled to a depth of 2,233 feet and struck oil. Oil erupted to the surface, spraying the area for more than a mile around. Busey's rich discovery well produced an astounding 15 million to 35 million cubic feet of natural gas and between 3,000 and 10,000 barrels of oil and water daily. This led to the oil boom that began petroleum development in Arkansas.

"A frenzy struck El Dorado as thousands of speculators swarmed into the area seeking their fortunes, with Busey credited for it all. He quickly sold the hotel for $5,000 and was besieged by offers for the well. People sent money from all over the country to Busey for him to invest in the new south Arkansas oil industry. He declined the offers for the well and quietly returned the money sent to him. He began drilling in other areas of Union County."

Busey later believed oil would be found near Monticello. He predicted that Monticello would be "the next El Dorado," but no oil reserves were found there. He operated oil leases in the El Dorado and Smackover area until 1928, when he sold his Arkansas properties. He later lived in Michigan, Maryland and Pennsylvania, and died in 1962 in Maryland.

Barton, whose name lives on with Barton Coliseum in Little Rock, was born at Marlin, Texas, in 1881. He attended Texas A&M for a time, served in the U.S. Army from 1901-04 and then found his way to Arkansas, where he worked in the lumber and banking industries in Dallas County. He was in the U.S. Army Reserve from 1920-36, when he was discharged with the rank of colonel, and was widely known as Col. Barton for the rest of his life.

Barton arrived in El Dorado in January 1921, a few days after the Busey No. 1 struck oil. He organized the El Dorado Natural Gas Co. and expanded it into the Natural Gas & Fuel Corp. three years later. He sold that company to Cities Service Co. in 1929 after having become the principal stockholder in the struggling Lion Oil Refining Co.

Barton had planned to slow down and travel the country with his wife, but those plans had to be put on hold in 1929 when he agreed to serve as Lion's president.

"In 1937, Lion drilled the wildcat discovery well in the Shuler Field, 15 miles west of El Dorado. Barton leased 7,000 acres and initiated development in a field that ranked second only to the Smackover discovery. By 1955, the company employed 3,000 people. Lion products were sold by 2,000 service stations across the South."

Barton became a leading Arkansas philanthropist. He worked with the Arkansas Livestock Show Association, which named Barton Coliseum for him when it was dedicated in September 1952. He also was a major donor to what's now the University of Arkansas for Medical Sciences in Little Rock along with institutions in El Dorado such as Warner-Brown Hospital, Barton Library and Memorial Stadium. He died in December 1960 at his home in El Dorado.

Another oil baron who remained in El Dorado was Murphy, who died in March 2002 at age 82. He was born in El Dorado in March 1920. His father had moved there in 1904 to operate a bank. By 1907, the elder Murphy owned 13 banks in Arkansas and the Indian Territory (now Oklahoma). The elder Murphy also built a sawmill south of El Dorado.

In 1946, Charles Murphy Jr. and his three siblings pooled their business interests into an enterprise known as C.H. Murphy & Co. That company was incorporated as Murphy Corp. in 1950 and Murphy Oil Corp. in 1964. Charles Murphy Jr. served as president until 1972 and as chairman until 1994.

Deltic Farm & Timber Co. was spun off from Murphy Oil Corp. in 1996 to form Deltic Timber Corp. The company owned thousands of acres of timberlands in Arkansas and Louisiana, along with mills at Waldo and Ola. In 2018, Deltic merged with the larger Potlatch Corp. of Seattle--which had long had operations in Arkansas--to form the PotlatchDeltic Corp.

Murphy Oil's retail gas sales increased tremendously after an agreement with Walmart to operate stations in the parking lots of the company's stores. The retail operations were spun off in 2013 into Murphy USA. Murphy Oil, which now focuses on exploration and production rather than retail sales, announced earlier this year that it was moving its headquarters from El Dorado to Houston. Murphy USA, which employs far more people in El Dorado than Murphy Oil, will maintain its headquarters in Arkansas.

The chemical industry also remains strong in El Dorado, dating back in part to the Ozark Ordnance Works. The federal War Department informed U.S. Rep. Oren Harris of El Dorado in October 1941 that it had approved $23 million for an ammonia plant. Ozark Ordnance Works produced ammonia and ammonium nitrate used in manufacturing explosives and in filling bombs and shells. The plant was built and operated by Lion Oil.

In a 1947 interview Barton said: "When we were negotiating for this plant, the War Department told us flatly we couldn't produce ammonia from natural gas. They did not know us Southerners. It took a lot of talk and argument, but we finally won out."

Lion hired 17 engineers and immediately sent them to Canada for training. Production took place from 1943 until the end of World War II in 1945. The building that housed the gas engines that produced electricity to power the plant was the size of two football fields. There were almost 700 employees during the war.

After World War II, Lion continued production for commercial purposes. Monsanto merged with Lion's chemical division in 1955 and operated the plant under the Monsanto name until July 1983. It was sold to El Dorado Chemical Co. that year.

We continue the trip west on U.S. 82, leaving Union County and finding ourselves in Columbia County, the only county in the state not to have a river. As in neighboring Union County, the oil and gas industry was important to the area economy. The Magnolia Oil Field was discovered on March 5, 1938.

"Gushing oil topped the Barnett No. 1 derrick," wrote Mike McNeill of the online news site Magnolia Reporter. "This led almost overnight to the development of an oil and gas exploration industry within Columbia County that continues today. While the importance of oil and gas drilling declined steadily, a new natural resources industry arrived in the mid-1960s as chemical companies discovered the high bromine content of brine located thousands of feet beneath the earth's surface. Bromine is an element used in numerous chemical and manufacturing processes.

"On Jan. 18, 1966, Dow Chemical Co. broke ground for a bromine plant four miles west of Magnolia. A second plant soon followed (a joint venture of Ethyl Chemical Corp. and Great Lakes Chemical). Both plants were consolidated under the ownership of Albemarle Corp., which owns dozens of brine wells and pipelines that crisscross Columbia and Union counties."

Though the oil and gas industry has declined in Columbia County, the timber industry remains important. The real driver of the economy in the county seat of Magnolia continues to be the presence of Southern Arkansas University.

"Higher education in Columbia County became a reality with an act of the 1909 Arkansas General Assembly, which authorized four agricultural high schools in the state, combining training in agriculture with high school-level courses," McNeill wrote. "County residents offered the state an inducement of $50,000 plus 390 acres just north of Magnolia for what became known as the Third District Agricultural School. The first classes were held on Jan. 11, 1911.

"The General Assembly authorized the Third District Agricultural School to become a junior college, and in 1925, the school was renamed Third District Agricultural & Mechanical College. High school courses were dropped in 1937, and in 1949, the school became a four-year institution. The name was changed to Southern State College in 1951. SSC was renamed Southern Arkansas University in 1976. SAU is best known for its degree programs in business administration, agricultural education, elementary and secondary education and nursing."

"The Farmers Educational and Cooperative Union had campaigned vigorously in Arkansas and other states for these vocational high schools, an education reform of the Progressive Era," wrote James Willis, a former history professor at SAU who wrote a book about the school. "Communities bid money and land in efforts to become sites for the Arkansas schools."

It's time to continue the trip west. We'll cross Lafayette and Miller counties, ending on the state line at Texarkana.