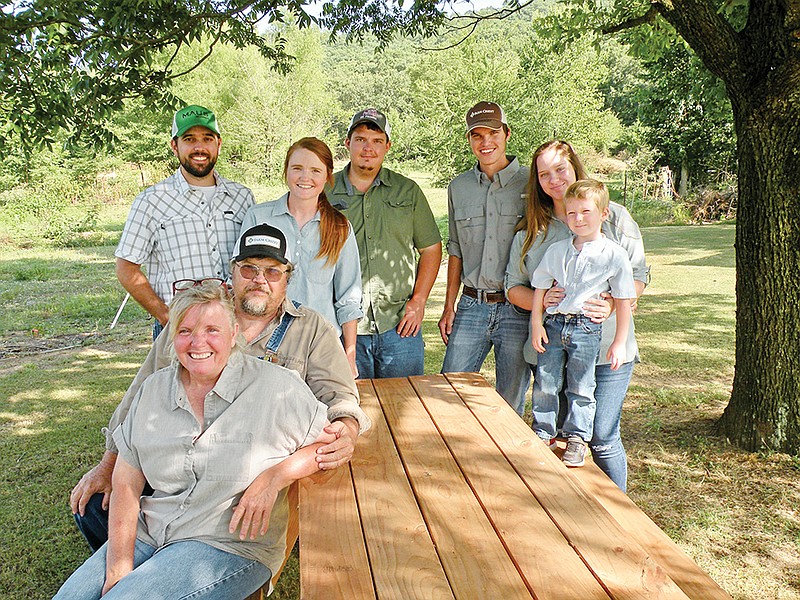 The honor of being the Perry County Farm Family of the Year has come full circle for Dena Johnson and her family.

Dena Johnson, 57, and her husband, Quinten Johnson, 61, have been named the 2020 Perry County Farm Family of the Year. The Johnsons have three adult children — James Johnson, 26, Samantha Nahlen, 24, and Matthew Johnson, 20. They raise turkeys and cattle on their 750 acres that spill over into three counties — Perry, Conway and Yell.

“It’s come full circle for our family,” Dena said, smiling, as she sat in the living room of their home in the Perry County community called Bryant’s Cove, named for the Bryant’s Cove Cemetery that’s just down the road in Conway County. “Mom and Dad just had me and Kenny, and now we’ve all been recognized for farming.

“Farming is important,” she said. “We’ve all got to eat. Cattle farmers, turkey farmers, row-croppers … all of us put food on the table. We’re proud to be farmers. It takes us all.”

The Johnsons’ seven houses of turkeys are under contract with Butterball LLC and are processed at the company’s plant in Ozark. The Johnsons sell their cattle at local sale barns. They sell turkey litter to surrounding farmers for fertilizer. They also have a 40-acre timber plantation.

Quinten is a son of Dean Johnson of Pontoon [in Conway County] and the late Charlie Johnson. Quinten graduated from Dardanelle High School in 1977 and “went to work.”

“Dad worked for Winrock [Farms] for 47 years,” Quinten said, laughing. “He helped build it. He worked with the cattle, too, down in the bottoms.

“I started working at Winrock Farms in 1975 as a tractor driver. I quickly realized I wanted to work for myself. I sold my first herd of cows in 1979 for a down payment on 20 acres and a hen house under contract with Tasty Bird.”

Dena graduated from Perryville High School; her family raised broilers on their farm. She met Quinten after both of them graduated from high school, and they married in 1982.

“With a farm, there are always setbacks,” Quinten said. “In 2015, we were working with a 38-year-old breeder-hen house under [contract with] Tyson Foods. Faced with the age of our hen house, we were in a situation where we either had to quit farming full time or build back.

“The kids wanted to continue farming, so we built three houses and started raising turkeys,” Quinten said. “Then we built four more houses.

“It’s all for the kids. We have about 100,000 birds in the houses at one time, changing them out three or four times a year. We raise them to a certain weight. Butterball sends a truck to get them; then we do an intensive cleaning. There’s about three weeks in between the time the birds are taken away and new ones are brought in.”

“We’ve done well and made a little,” she said, laughing. “That’s how farming is.”

The Johnsons’ older son, James, works full time at ConAgra in Russellville, but he helps with the farm when he can.

“James will help with any of our day-to-day needs when his schedule allows,” Quinten said.

The Johnsons’ daughter, Samantha, works full time on the farm.

“She is involved with every aspect of it,” Quinten said.

Samantha and her husband, Austin Nahlen, have been married 3 1/2 years. She attended the University of Arkansas Community College at Morrilton, where she studied business management. Austin also attended UACCM, where he met Samantha. He is now a salesman at Greenway Equipment in Morrilton.

“Austin’s always ready to help on the farm any way he can,” Quinten said.

The Johnsons’ younger son, Matthew, and his wife, Bethany, have a 3-year-old son, Chance, and are expecting their second child. Matthew works full time on the farm. Bethany attends UACCM, where she is studying accounting and plans to transfer to the University of Central Arkansas to complete her degree.

“Chance checks the cows with us,” Quinten said, smiling.

“I work with Daddy and mow with Nana (Dena),” Chance said.

Quinten said their farm is “already … set for our children to take over.”

“Using new technology, implementing quality genetics to improve the cattle herd and simply reclaiming clear-cut tracts to expand the pasture are just a few of the improvements we have done,” Quinten said.

“We’ve got too much knowledge we need to give these kids,” Dena added, also laughing. “We’ve never had time for hobbies, so we wouldn’t know what to do if we retired.”