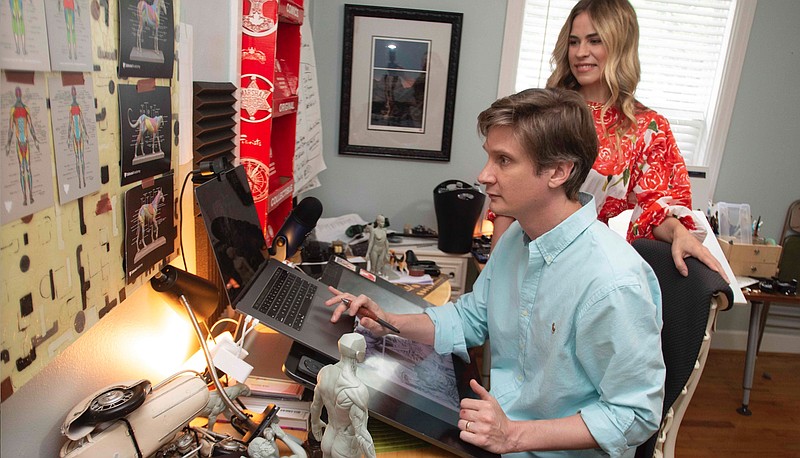 Welcome to the Allegiance Arts Universe.

This is where a legendary lawman keeps an uneasy peace in the American West; a time-traveling teenage girl battles Norse gods and monsters; a trio of foes in ancient India search for the lost city of Shambhala; and a Dust Bowl, Depression-era hero in a cape and cowl fights evil.

And it all takes place in comic books.

The first issues — or episodes, in company parlance — of each series hit Walmart stores May 5; the second episodes arrived in July.

Yes. The 24-page comics, which sell for $4.98 each, are at more than 3,000 Walmart locations on end caps in the book and magazine section.

Individual comics at the giant retailer have been a rarity, and the Breitweisers saw an opportunity to get their books to a market — children and young adults — that might not have access to a comic book store.

"Mitch and Elizabeth knew where comic books were not," says their Chief Operating Officer, writer and editor Patrick Stiles.

It's a Wednesday morning in late July and the Breitweisers are talking in the sunroom of their Little Rock home, which smells like a florists' shop thanks to Elizabeth's potted plants and flowers. Their two cats prowl in and out.

Mitch, 42, grew up in Benton, and 37-year-old Elizabeth is from Beebe. They studied art at Harding University, though not at the same time, and have been married since 2007.

Mitch was a voracious reader who was writing his own stories and drawing even before he started reading comics.

"My dad brought some comics home one day when I was 11 or 12 and it just clicked," he says. "Somebody was making stories and art together in this incredible, magical package, and it just draws you in."

In 2000, he moved to Cliffside Park, N.J., and started trying to break into the comic book industry in New York.

After five years, he landed a gig with Marvel comics drawing "Drax the Destroyer" that led to a contract with the giant publisher and found Mitch working on titles like "Captain America" and "Hulk."

He also moved back to Arkansas and met Elizabeth.

Growing up, she would read her brother's "Batman" comic books but wasn't exactly a comic nerd.

"I never really got into the stories, but I loved the artwork," she says.

She liked to draw but didn't dive into art until college, where she studied sculpture and painting.

Mitch was working on "Captain America: Operation Zero Point" and asked whether Elizabeth had ever considered being a comic book color artist.

"The industry really needed good color artists at that time," she says. "So I started coloring his pages for fun and for portfolio use. He showed them to his editors and they liked the work and they decided to use them."

When their contracts ran out in 2013, they left Marvel.

"Our goal was to build our fan base and start creating our own stories," Elizabeth says.

They started an illustration business, and Elizabeth kept doing coloring work with writer Ed Brubaker on titles like "Kill or Be Killed" and "The Fade Out" and with "Walking Dead" co-creator Robert Kirkman on his book "Outcasts."

Mitch, with longtime friend and fellow Harding grad Stiles, was working toward developing new properties, which eventually became the stories in the new books.

"We have this body of ideas that we have shared and worked on since college," Mitch says. "Through hours and hours of hanging out and phone conversations and talking about stories ... that is kind of what created all of these worlds."

Content is king, as they say, but the Breitweisers needed a way to get their content to the people.

The success of the campaign led them to team with David Martin, CEO of Allegiance Consulting Group in Little Rock.

They pitched him their idea for selling comic books at a large retailer and not just comic book stores and hobby shops.

"Most people that we meet day to day that are fans say they [discovered comic books] at Kroger or at a drugstore in their small town," Mitch says.

Martin, who is listed as a founder on the comics' masthead (Mitch is CEO and founder, Elizabeth is president, publisher and founder), helped connect them with other investors.

In October 2018, they found themselves pitching their venture to Cameron Smith of Cameron Smith & Associates, a consumer packaged goods recruiter in Bentonville.

"They had the presentation down tight," Smith says. "When I read their bios and what they had done and they showed me their work, I was really impressed ... I really believe in these kids. They are the real deal."

Smith, who became an investor, assembled another meeting that included a former Disney executive and representatives for Readerlink Distribution Services LLC, which distributes most of the books found in Walmart. 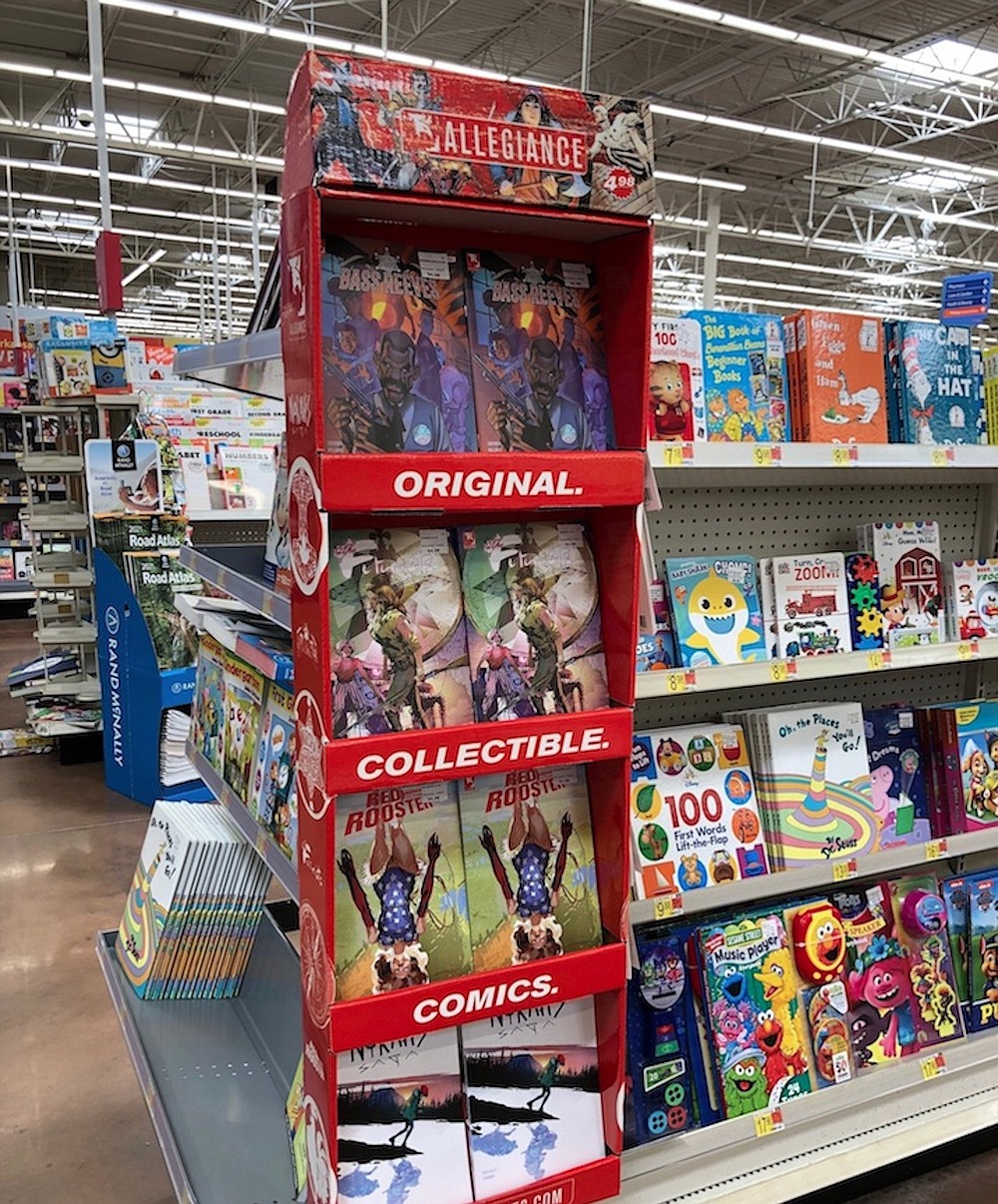 About a week before Christmas, the couple learned they were in. Their books would be sold at Walmart. All they had to do now was write, draw and print them.

The Breitweisers' new venture attracted writers David Grevioux and Blake Northcott and artists Bruce Guice and Kelsey Shannon, among others.

Northcott, who lives near Toronto, is a novelist and writes for DC's "Catwoman."

A self-described "liberal Canadian author," she writes "Norah's Saga," which is set in Canada and illustrated by Kelsey Shannon.

"The first thing I realized about Allegiance was the diverse range of people they wanted to bring in, and the diverse stories they want to tell," says Northcott. "Myself ... Kevin Grevioux of 'Underworld' movie fame, who was set to write a story about Bass Reeves. It was all very interesting to me."

She says she was intrigued by the art for "Norah's Saga."

"When I saw the concept art and they walked me through the story, I immediately started forming ideas and thinking about which direction I would take it. [Mitch and Elizabeth] were both so generous creatively; they told me I could write my own outline and really make it my own, which was very attractive to me."

"Bass Reeves" illustrator David Williams worked with Elizabeth when she colored some of his covers for DC. Williams says he was actually planning his own Reeves-inspired, fantasy-oriented story before being contacted by Mitch.

"The fact that Mitch wanted to do something a little more accurate with a little more flair, I was like, yeah, I'm with it," he says.

Williams says he wanted to move away from the look of a typical Western "and push myself into directions I wasn't allowed to do at Marvel and DC. I get to make the characters a little bit more animation-friendly, a little more expressive. It's more of a visceral expression of what Bass Reeves looks like."

He also brought writer Grevioux to the project.

"We've been wanting to work together for years and this was the perfect opportunity for us," Williams says.

Along with helping run the company and manage the titles, Mitch is illustrating "Red Rooster" and co-writing the story with Mark Pellegrini. Elizabeth is the colorist.

The "Red Rooster: Golden Age" crowd-sourcing campaign is over, but the comments section on its Indiegogo page is still quite active, mostly from disgruntled contributors who have been waiting more than two years for content and now want their money back.

The campaign raised $197,434 from 3,582 backers, but while the "Red Rooster" comic book has been available in Walmart since May, none of the items promised in the 2018 campaign — ranging from signed copies of the comic, stickers, sketchbooks and original art and gallery prints — have been delivered.

"Opportunities started heading our way during the crowdfund," Mitch says. "We got overwhelmed really quickly."

He says donors will get their books "sometime in September. I'm working on the last few pages of it now."

He also says he has given "tens of thousands of dollars in refunds ... I empathize with those who backed the project and those that have seen a delay in getting the project. I certainly understand why a lot of people are upset."

The campaign was originally pitched as a 60-page graphic novel, square-bound, with gold foil on the cover.

"We are going to deliver that and quite a bit more," Mitch says. "It's now a 70-page graphic novel, and they will also get some extra goodies for their patience."

A smaller Allegiance Bundles campaign for first issues of the other three titles was held in 2019 and its contents were delivered on time, according to Mitch.

"Scale back and get more work done in advance," were two of the lessons learned from the "Red Rooster" effort, he says.

The new episodes of the company's titles will appear in September, and readers will get to jump back into the adventures of "The Futurists" characters, Reeves, feisty Norah and Red Rooster. 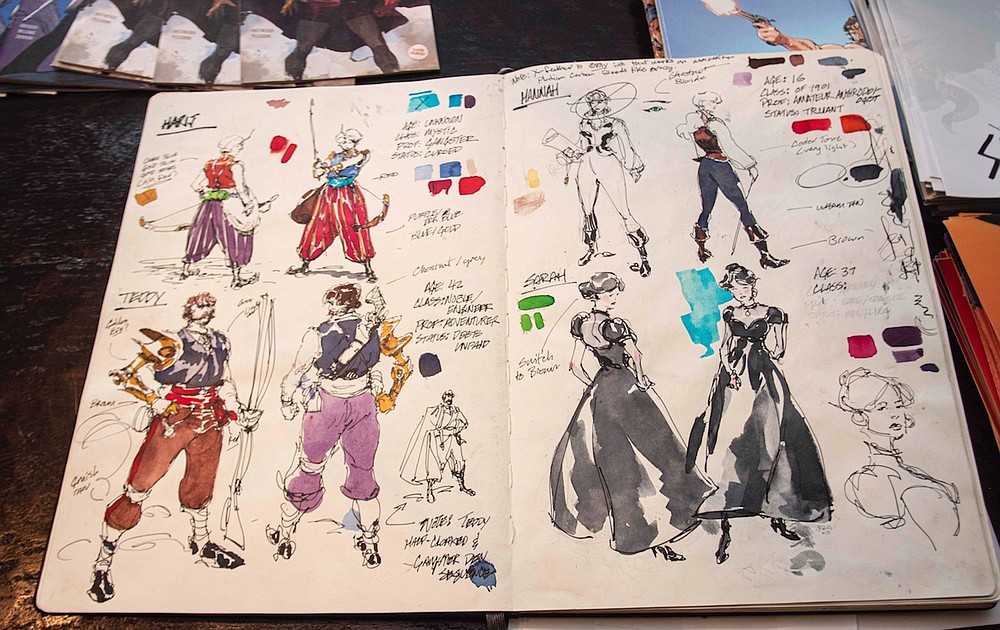 Smith says that even during the pandemic, sales of the first two issues were rated by Readerlink as "B to B-plus."

"We're very proud that we are able to provide top-quality escapism for people when they need it most," Elizabeth says.

The Breitweisers see potential for their nascent operation to expand beyond the colorful pages of a book and into movies, video games, television series and animation.

But it all starts with characters drawn and written in a comic and the connection a reader can find with the right combination of timing, story and images.

"I have a theory," Mitch begins, "that when you're at that age — 11, 12, 13 — and you are in a store and you find [a comic book that] that opens your mind up, it sets off a chemical reaction in your brain and you bond with that thing; the smell of it, the look of it, the texture, the way it ignites your imagination. That chemical reaction is nostalgia, and we continue to chase that the rest of our lives."

"It's a great American art form," Elizabeth says. "And we are very grateful for the opportunity to get this art form to kids and new comic book readers."

CORRECTION: Greg Adams is the author of “Adam Gets Back in the Game” and is the Program Coordinator for the Center for Good Mourning and Staff Bereavement Support at Arkansas Children’s Hospital. A previous version of this article misidentified him.