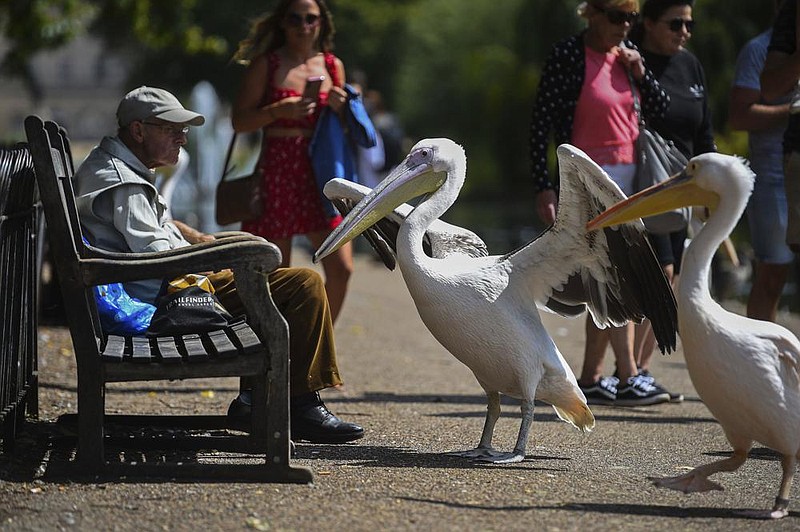 Pelicans approach a person on a bench Monday in St. James’ Park in London. (AP/PA/Kirsty O’Connor)

JERUSALEM -- The Israeli military said it thwarted an infiltration attempt from Syria early Monday staged by four suspected militants it accused of trying to plant explosives.

Lt. Col. Jonathan Conricus, a military spokesman, said Israeli troops earlier spotted "irregular" activity in the Golan Heights. Israeli troops opened fire on the suspected militants, some of whom were armed, after observing them placing the explosives on the ground, Conricus said.

There was no official confirmation that the four suspected attackers were killed, but a grainy video released by the army shows four figures walking away from barbed wire marking the frontier. The four then disappear in a large explosion that engulfs the area.

The Israeli military has not said if the four are suspected of ties to Iran or Hezbollah, two Syrian allies. However, Conricus said Israel held the Syrian government responsible for the incident.

Addressing Likud party lawmakers, Prime Minister Benjamin Netanyahu said Israel "thwarted an attempted sabotage on the Syrian front" and would continue to "harm all those who try to harm us and all those who harm us." 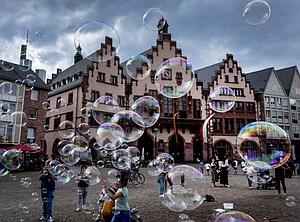 Photo by AP
A street artist makes bubbles Monday in front of the Town Hall in Frankfurt, Germany. (AP/Michael Probst)

PARIS -- France has decided not to ratify an extradition agreement with Hong Kong after China's central government in Beijing imposed a new national security law on the city.

The French Foreign Ministry's spokesperson said in a written statement Monday that "in light of the latest developments, France won't proceed with the ratification" of the 2017 extradition agreement with Hong Kong "as it stands."

Australia, Canada, New Zealand, the United Kingdom and the United States suspended their extradition treaties with Hong Kong last month amid fears that the Chinese government was infringing on the city's freedoms and local autonomy.

Germany made a similar decision last week following the disqualification of 12 pro-democracy candidates from Hong Kong legislative elections and a subsequent decision to postpone the vote by a year.

China says the new security law is needed to combat terrorism and separatism and to prevent Hong Kong from becoming a base for undermining Chinese state power.

Hong Kong, a former British colony, was handed over to Chinese control in 1997.

CAIRO -- Yemen's Houthi rebels claimed they shot down a U.S.-made drone over the country's northern border with Saudi Arabia. The U.S. military said later Monday that no American aircraft had been lost.

A Houthi military spokesman, Brig. Gen. Yehia Sarie, said in a statement that their air defenses downed the drone Sunday over the district of Harad in Yemen's northern Hajjah province. He said it was an AeroVironment RQ-20 Puma drone.

Footage later aired by the Houthi's Al-Masirah satellite TV channel showed rebel fighters gathered around the hand-launched drone, which appeared to have bullet holes in it. The battery-powered drone had a camera, also apparently struck by a bullet.

Masking tape on its tail bore what appeared to be the palm-tree and crossed-swords logo of Saudi Arabia, and Arabic written on the side read "God Bless You," an inscription common on Saudi aircraft.

The Saudi military, which has been fighting the Houthis since 2015, is not known to operate this drone. A Saudi military spokesman did not immediately respond to a request for comment.

First used by U.S. special forces, other arms of the American military now use the unarmed drone for surveillance.

However, the U.S. military's Central Command later said there were no indications that any U.S. aircraft has been lost, saying in an email to The Associated Press that "all U.S. military assets have been accounted for."

BEIJING -- Vulnerable coastal areas were being evacuated and fishing boats recalled to port before a typhoon was expected to bring heavy rains to eastern China late Monday as much of the country is still recovering from unusually summer heavy flooding.

Typhoon Hagupit had gusts of up to 56 mph at its center and was moving northwest at 16 mph.

China's National Meteorological Center said Hagupit is expected to come ashore between Zhejiang and Fujian provinces. Shanghai is expected to feel the effects.

Ferry services and some trains have been suspended and 4,481 passengers were taken off boats in waters off the Zhejiang coastal cities of Wenzhou and Tanzhou.

This year's typhoon season has been relatively mild in China, although flooding since June along its major river systems has caused scores of deaths, forced about 2 million people to be evacuated and caused more than $7 billion in damage.