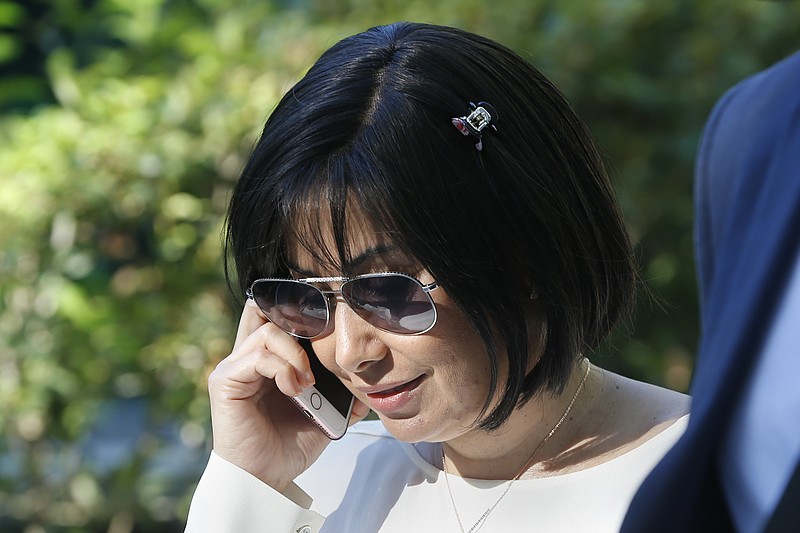 FILE - In this Sept. 24, 2018 file photo, Claudia Patricia Diaz Guillen, the former nurse of late Venezuelan President Hugo Chavez, leaves the national court in Madrid, Spain, where she fought and won a case of extradition at Venezuela's request for alleged money laundering. It was 2014 when Diaz, then Venezuela's former treasurer, was looking for a safe haven to store the unexplained wealth she had accumulated over the years, and allegedly turned to one of the oldest ways of moving vast sums of money anonymously: buying gold. (AP Photo/Paul White, File)

MIAMI -- It was 2014 and Venezuela's former treasurer Claudia Diaz was looking for a safe haven to store the unexplained wealth she had accumulated over the years. Then-president Hugo Chavez, who she once served as a nurse, had recently died and with the election of Nicolas Maduro, the nation's politics and relations with the U.S. were in tumult.

So Diaz allegedly turned to one of the oldest ways of moving vast sums of money anonymously: buying gold.

In quick succession a shell company established in the Caribbean island nation of St. Vincent and the Grenadines that she allegedly controlled purchased 250 gold bars valued at more than $9.5 million, according to court records from Liechtenstein obtained by The Associated Press.

The bars were stored at a private vault in the tiny European principality available to Diaz and her son after his 18th birthday. A few years later, a nearly identical amount of bullion was sold by a representative of Diaz, with much of the proceeds deposited into a Swiss bank.

Those transactions are now at the center of an international criminal investigation into the network of shell companies and dodgy Swiss bankers that have helped turn Venezuela into one of the most corrupt countries in the world.

While as much as $300 billion is estimated to have been raided from Venezuela's state coffers in two decades of socialist rule, investigators' understanding of how the money was laundered is still emerging.

With a reputation for secrecy and the world's highest income per capita, Liechtenstein has long been a banking magnet for the world's uber-rich. But like neighboring Switzerland, with whom it shares a currency and customs union, its reputation as a freewheeling offshore financial center has been rocked by scandal.

Spurred by pressure from the U.S., which has indicted numerous Venezuelan officials and sanctioned Maduro's government for financial crimes throughout the world, the two countries are now doing their utmost to expose corruption in Venezuela.

Details of the investigation into Diaz and five alleged associates come from a 14-page legal assistance request sent Nov. 22 by a court in Liechtenstein and the response two weeks later by prosecutors in Geneva pledging cooperation. A translated copy of the petition, and the Swiss response, were provided separately to the AP by two people on the condition of anonymity because the probe is ongoing.

The state court in Liechtenstein confirmed the authenticity of the request. Switzerland's attorney general's office said it transmitted the information in May but is not conducting any criminal proceedings at the moment.

Diaz, 46, was a former petty officer in Venezuela's navy who took care of an ailing Chavez before the Venezuelan leader died of cancer in 2013. In 2011, Chavez named her Venezuela's national treasurer. She was replaced when Chavez's successor Maduro was elected in 2013. Diaz and her husband, Adrian Velasquez, currently live in Madrid, where they were briefly arrested in 2018 on a Venezuelan warrant.

In addition to the probe in Liechtenstein, the couple has been sanctioned in the U.S. for their alleged involvement in a $2.4 billion currency scheme and are identified as unnamed co-conspirators in a Miami federal indictment against Diaz's predecessor as treasurer. Spanish prosecutors are also investigating their purchase of a $1.8 million apartment in Madrid.

Ismael Oliver, the Madrid-based lawyer of both Diaz and her husband, said that his clients had "no knowledge, official or otherwise," of the investigation by Liechtenstein.

"She radically denies having had any gold ingots or any bank account in Liechtenstein," Oliver said

Information for this article was contributed by Aritz Parra, Jamey Keaten and Randy Herschaft of The Associated Press.