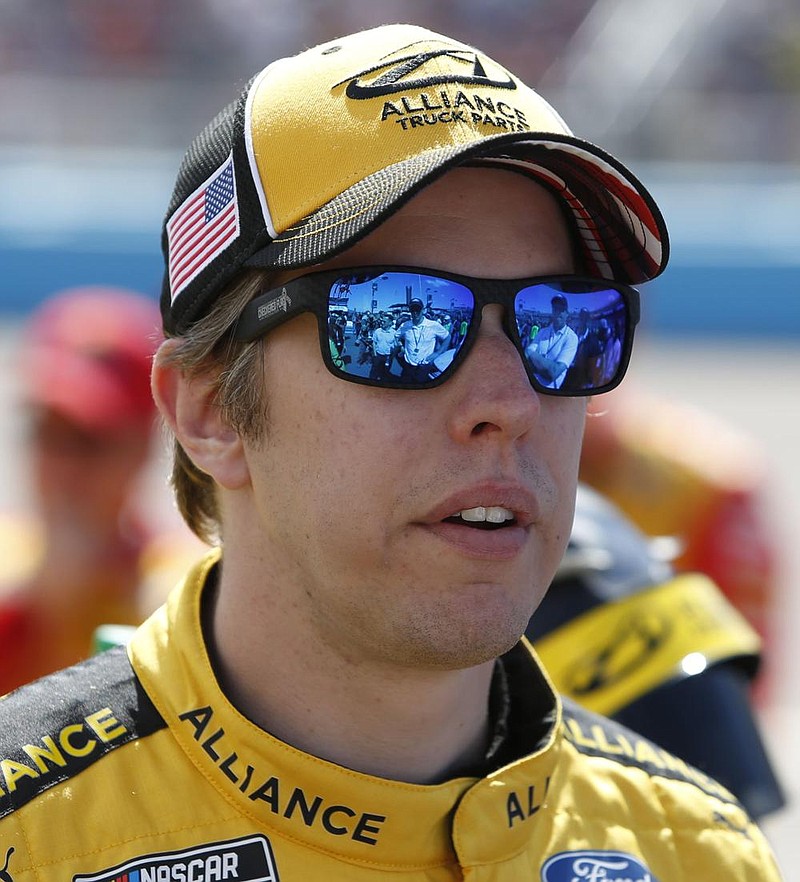 Keselowski to stay with Penske

Brad Keselowski got a contract extension from Team Penske that was announced the day after NASCAR’s 2012 champion won his third race of the season. Keselowski has been open about his desire to remain with the organization where he gave Roger Penske his first NASCAR championship. The 10-week shutdown b e c a u s e of t h e coronavirus pandemic prolonged extension talks, but a deal was announced Monday. Terms were not released, but a person familiar with the contract said the extension is one year through 2021. Keselowski won Sunday at New Hampshire and trails only Denny Hamlin (five wins) and Kevin Harvick (four) in Cup wins this season. All three of Keselowski’s victories have come since the season resumed in May and with a new crew chief.

Former wrestling star Dwayne “The Rock” Johnson said he has acquired the XFL. The 48-year-old Johnson made the announcement Monday on Twitter. The price reportedly is $15 million. The XFL had eight franchises and played five games out of a planned 10-game schedule before canceling the remainder of its season in March because of the coronavirus pandemic. It drew decent TV ratings early on and had deals with ESPN and Fox. The league suspended operations and laid off all of its employees April 10, then filed for bankruptcy protection April 13. Since ending his wrestling career, Johnson has became a movie star, including in the “Fast & Furious” and “Jumanji” franchises. A previous version of the XFL also played one season in 2001.

Philadelphia Eagles Coach Doug Pederson said he feels great and has no symptoms after testing positive for covid-19. He is quarantining at home away from family members and plans to run the team virtually while assistant head coach Duce Staley handles leadership duties during training camp. “I know this virus affects people differently, and I’m respectful and mindful of that,” Pederson said in a video conference Monday. “I feel great. Energy level is high. Really no symptoms whatsoever. I’m very fortunate.” The 52-year-old Pederson is entering his fifth season as Philadelphia’s head coach. He has led the Eagles to three consecutive playoff appearances and the franchise’s first Super Bowl victory after the 2017 season. Pederson is the second NFL head coach known to test positive. New Orleans Saints Coach Sean Payton said he had the virus in March.

TE Reed hooks up with 49ers

The San Francisco 49ers got training camp started by agreeing to a one-year contract with a free agent tight end Jordan Reed. The team agreed to an incentive-laden deal with the oft-injured former Pro Bowler on Monday, giving the defending NFC champions a receiving tight end to pair with All-Pro George Kittle. The 30-year-old Reed had 329 catches for 3,371 yards and 24 TDs in 65 career games for Washington, but he has ended up on the injured reserve list in four of his seven seasons. He missed all of 2019 after suffering his seventh documented concussion in the preseason. Reed’s best season came in 2015 when he had 87 catches for 952 yards and 11 touchdowns for Washington. He has played only 31 games the past four seasons because of a variety of injuries.

OT for Broncos opts out

Right tackle Ja’Wuan James informed the Denver Broncos on Monday s opting out of the 2020 season over coronavirus concerns. The Broncos were counting on their headliner from last year’s free agent class to bounce back from a balky right knee that limited him to three appearances in 2019 after signing what was at the time the biggest contract ever for a left tackle, $51 million over four years. Elijah Wilkinson, who had offseason foot surgery, was activated off the PUP list and will fill in for James for the second consecutive season. James played just 63 snaps in his first season in Denver after the Broncos signed him to a deal that included $32 million in guarantees. He got hurt on the 10th play of the season and didn’t return until midseason when he tore scar tissue and the meniscus in his right knee. He returned in December but only played the first half at Houston as his knee kept buckling on him.

Shohei Ohtani has a right forearm strain that will prevent the Los Angeles Angels’ two-way star from throwing for at least four to six weeks, possibly ending his season as a pitcher after two starts. Angels General Manager Billy Eppler announced Monday that Ohtani “has a grade 1-2 strain of the flexor pronator mass” — a collection of muscles and tendons in the forearm near the elbow. The right-hander reported discomfort in his arm Sunday after he issued five walks and got only five outs in a 50-pitch start against Houston. Ohtani is traveling with the Angels to Seattle, where they open a six-game road trip tonight. The Angels also use Ohtani as their primary designated hitter between his mound starts, and he is day-today as a hitter, the team said. The injury is the latest setback for the 26-year-old Ohtani, who left Japan in late 2017 with a determination to become the majors’ first regular two-way player in decades. He pitched in only 10 games during his AL Rookie of the Year campaign before requiring Tommy John surgery in late 2018, and he didn’t make it through the second inning in either of his starts after returning to the mound this season.

Cleveland Indians Manager Terry Francona is missing the team’s two-game series against the Reds because of a gastrointestinal issue that has bothered him for months. Francona was scheduled to be checked Monday by doctors at the Cleveland Clinic. He’ll remain in Cleveland during the Indians’ two-game series in Cincinnati that is set to be completed today. Team President Chris Antonetti said the team will “take it one step at a time,” and that it’s too early to know when the 61-year-old manager will return. The Indians return home Wednesday for two more games with the Reds before a three-game trip to Chicago to face the White Sox. Francona, who is in his eighth season with Cleveland, didn’t feel well before the team’s game Sunday at Minnesota. After doing his pregame media availability, he left the ballpark and returned to the team’s hotel. The Indians said he was suffering from the same issue that caused him to miss a couple of spring training games in Arizona in March. The team said Francona’s ailment is not related to covid-19.

Pons back to Tennessee

Forward Yves Pons has informed Tennessee he is returning for his senior season with the Volunteers rather than try his luck with the NBA Draft. “I’m back,” Pons announced Monday on Twitter. Pons was the SEC defensive player of the year after tying the Tennessee record with 73 blocked shots. The forward from Fuveau, France, averaged 10.8 points and 5.4 rebounds per game last season. He announced in April he would test his draft stock. Monday was the deadline for players to either return to college or remain in the NBA Draft that is now scheduled for Oct. 16.

Tour-level tennis resumed Monday in Palermo, Italy, after a five-month break, but players at the Palermo Ladies Open had to handle their own towels and not shake hands of opponents. The strict rules because of the coronavirus pandemic included no showers on site, and no autographs or photos with fans. Players in the singles main draw come from 16 European countries and Argentina. A limited number of fans were allowed into the 1,500-seat stadium court and had to follow social-distancing measures. They watched sixth-seeded Donna Vekic of Croatia beat Arantxa Rus of the Netherlands 6-1, 6-2 in windy conditions in the first official match — for men or women — since early March. “I’m definitely happy I didn’t forget how to play tennis, how to play matches, how to win,” Vekic said in a video conference. The U.S. Open is scheduled to begin Aug. 31, and the French Open is set for Sept.