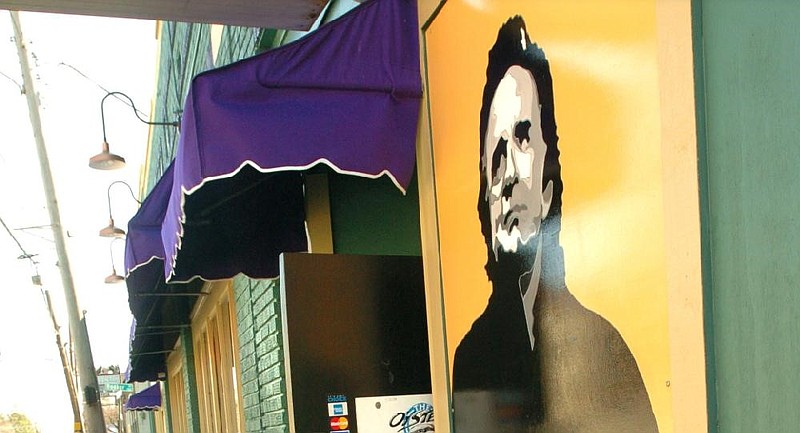 A painting of Johnny Cash is shown outside of the Oyster Bar on the 3000 block of Markham Street in Little Rock in this March 2004 file photo. ( Arkansas Democrat-Gazette / Steve Keesee)

Oyster Bar co-owner Chris Tanner says he’s planning to preserve a mural of Johnny Cash that has decorated the front of the restaurant at 3003 W. Markham St., Little Rock, since 2004.

“We’re looking to get a cool frame and hang it inside the restaurant,” Tanner said of the mural, which portrays the Arkansas native in the clouds. “There are lots of good spaces to hang it.”

Workmen had boarded up a portion of the building front after opening it up to create a new entranceway earlier this week.

The mural was painted by Little Rock artist Stephano. Other murals outside the restaurant include one by Kevin Kerby of a Tabasco sauce bottle, as well as Kevin Kresse's portrait of Mac, a neighborhood business owner, puffing on a cigar while holding his bulldog on a leash.

CORRECTION: A portion of the front of Little Rock's Oyster Bar has been boarded up after it was opened to create a new entranceway. An earlier version of this article incorrectly stated the reason for the boarded-up portion of the building.