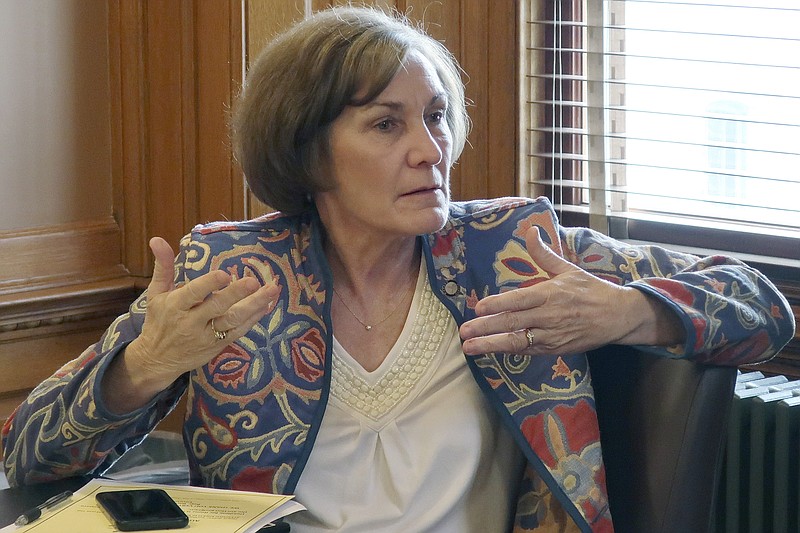 FILE - In this Feb. 13, 2019, file photo, state Sen. Barbara Bollier, D-Mission Hills, speaks during a meeting of Democratic senators at the Statehouse in Topeka, Kan. Bollier, a Kansas legislator, is running for the U.S. Senate in the Tuesday, Aug. 4, 2020 primary. (AP Photo/John Hanna File)

TOPEKA, Kan. -- Kansas Republicans on Tuesday nominated Rep. Roger Marshall for the Senate instead of conservative Kris Kobach, heeding the party establishment's advice for keeping a normally safe seat out of play.

Marshall prevailed in a crowded GOP primary field with the backing of major farm, business and anti-abortion groups but without an endorsement from President Donald Trump sought by Senate Majority Mitch McConnell and others for the two-term congressman for western and central Kansas. Marshall overcame Kobach's reputation as both an informal adviser to Trump and reputation as a conservative firebrand.

Many Republicans' fears about Kobach fueled ad campaigns that cost at least $15 million, with most of the spending by political action committees. Kobach, the former Kansas secretary of state, is nationally known for advocating restrictive immigration policies and alienated independent and moderate GOP voters in losing the Kansas governor's race in 2018.

The race for retiring four-term Republican Sen. Pat Roberts' seat had national implications even though the GOP hasn't lost a Senate contest in Kansas since 1932. Republicans are trying to keep their 53-47 Senate majority with competitive races in other states, including Arizona, Colorado and Maine.

Many Republicans were nervous about the Senate race because the Democratic nominee, state Sen. Barbara Bollier, has raised more than $8.2 million for her campaign, seeing a flood of contributions from outside Kansas. Bollier is a retired Kansas City-area anesthesiologist and former moderate Republican who switched parties in 2018.

Marshall raised about $2.9 million and Kobach, a little more than $1 million. Bob Hamilton, the founder of a Kansas City-area plumbing company largely self-funded a campaign heavy on television ads with $3.5 million in personal loans. Those figures were all dwarfed by PAC spending in the primary, which totaled about $11 million.

Roberts declared his support for Marshall after the congressman had picked up endorsements from the U.S Chamber of Commerce, the Kansas Farm Bureau, the National Right to Life Committee and Kansans for Life, the state's most influential anti-abortion group.

Kansas is one of five states that held primary elections Tuesday, with Democratic voters in Michigan and Missouri refereeing the latest disputes between the younger, far-left activists pushing for a more ideologically aggressive Congress as opposed to an older, more establishment-friendly liberal base. Voters in Arizona and Washington state also cast ballots.

Information for this article was contributed by John Hanna of The Associated Press; and by Paul Kane of The Washington Post. 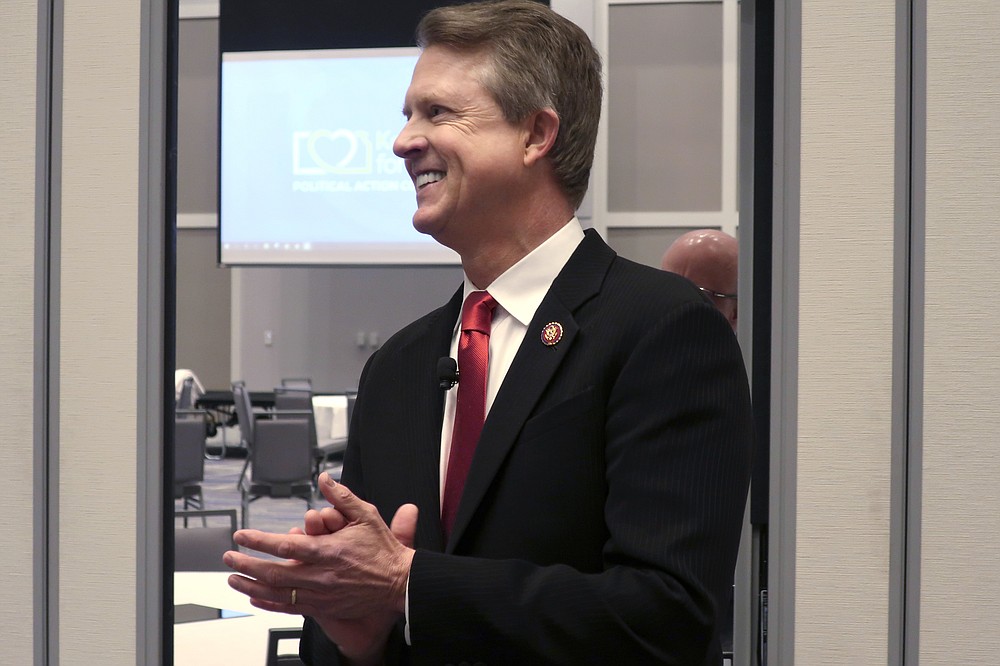 FILE - In this Feb. 1, 2020 file photo, U.S. Rep. Roger Marshall, R-Kan., a candidate for the U.S. Senate, awaits the start of a debate in Olathe, Kansas,Establishment Republicans worried heading into Kansas’ primary Tuesday, Aug. 4, 2020 for an open Senate that weeks of effort to thwart polarizing conservative Kris Kobach would falter because they couldn’t persuade President Donald Trump to endorse their favored candidate. (AP Photo/John Hanna, File) 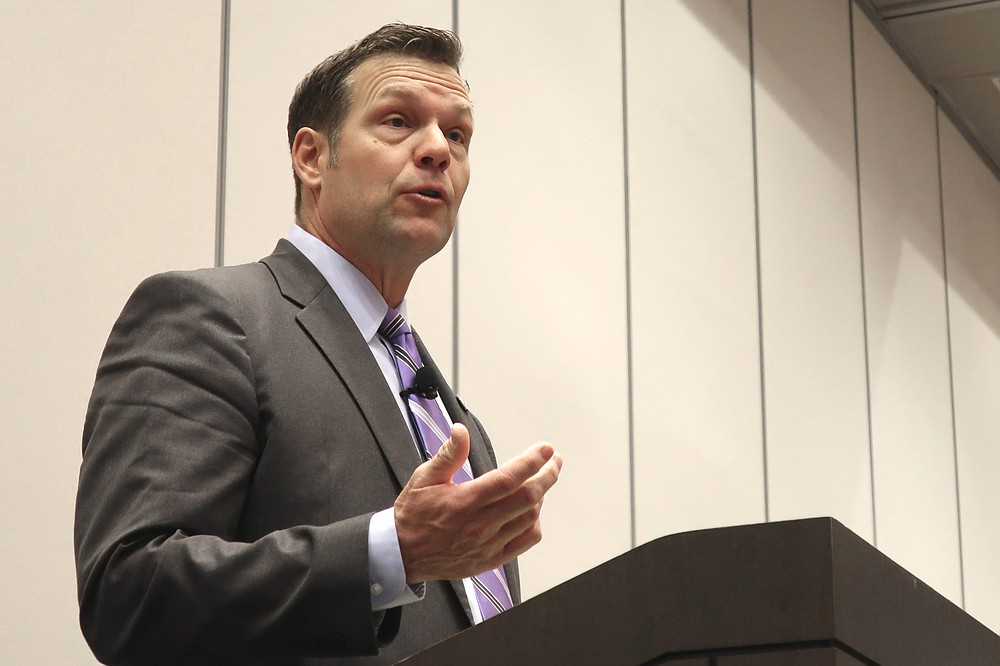 FILE - In this Feb. 1, 2020 file photo, former Kansas Secretary of State Kris Kobach, a candidate for the U.S. Senate, answers a question during a debate in Olathe, Kan. Establishment Republicans worried heading into Kansas’ primary Tuesday, Aug. 4, 2020, for an open Senate that weeks of effort to thwart polarizing conservative Kobach would falter because they couldn’t persuade President Donald Trump to endorse their favored candidate. Trump didn’t intervene to help Rep. Roger Marshall in a crowded field, despite prodding from Senate Majority Leader Mitch McConnell and others. (AP Photo/John Hanna, File) 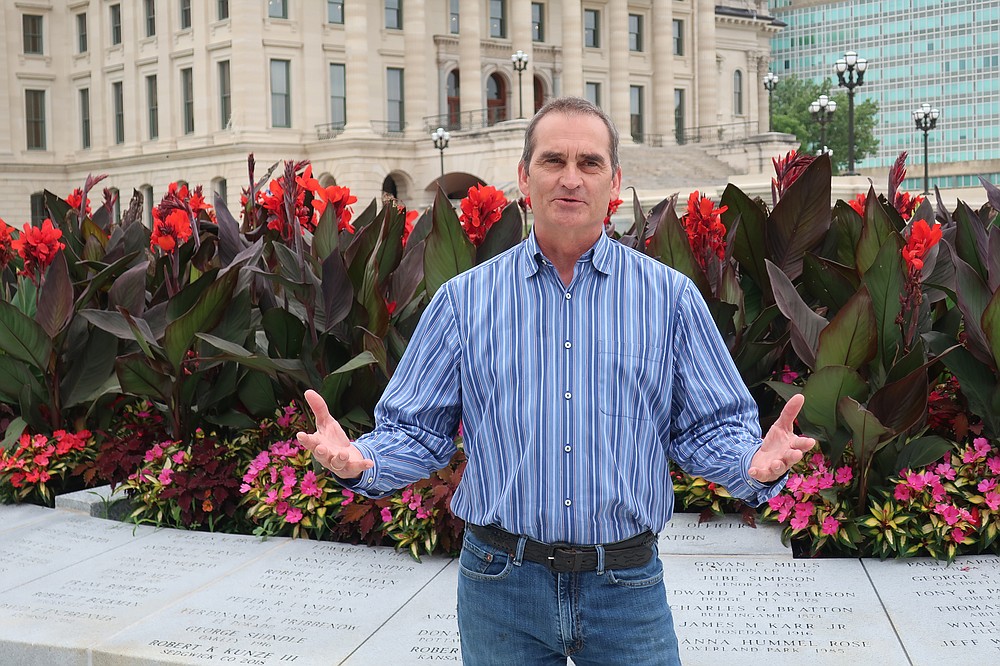 FILE - In this July 1, 2020 file photo, Bob Hamilton, a Republican candidate for an open U.S. Senate seat in Kansas, discusses his campaign while standing in front of the state's Law Enforcement Memorial outside the Kansas Statehouse Topeka, Kan. The Kansas primary is Tuesday, Aug. 4, 2020. (AP Photo/John Hanna File)
ADVERTISEMENT