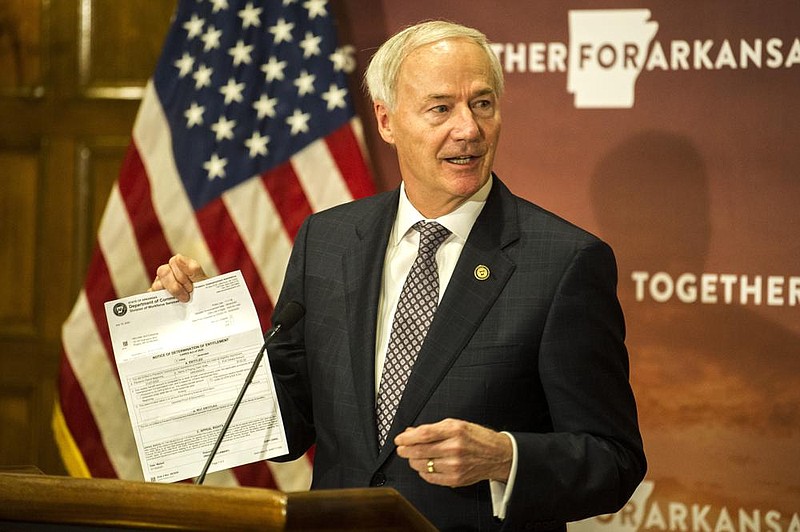 Despite warnings from top federal public health officials, Gov. Asa Hutchinson on Tuesday stuck by his goal of having schools across the state reopen to in-classroom instruction later this month.

At his daily news conference on the pandemic, the Republican governor noted that he delayed the start of the school year from Aug. 13 to the week of Aug. 24.

The extra time will allow Arkansas to learn from states that start earlier, as well as "from experiences that we see in the sports world," Hutchinson said.

"It gives us an opportunity to better prepare in every respect," Hutchinson said. "So we're going to utilize this time effectively over the next three weeks, because we want everybody to be able to go back to in-classroom instruction in a safe way that best protects the students, gives them an opportunity to learn, as well as the teachers and the staff.

"That's our objective, and we're working on that, as I said, every day."

Hutchinson spoke as the state's cumulative count of coronavirus cases increased by 784, to 45,381. Of those, 6,891 are considered active.

The state's death toll from the pandemic, as tracked by the Arkansas Department of Health, increased by 15, to 490.

[Video not showing up above? Click here to watch » https://www.youtube.com/watch?v=zF34rLecqeo]

After dipping on Monday, the number of patients hospitalized with covid-19 rose by 13 to reach a new record, 526.

The number of patients who were on ventilators dropped by seven, to 101.

Meanwhile, a report from the White House coronavirus task force, dated Sunday, listed Arkansas as having 37 counties that are in the "red zone" based on their number of new cases last week and the percentage of tests that were positive.

That was up from 32 counties with the label the previous week.

The report, for at least the past two weeks, has also listed the state as a whole as being in the "red zone" based on its growth in new cases and percentage of tests that were positive.

Twenty other states were also listed as being in the red zone as of July 26, according to a report by The New York Times.

"If you have high caseload and active community spread, just like we are asking people not to go to bars, not to have household parties, not to create large spreading events, we are asking people to distance learn at this moment, so we can get this epidemic under control," Deborah Birx, the White House task force's coordinator, said on CNN's State of the Union on Sunday.

President Donald Trump last month said schools in cities or states that are "hot spots" for new coronavirus cases "may need to delay reopening for a few weeks."

Robert Redfield, director of the U.S. Centers for Disease Control and Prevention, told reporters the next day that he would consider a "hot spot" an area where the percentage of tests that are positive exceeds 5%.

But Trump had a simpler message Monday, tweeting in all-capital letters: "Open the Schools!!!"

"Everybody's got a different opinion on schools," Hutchinson said Tuesday. "What they are united about is that these are local decisions that have to be made based upon the circumstances in your state, and that's what we're acting on."

Many school districts in Arkansas are planning to offer all-online options for students, but Hutchinson has said he expects them to also offer a traditional, in-classroom option, with the option to shift to online instruction as needed.

The Arkansas chapter of the American Academy of Pediatrics said last month that the state should open classrooms only in counties that meet the White House guidelines for states on moving from one phase of reopening to the next.

Those call for a "downward trajectory" of cases or the percentage of tests that are positive over a two-week period.

The Arkansas Education Association also called Tuesday for the state to suspend "high-stakes, standardized testing" during the coming school year, as well as a teacher evaluation system and Arkansas history professional development requirement.

"As we prioritize the health and safety of students, educators and the broader school community, it would be detrimental to shift our focus and our resources away from achieving this goal," the teachers union's president, Carol Fleming, and executive director, Tracey-Ann Nelson, said in a letter to Education Secretary Johnny Key.

Kimberly Mundell, a spokeswoman for the state Department of Education's Division of Elementary and Secondary Education, said suspending the standardized tests could result in the state losing federal funds.

"While federal requirements for standardized testing were waived during the spring of 2020 due to the coronavirus pandemic forcing school closures during the annual testing season, a waiver of statewide summative assessments at this time would remove an essential metric for parents, schools, districts, and the public to determine the performance and progress of students in Arkansas public schools," she said in an email.

She said suspending the teacher evaluation program, meanwhile, "would have devastating effects on educators' professional growth and development."

She noted that the program, known as the Teacher Excellence and Support System, requires schools to help teachers meet goals set by the educators with their principals, and to mentor new teachers and administrators for up to three years.

"Additionally, TESS includes formative observations to help develop teaching skills, which will be more important than ever as teachers implement new teaching approaches that will include technology-driven approaches to teaching and learning," Mundell said.

At his news conference, Hutchinson also said he received a notice over the weekend that he had been approved for benefits under the federal Pandemic Unemployment Assistance program for independent contractors and self-employed people.

"Now you wonder how that can happen," he said.

"First of all, I did not apply for it. Secondly, I'm not entitled to it, and the scheme is most likely that if I would go ahead and sign off on this, then the check would be issued but not to my bank account but to the fraudster's bank account."

Commerce Secretary Mike Preston said fraudulent claims for benefits had also been filed under the names of several state Cabinet secretaries as part of an apparent "national, even international ring trying to defraud the system."

He said the state is setting up stations around the state to verify claimants' identities.

People whose benefits were frozen are being sent letters instructing them to go to one of the stations to verify their identities so that benefits can resume, he said.

People who receive letters notifying them about benefits they didn't apply for should file a police report and report the fraud by visiting the state Commerce Department's Division of Workforce Services' website at dws.arkansas.gov or by emailing adws.internalaudit@arkansas gov.

At the federal courthouse in Little Rock, judges canceled most criminal proceedings scheduled for this week after they learned that the U.S. Marshals Service, which transports prisoners, is short-staffed while several deputy marshals await covid-19 test results.

McCormack said the inmates wore masks and weren't in close contact with anyone in the courtroom, but because the marshals work closely with prisoners, they underwent testing Sunday and Monday. He said results are expected quickly, possibly by Tuesday afternoon. He said all criminal proceedings have been shut down temporarily except for those required to proceed under the Bail Reform Act.

The most recent White House report defined a state as being in the red zone for cases if it had more than 100 new cases per 100,000 residents during a seven-day period ending Friday.

The report also classified states as being in the red zone "positivity" if more than 10% of its tests during the week were positive.

Counties were listed as being in the red zone if they met both criteria.

The report also listed 10.3% of the state's nursing homes as having at least one covid-19 case among residents, up from 8.8% a week earlier.

But the report said an average of only 70% of hospitals reported the information each day, so "this may be an underestimate of the actual total number of COVID-related hospitalizations."

In red zone counties, the report continued advocating for steps such as closing bars and gyms, and limiting social gatherings to 10 people or fewer.

Washington, Sebastian and Craighead counties topped Arkansas' list of red zone counties based on their rate of new infections.

Meanwhile, 17 counties -- including Pulaski, Benton and Faulkner -- were listed as being in the "yellow zone," meaning they didn't meet the red zone criteria but had at least 10 new cases per 100,000 residents and that at least 5% of the tests in the county were positive.

By the end of next week, projections from the University of Arkansas for Medical Sciences' Fay W. Boozman College of Public Health show an increase among the state's nonincarcerated population of 81 deaths because of the virus, with the case tally among non-inmates rising to a total of 52,408 since the pandemic began March 11.

"Case reports during the last week in July suggest growth in cases may be leveling off," researchers wrote in a forecast report dated Thursday and released Tuesday.

"Specifically, over the past week, we have seen roughly the same number of new cases reported each day. This would suggest the curve may be leveling off, albeit at a very high rate of daily new infections."

They added, however that "recent data are not particularly good indicators of long, or even short-term trends."

"If we are to gain some type of control over case growth and effectively 'flatten the curve,' it may well have to be now," the researchers wrote.

Unlike previous reports, the latest one did not include longer-range projections for cases and hospitalizations.

"There have been a number of changes in our understanding of covid-19 due to recent reports in the peer-reviewed press, and we believe it is time to reassess the assumptions under which the model has been operating," the researchers wrote.

"For example, at least one study is reporting there may be as many as 10 to 20 times the number of asymptomatic cases as previously thought. Another study has found the concentration of virus in the upper-respiratory tracts of children is much higher than in adults. This suggests children may be more infectious than previously thought."

In a video accompanying the report's release, UAMS Chancellor Cam Patterson said the researchers would also be "recalibrating our models given new data and how the mask mandate by Gov. Asa Hutchinson appears to positively be affecting the trend of new cases."

The researchers said in the report that they would update their model and expect to have new longer-term projections in the next report, in two weeks.

The number of active infections in the state, including among asymptomatic people with undetected infections, was predicted to reach 103,651.

Arkansas' latest cases included 149 in Pulaski County, 56 in Sebastian County, 55 in Mississippi County, 45 in Washington County, 35 in Benton County, 25 in Saline County, 24 in Crittenden County and 23 in Jefferson County.

Among inmates in prisons and jails, the state's count of cases rose by 10. Such increases can reflect new cases as well as ones that were reported earlier but not immediately classified as coming from a jail or prison.

Statewide, the number of cases that were considered active increased by nine, to 6,891 as 760 Arkansans were newly classified as having recovered.

At the Ouachita River Unit in Malvern, the number of inmates who have died increased this week to 13 after the death of an inmate Sunday, the state Department of Corrections said.

The inmate, who was in his late 60s and serving time for sexual assault, died at Saline Memorial Hospital in Benton.

Meanwhile, a report from the Saline County coroner's office identified an inmate from the prison who died of the virus at the hospital on July 29 as 69-year-old Maurice Jones.

Jones was sentenced in Pulaski County to life in prison for kidnapping in 1980, Corrections Department spokesman Cindy Murphy said.