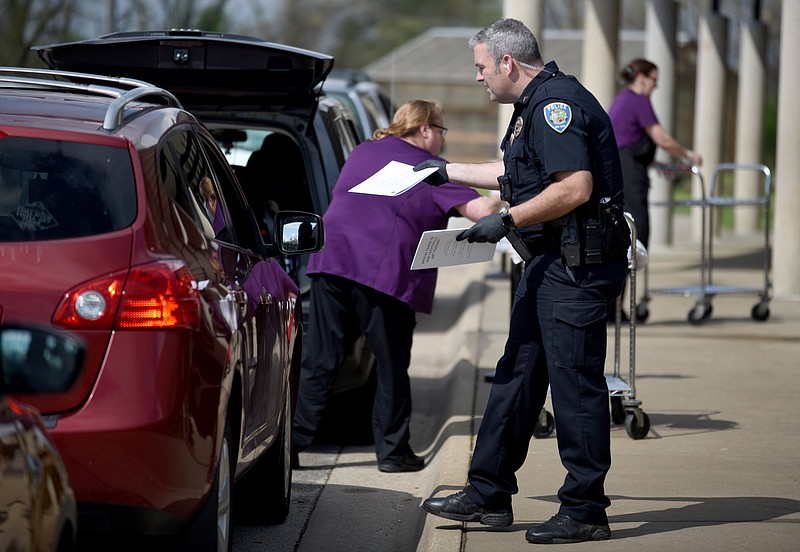 FAYETTEVILLE -- A council member changed her vote after a robust discussion Tuesday over whether to hire two new school resource officers, and the measure failed.

Mayor Lioneld Jordan originally cast a deciding vote to hire the two new officers, but with the condition they be licensed in social work, behavioral therapy or a similar field.

On the first vote, the council split 4-4 to accept a grant shared between the School District and city to create two positions for officers in schools. Jordan broke the tie, voting in favor.

Council Member Sarah Marsh rescinded her vote, changing it from a yes to a no. The measure to accept the grant and hire the officers failed 5-3.

Council members supported applying for the grant in March, before the May 25 death of George Floyd while in custody of Minneapolis police. Floyd's death sparked protests nationwide against police brutality and reform in approaches to public safety.

Seven officers are assigned to schools in the city, and they carry out duties elsewhere while school is out of session, such as trail patrol, community events and the citizens academy. The Community Oriented Police Services hiring program grant will cover $250,000 of the $562,710 cost to have two new officers assigned to schools for four years. The city and School District will cover the rest of the cost.

Council Member Matthew Petty had proposed a change to require the officers hired to also be licensed in social work, therapy or similar field. He added the condition as long as the requirement is allowed under state law and a good faith effort is made to find such candidates.

Four residents spoke at Tuesday's meeting, held online via Zoom, against hiring more police officers to put in schools. Consensus was counselors or other similar professionals are better suited to handle trauma children experience at home, and minority populations often have a different experience interacting with police than do white students.

Petty said the intention was to add the requirement in the job description, and if no applicants were found, two new officers would still be hired. He ultimately voted against the measure after hearing from Fields and Williams, and other council members said it didn't go far enough.

Sloan Scroggin, a council member who voted against, said he had concerns about putting more armed officers in schools, and he expressed that feeling when the grant application came up in March.

Council Member Sarah Bunch, who voted in favor, said a lot has changed with public sentiment since March, but the council told the department to apply for the grant. The deadline to accept the money is Sunday.

Mark Kinion, council member, said he felt the change with the added hiring requirement represented a compromise. The School District asked for the officers, and the measure the council passed sends a message to set a precedent for future expectations, he said.

In other business, the council split 4-4 on lowering the requirements to own miniature goats. Jordan declined to vote, meaning the measure failed.

Current code says a resident must have at least 10,000 square feet of lot space to own at least two goats. The change would have reduced the requirement to 4,000 square feet.

Petty sponsored the measure after two residents in the Washington-Willow neighborhood were told their lot was not large enough to own goats.

• Rezoning a 1.44-acre lot south of West Deane Street, west of Garland Avenue, to allow residential single-family development up to eight units an acre. The original zoning was four units per acre.