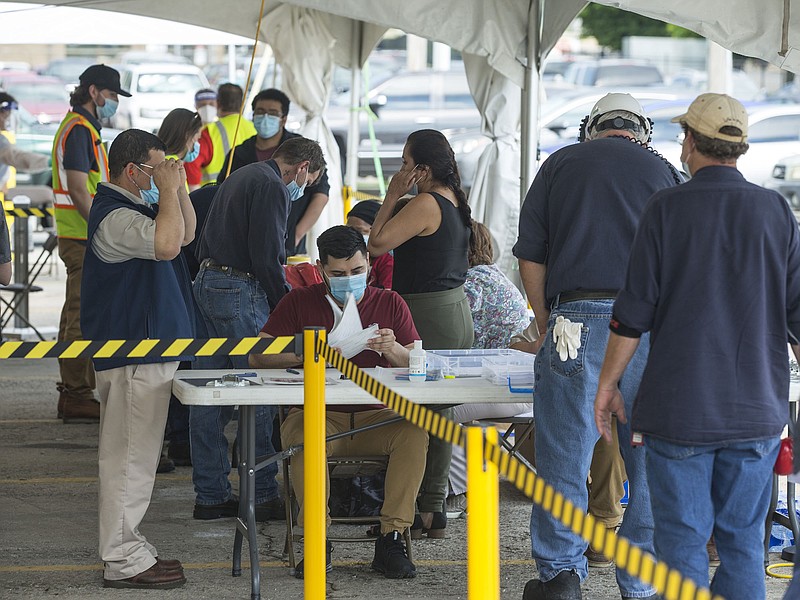 An advocate for the state's poultry industry workers posted a video on social media this week to share complaints about the deaths of workers who were employed at a Tyson Foods chicken plant in Van Buren.

Magaly Licolli, one of the founders of the advocacy group Venceremos in Springdale, identified plant employees who died from covid-19 infections. She said Arkansas poultry workers are contracting the virus and dying because they are not adequately protected by their employers.

Seven workers at the Van Buren plant have died, Licolli said Wednesday, naming five of them.

On a Facebook Live video this week, Licolli stood in front of the Van Buren chicken plant and identified Salvador Zamorano Andres, Martin Cardenas and Jesus Lovato Molina, of Sebastian County and Khammy Nothongkham and Viengsong Phanphengdee, of Crawford County as the workers who died after contracting the virus.

Their covid-19 related deaths were confirmed Wednesday by county coroners.

"We are saddened by the loss of any Tyson team member," Tyson spokesman Worth Sparkman said in response to the deaths.

As U.S. meatpacking workers began testing positive for covid-19 in the spring, employers installed workstation dividers and began making temperature checks and other safety measures to protect workers and to keep their plants running. Some companies are offering bonuses to workers for attendance.

Health clinics at Tyson facilities have been set up to test workers with symptoms and workers in close contact with those who tested positive. Tyson said it plans to test thousands of workers each week under a new strategy that randomly picks workers regardless of symptoms.

"Our top priority is the health and safety of all our team members," Sparkman said. One of the mobile clinics is at the Van Buren plant, he said.

Licolli has been critical of Tyson's efforts, leading protests at processing plants and slaughterhouses as workers became infected with covid-19. Venceremos and the environmental group Food and Water Watch filed a complaint last week that urged the Federal Trade Commission to investigate Tyson for false labor claims.

If workers are sick and do not show symptoms, Licolli said they are required to work. If they want to quarantine, she said they have to file for disability, which can be difficult because of language barriers.

Hispanic migrants account for roughly 44% of workers in U.S. meat and poultry plants and 25% are Black, according to the Center for Economic and Policy Research, a think-tank. More than half are born outside of the country and many live at or below poverty level.

Tyson has said employees are encouraged to take time off to quarantine. Front line meatpacking workers now have easier access to disability benefits, among other changes the company has made. Tyson reinstated its regular attendance policy in June after relaxing it in the initial months of the pandemic.

As of Monday, the health department reported a total of 23 coronavirus deaths of workers with ties to the poultry industry. Asked for specific information about each outbreak, spokeswoman Danyelle McNeill said details would raise privacy issues and make it possible to identify individuals.

U.S. meat companies have started to ask judges to dismiss lawsuits claiming they are liable for the deaths of workers who tested positive for covid-19. They argue that without proof there is no way to tell where the workers contracted the virus or if the virus was the cause of death.

Their operations are also designated "critical infrastructure" under an executive order signed to keep plants open after workers started getting sick and missing shifts. Defense attorneys are citing this as a reason to dismiss complaints brought by the families of infected workers who died.

Licolli has criticized the state Health Department for not releasing worker death data by location.

"We deserve to know," she said in a video.

Licolli said in an interview that there were other deaths linked to George's and Cargill poultry plants in Northwest Arkansas.

"This needs to be investigated because this needs to stop," she said. "They cannot continue sacrificing workers for the sake of profits."