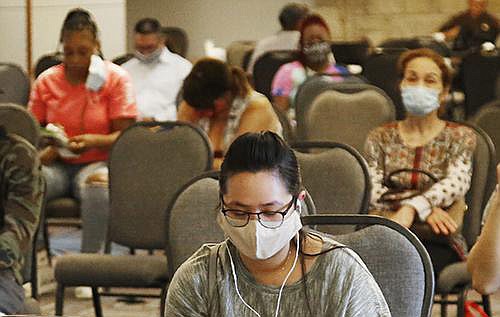 People wait to discuss unemployment claims at a state office in Midwest City, Okla., in July. A report by payroll processor ADP on hiring in July is just one indicator of the impact the coronavirus is having on the economy. (AP/Sue Ogrocki)

U.S. businesses appeared to slow their hiring dramatically in July, according to a survey, adding only 167,000 new workers to their private payrolls -- a steep drop from analysts' expectations.

The numbers reported Wednesday by payroll processor ADP were far below June's gain of 4.3 million and May's increase of 3.3 million. According to ADP, July's limited hiring means the economy still has 13 million fewer jobs than it did in February, before the viral outbreak intensified. June's payroll numbers were revised from a previously estimated 2.4 million.

ADP's report was a significant departure from the more than 1 million jobs that some economists had predicted, suggesting virtually no sector of the U.S. economy has been untouched by the apparent slowdown.

"The labor market recovery slowed in the month of July," Ahu Yildirmaz, vice president and co-director of the ADP Research Institute, said in a statement. "We have seen the slowdown impact businesses across all sizes and sectors."

Economists cautioned that the new hiring data may offer an incomplete picture of the nation's labor market. The Trump administration is set to release more robust employment data Friday, which does not always mirror ADP's figures. The initial ADP figures for May and June were significantly below the Labor Department's official tallies.

The government's jobs report is forecast to show that private payrolls increased by 1.5 million.

Still, ADP's findings reflect a growing belief that recent economic improvements were tempered as the country's coronavirus outbreak gained new momentum in June and July. On Tuesday, the Federal Reserve Bank of St. Louis sounded the same alarms, pointing to new data showing that the "recent recovery in employment has halted" as a result of the nationwide spike in infections.

President Donald Trump on Tuesday suggested that some parts of the economy are snapping back quickly, such as the housing market, and he has also touted the stock market's robust performance in recent months. Still, 20 million to 30 million Americans remain unemployed, and if companies halt rehiring, it could mean the recovery takes much longer than envisioned a few weeks ago.

The dour news arrived as Democrats and Republicans in Congress continue to wrangle over the size and scope of the next coronavirus relief package. Lingering disagreements over the future of federal unemployment payments and relief to cash-strapped workers, renters, businesses and local governments have threatened to push negotiations into next week, lawmakers have said.

"I am hoping this will light a fire under Congress," said Martha Gimbel, senior manager of economic research at Schmidt Futures. "I think there was plenty of data before this that things were really bad, and it is frustrating for me it will take catastrophic economic numbers to move Congress."

Nearly all of the job gains in July came in service-providing sectors, ADP reported, including education, health, leisure and hospitality as some states relaxed restrictions in the weeks before coronavirus infections once again began to climb. Construction jobs, meanwhile, fell by 8,000.

There are other signs the coronavirus surge in July has dealt a setback to the economy and job market. The number of people applying for unemployment benefits has increased for the past two weeks, after falling steadily for three months. And credit and debit card data indicates that consumer spending leveled off last month.

Small businesses with fewer than 500 workers employ about 58 million people, almost half the private workforce, ADP data shows. The government's Paycheck Protection Program at some point supported businesses representing most of them, according to the Small Business Administration, which runs the loan program.

But "hundreds of thousands" more jobs remain on the edge in the next few months without a deal from Congress, said Mark Zandi, chief economist at Moody's Analytics.

One-fifth of small companies are planning to dismiss workers or have already done so after using up the federal loan program, and nearly half of firms said they will need additional aid over the next year, according to a National Federation of Independent Business survey. And a poll led by Cornell University showed that about one in four workers hired back thanks to the loan program were told by their employers that they may be fired again.

The management consultant said the funds helped ensure her 15 workers remained paid -- even as some of her clients, which included colleges and natural resource companies, scaled back or canceled projects. Many of these firms ran out of Paycheck Protection Program funds themselves, never applied because they feared being on the hook for repayment, or didn't have the banking relationships to secure funding.

The problem is that the coronavirus continues to play havoc with the economy and revenue streams as states dial back reopenings.

"If our business isn't back to a consistent level that it was at before, or we can't reduce any more of our expenses, then you're left with people," Slaughter said. "If there isn't another round of stimulus, we'll start cutting past the fat and to the bone. And that's our people. And our people are hard to replace."

Information for this article was contributed by Tony Romm of The Washington Post; by Christopher Rugaber of The Associated Press; and by Maeve Sheehey, Katia Dmitrieva and Olga Kharif of Bloomberg News.