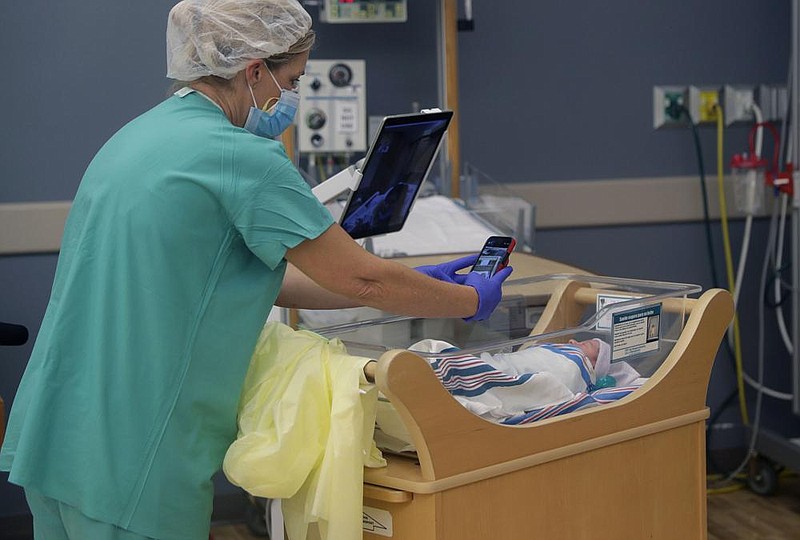 Nurse Amanda Vaughan takes photos in the maternity ward at the DHR Health hospital in McAllen, Texas, and helps new mother Clarissa Munoz, who is infected with covid-19, see her baby on an iPad. Munoz was separated from her child after giving birth. (AP/Eric Gay)

RIO GRANDE CITY, Texas -- For nearly a month on America's southern doorstep, the Rio Grande Valley, a borderland of 2 million people in south Texas, pleaded for a field hospital. But not until Tuesday was one ready and accepting patients.

In July alone, Hidalgo County reported more than 600 deaths -- more than the Houston area, which is five times larger.

At DHR Health, one of the largest hospitals on the border, nearly 200 of the 500 beds hold coronavirus patients isolated in two units. A third unit is in the works. That doesn't include the covid-19 maternity ward, where mothers and newborns are separated immediately.

When labor pains signaled that Clarissa Munoz was at last going to be a mother, she jumped in a car and headed two hours down the Texas border into one of the nation's coronavirus hot spots.

[Video not showing up above? Click here to watch » https://www.youtube.com/watch?v=Zi6z5AeHnh8]

She went first to a hospital so desperate for help that nurses recently made 49 phone calls to find a bed 700 miles away to airlift a dying man with the virus. From there, she was taken to a bigger hospital by ambulance. Along the way, she passed a funeral home that typically handles 10 services a month but is up to nine a week. And when she finally arrived to give birth, she was blindsided by another complication: A test revealed that she too was infected.

Hours later, Munoz was granted just a few seconds to lay eyes, but no hands, on her child, who was whisked away.

Doctors and nurses rushed Munoz's baby out of the delivery room and down a hallway sealed by a zippered tarp to protect from contaminated air. Seven hours later, she still did not know his weight.

Across the street, alarms blared constantly in a coronavirus intensive-care unit, summoning nurses to roll patients onto their stomachs to force more air into their lungs.

"It's a really, really ugly feeling," Munoz said of watching her son being taken away.

Texas reopened quicker than most of the U.S., only to backtrack in the face of new outbreaks. Health officials say the worst of a summer resurgence appears to be behind the state as a whole, but the border is an exception. Doctors fear another wave is around the corner.

This predominantly Hispanic region is vulnerable to covid-19. The prevalence of diabetes there is roughly three times the national average, and households have among the lowest incomes in America, adding to the difficulty of thwarting the virus.

Even the weather has added to the burden. The first hurricane of the season barreled over the border two weeks ago. At first, local officials hoped that the storm named Hanna would wash out family gatherings and bar crawls, slowing the spread. In reality, the system knocked out power to thousands of homes for days, driving families into closer contact with relatives whose lights remained on.

At the hospital, a television monitor displays the struggle in real time: Teal rectangles represent occupied hospital beds, and green rectangles are open beds. The grid is nearly all teal. On a whiteboard, "body bags" is scrawled on a list of needed items.

A Christian relief charity that opened a coronavirus field hospital in New York's Central Park visited the border in mid-July with an eye toward building another facility. That never panned out, and neither did another idea to send patients to hotels. Last week, Republican Gov. Greg Abbott announced that a Hidalgo County convention center would become a hospital.

"We need the help. Our house is on fire," Rio Grande City Mayor Joel Villarreal said. "We are no less American than other people in other parts of the country."

Martha Torres, a nurse at Starr County Memorial Hospital, knows about searching in vain for help. She has spent entire shifts calling other intensive care units in Texas to accept helicopter transfers out of her 29-bed unit. Some patients are sent as far away as Oklahoma City, and few survive after the long flight -- leaving families with the burden of getting the bodies back home.

One entrance to the hospital's covid-19 ward resembles an off-the-shelf patio door, the kind sold at big-box hardware stores. Last week, Alex Garcia, 26, visited his father by peering through the outside window of his room. Both men are pipeline workers.

That same night, Emily Lopez was preparing for her mother's funeral only weeks after her aunt died of the virus. The two had been playing bingo together before becoming ill, and two other family members were also hospitalized. "In this area, it's not a joke. It's life or death," she said.

The covid-19 maternity ward at DHR Health is a place of relative calm but with its own problems. Among them is the challenge of squaring best practices with the realities of south Texas, including guidelines that recommend the mother stay isolated at home and the baby be placed in the hands of another caregiver.

"This is great in Hartford, Conn., because everybody has a 4,000-square-foot home, the average income is $180,000 and all that. Down here, it's very different," said Dr. Efraim Vela, the hospital's chief executive physician of women's health. "We're having problems with that."

Nearly 15,000 pregnant women in the U.S. have tested positive for the coronavirus, and at least 35 have died, according to the Centers for Disease Control and Prevention. Although it is possible for a pregnant woman to spread the coronavirus to her fetus, it seems to be relatively rare.

Munoz, 25, didn't know she had the virus when she left her home in the border town of Falcon last week for her son's birth. While she went into labor alone, her husband sat all night in the parking lot, barred from going inside.

First thing in the morning, he plunked down $100 for a rapid covid test at a clinic that told him he needed an appointment.

"I told them it was an emergency. They weren't going to let me get my son out of the hospital unless I was negative," said her husband, Nicolas Garcia.

After the birth, her son was a phone app away: The hospital lets covid-positive mothers call the nursery over a video chat. Nurse Ashley Vaughan makes a point to position the camera so mothers can see hands and toes on the call. "This mom will stay on the video chat until the mom falls asleep," Vaughan said, pointing to another bassinet.

She went back to the other baby. "He's doing good, right?" Munoz asked through the video. Vaughan assured the new mother that he was fine, and the conversation shifted to when the family might go home.

"Are you done? Or do you want to stay on?" Vaughan asked.

Munoz said she would go for now. She took a last look before hanging up.

Information for this article was contributed by John L. Mone of The Associated Press. 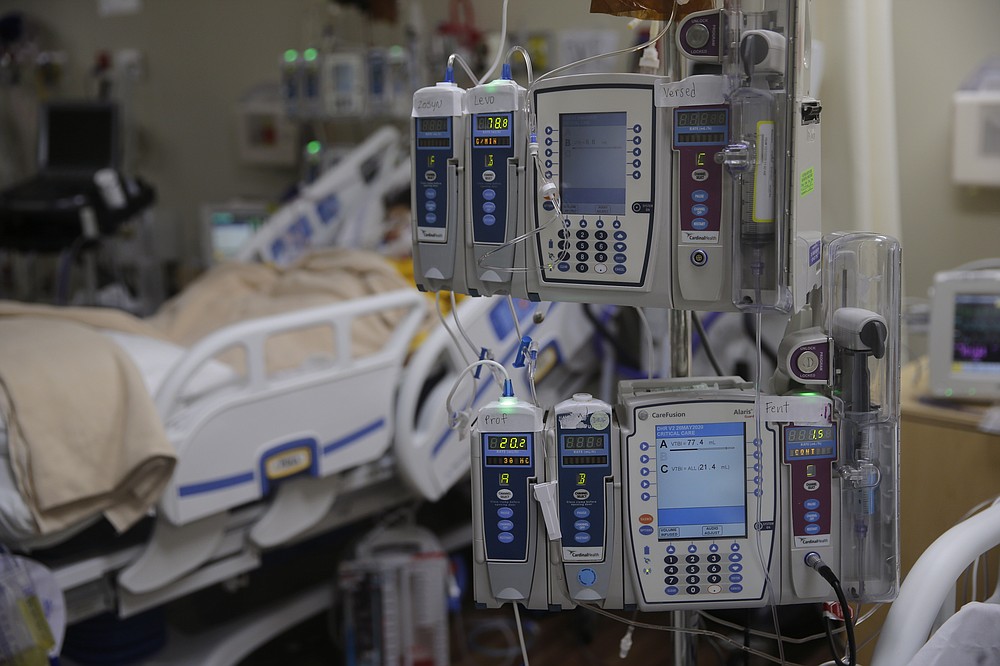 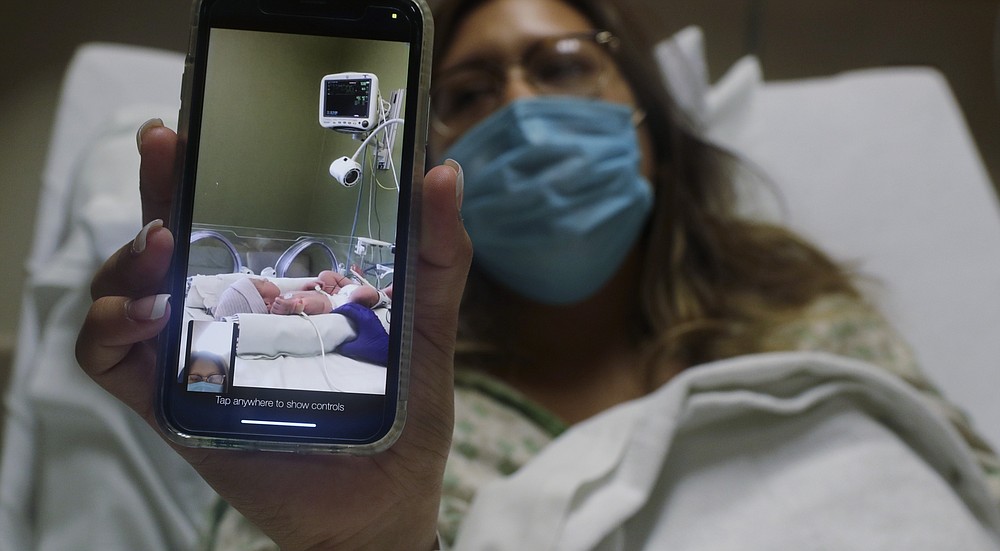 Clarissa Munoz, who is infected with COVID-19, shares a photo of her baby at DHR Health, Wednesday, July 29, 2020, in McAllen, Texas. Munoz was separated from her child after giving birth. (AP Photo/Eric Gay) 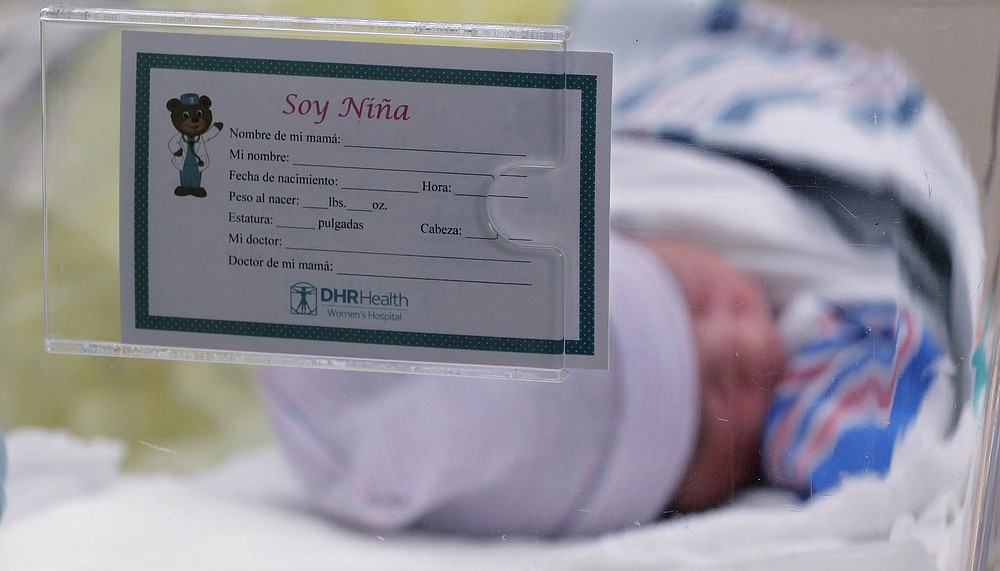 CORRECTS TO 35 WHO HAVE DIED, INSTEAD OF 430 - A baby born to a mom with COVID-19 rests at DHR Health, Wednesday, July 29, 2020, in McAllen, Texas. Nearly 15,000 pregnant women in the U.S. have tested positive for the coronavirus, and at least 35 have died, according to the Centers for Disease Control. (AP Photo/Eric Gay) 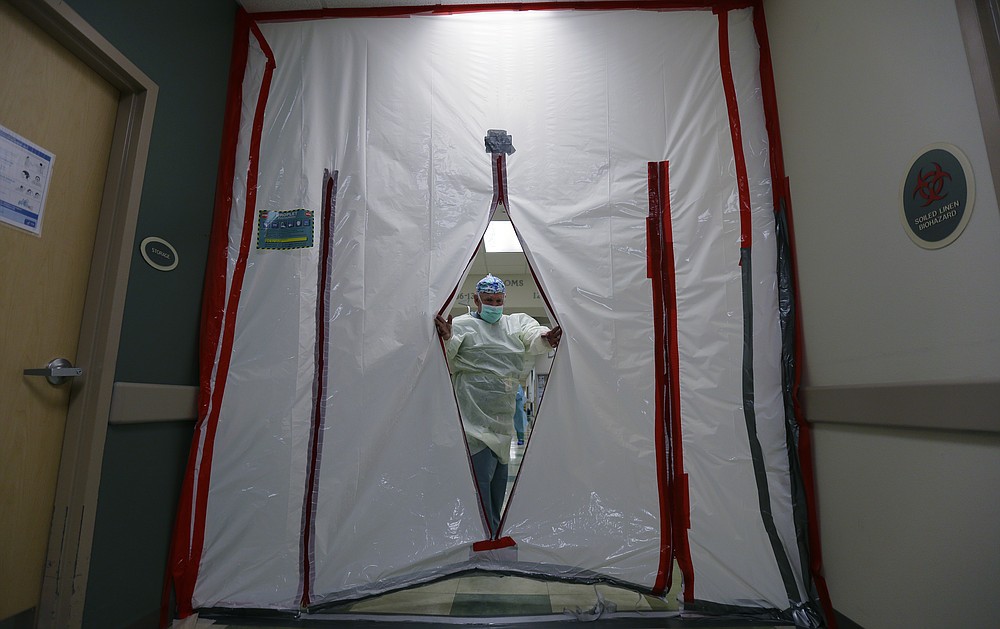 CORRECTS TO 35 HAVE DIED, INSTEAD OF 430 - Dr. Efraim Vela slips through a makeshift door to an area for pregnant women and new moms with COVID-19 at DHR Health, Wednesday, July 29, 2020, in McAllen, Texas. Nearly 15,000 pregnant women in the U.S. have tested positive for the coronavirus, and at least 35 have died, according to the Centers for Disease Control. (AP Photo/Eric Gay) 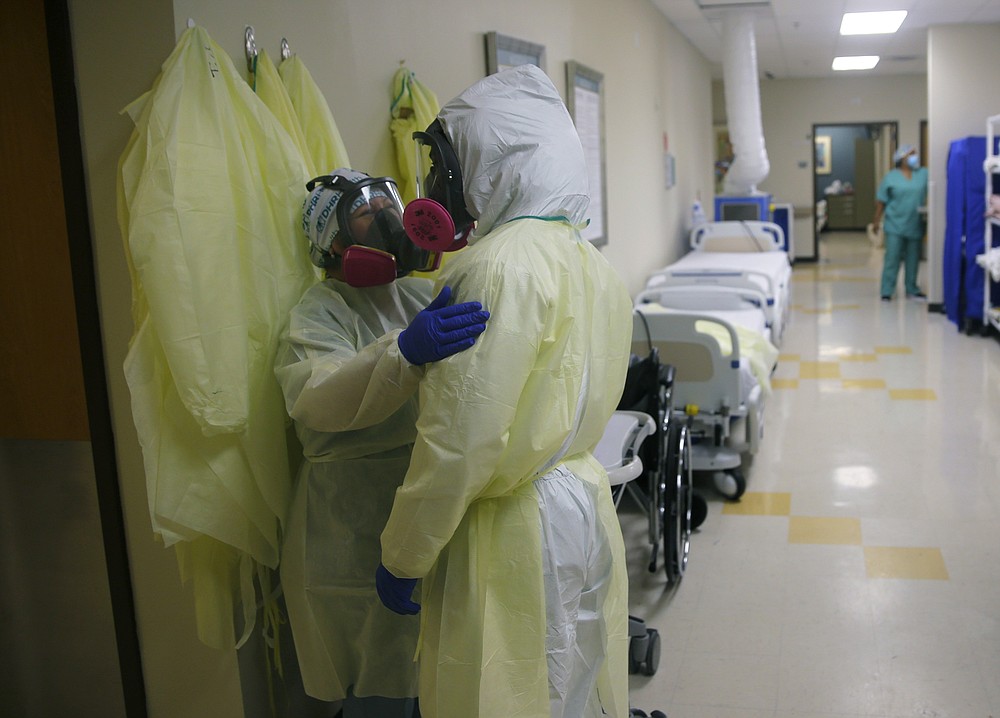 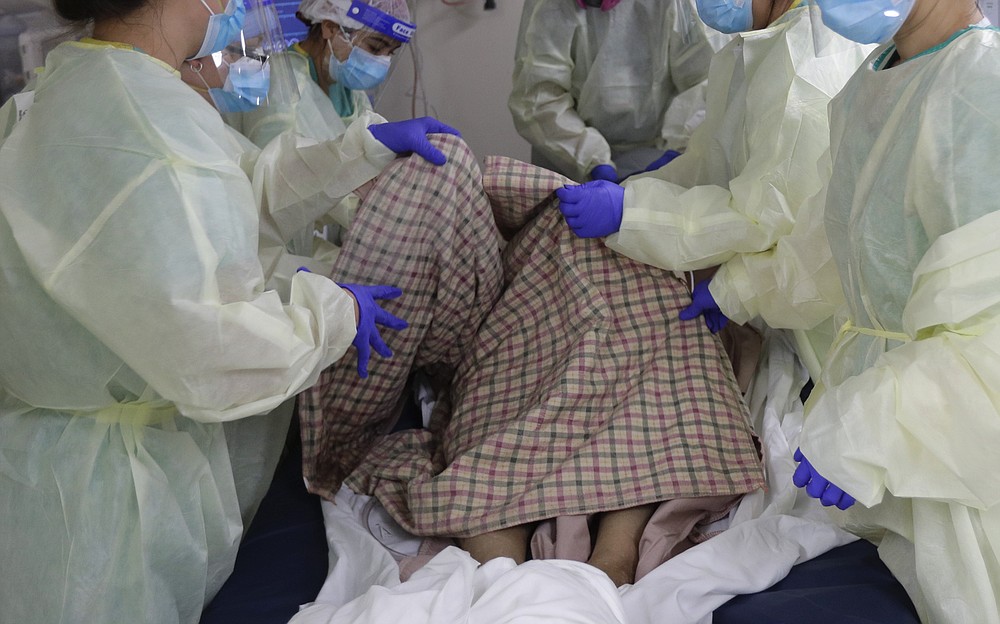 Medical personnel work with a COVID-19 patient at DHR Health, Wednesday, July 29, 2020, in McAllen, Texas. At DHR Health, the largest hospital on the border, roughly half of the 500 beds belong to coronavirus patients isolated in two units. A third unit is in the works. (AP Photo/Eric Gay) 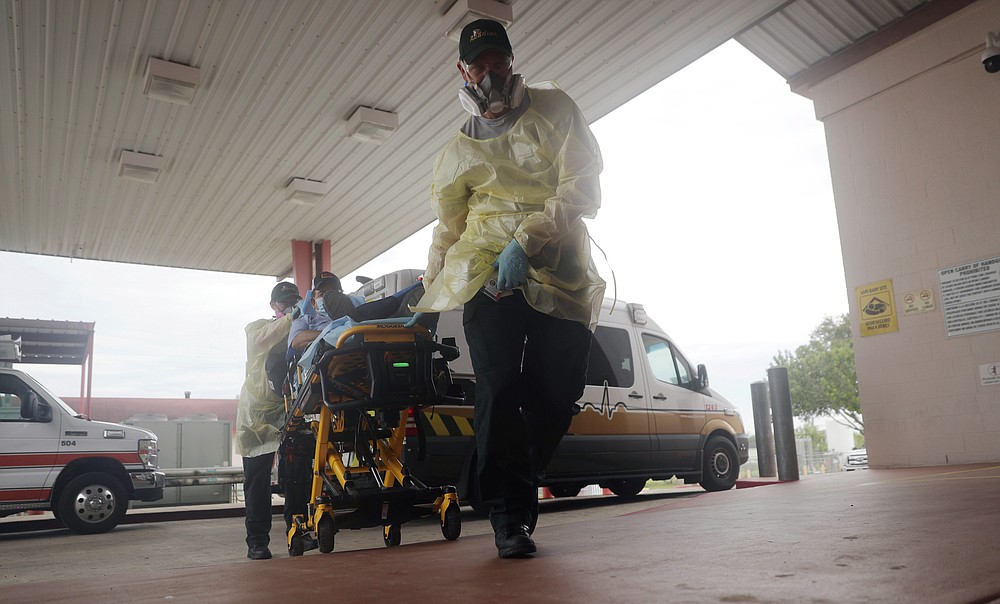 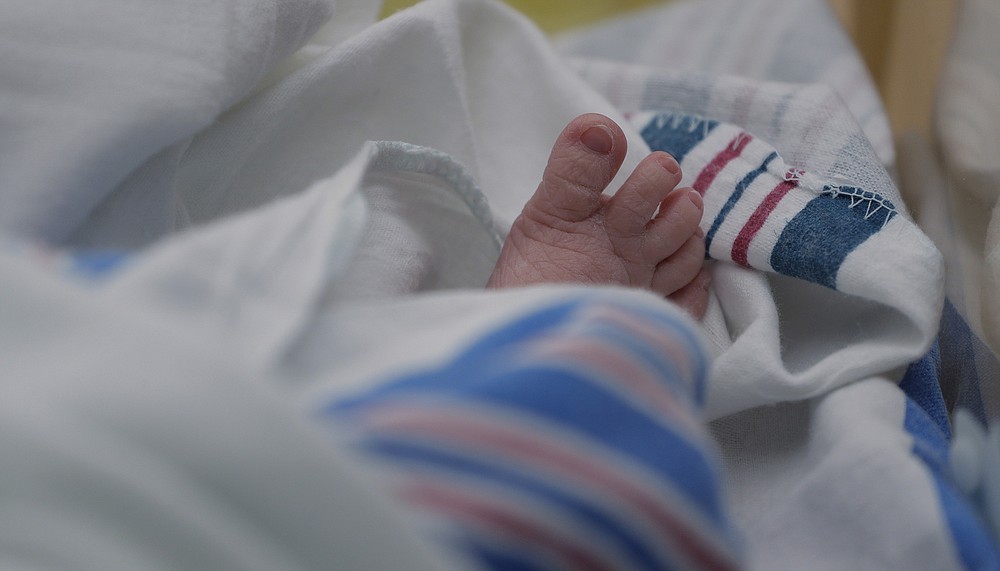 The toes of a baby born to a mom with COVID-19 are seen at DHR Health, Wednesday, July 29, 2020, in McAllen, Texas. The hospital lets COVID-positive mothers call the nursery over a video chat. (AP Photo/Eric Gay) 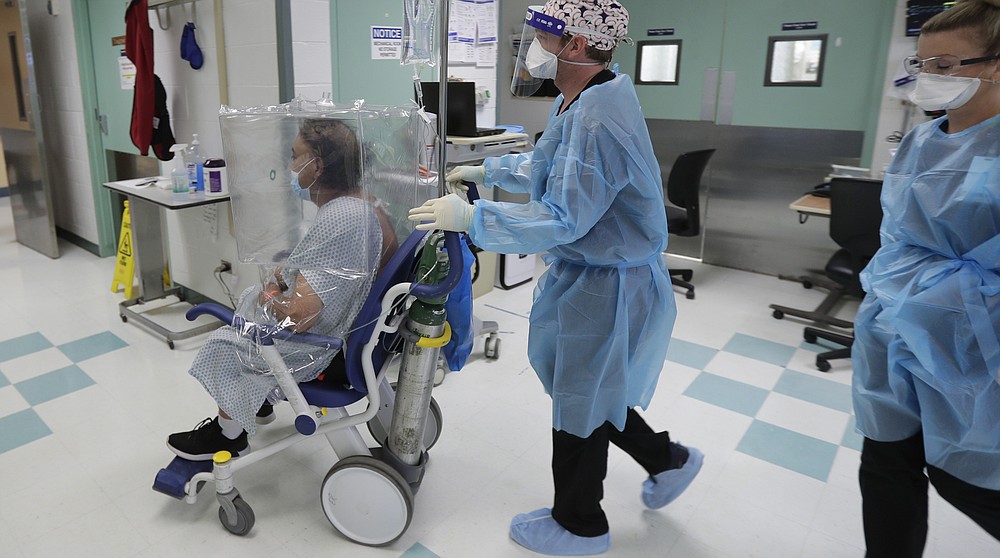 A man with COVID-19, wearing a protective cover, is transferred from the emergency room to a COVID-19 unit at Starr County Memorial Hospital, Monday, July 27, 2020, in Rio Grande City, Texas. For nearly a month, the Rio Grande Valley pleaded for a field hospital, but not until Monday was one ready. (AP Photo/Eric Gay)
ADVERTISEMENT