TAKEOUT TASTINGS: The eat goes on 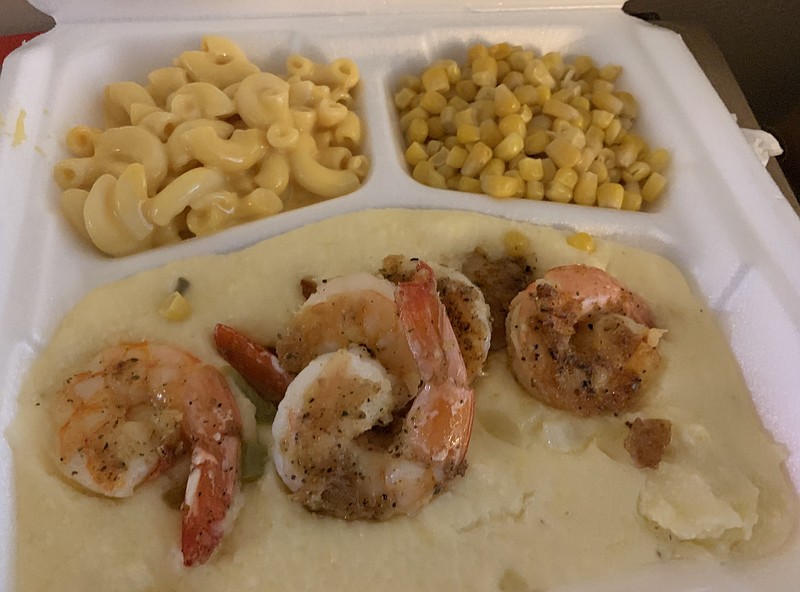 If Chuck Berry had written commercial jingles, and if he was writing one promoting restaurant takeout, we might have gotten this:

Anyway, we're still go-going to-go while dodging potentially deadly microbes. We're still taking out within a modest radius from our unpalatial home place, we're not taking requests and all meals are paid for.

WHAT WE GOT: Casa Manana Burrito ($9.70); Shrimp Ceviche ($8.75). The burrito was certainly impressive, in size if not necessarily in savor. It must have weighed more than a pound, and took awhile to tackle. The menu description doesn't mention what's inside — ground beef and rice, mostly — but does elaborate on the exterior: "Smothered with creamy green tomatillo sauce, melted cheese, guacamole & sour cream." We enjoyed it for what it was, though it took us awhile to slice it down with a knife and fork. Casa Manana offers ceviche — seafood "cooked" by marinating it in citrus juice — either as shrimp or fish; we were distinctly pleased with the shrimp, which were medium-size, plump, firm (mushy shrimp is a crime against culinary nature) and marinated in lime juice; served with pico de gallo over very crispy tostada chips that stayed fairly crunchy even after we let the dish sit for longer than we should have while we worked on the burrito. 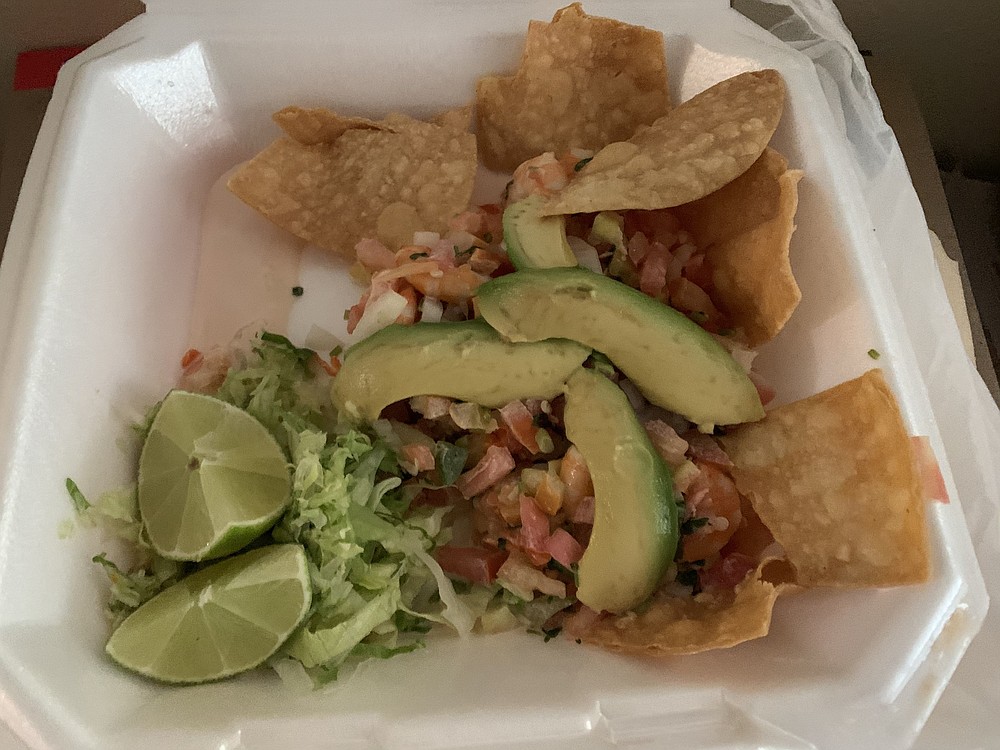 HOW IT WENT: Casa Manana's Heights dining room is open but we decided to order and pay online. Our food was ready within the 20 minutes it was promised and handed to us by a masked-and-gloved counter person. We were in and out in mere seconds.

HOW IT'S GOING: The place was busy at lunch time with dine-in customers and to-go orders awaiting pickup. Casa Manana also operates a restaurant in the far west end of town, known as Casa Manana West, 18321 Cantrell Road, and a taqueria kiosk in the River Market's Ottenheimer Market Hall downtown, which has remained closed. 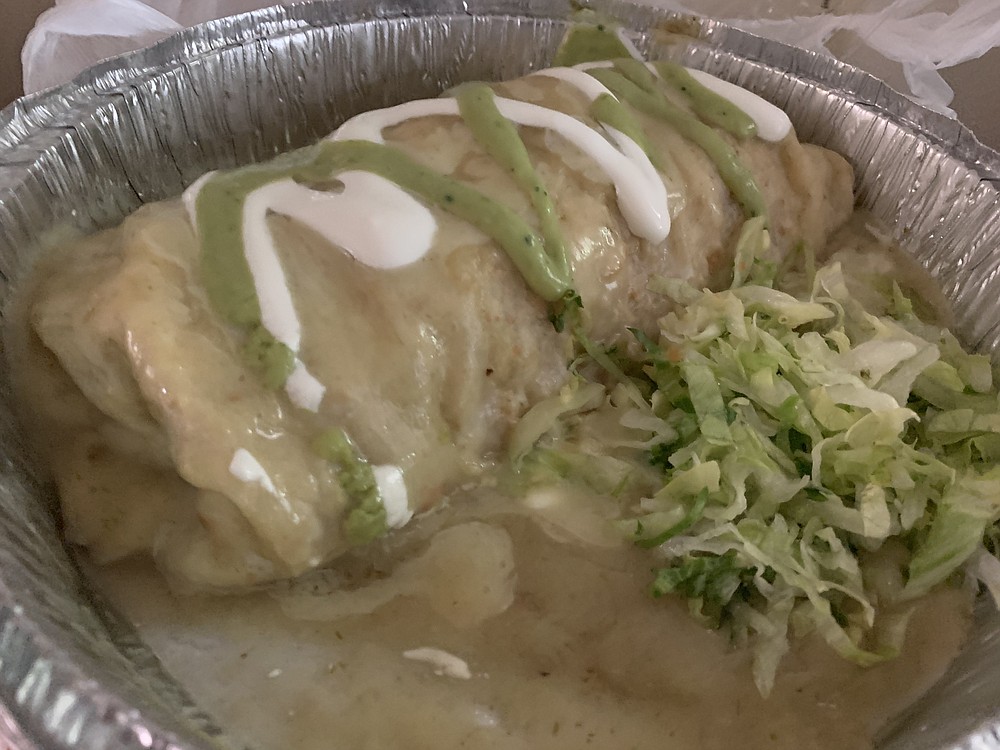 The Casa Manana Burrito is impressive in size if not entirely in savor. (Arkansas Democrat-Gazette/Eric E. Harrison)

WHAT WE GOT: Shrimp and grits lunch special ($9.69), with side corn and mac and cheese, and a slice of key lime pie ($3.69). This is one of the prettiest to-go presentations we've had lately, so we stopped to admire it a bit before we tucked in. The half-dozen shrimp were firm and nicely spiced; our only complaint is that they came with the tails on, a common practice nowadays that makes them look nicer but, when having to fish them out of something a little less firm like broth or grits, can be messy. We were in a little bit of luck in that Homer's grits are whipped more finely than some and formed a sort of quasi-pudding, which made them easier to eat in chunks and also made it easier to lift the shrimp off the top without having to really touch the grits. On the side we chose a very creamy, rich and cheesy mac and cheese and kernel corn, both in ample portions. And we couldn't resist getting a slice of the key lime pie, which was pleasantly tart and not all that sweet.

HOW IT WENT: The dining room is open, and we happened to be in the area anyway, so we dropped in unannounced and chose and paid for our food at the bar from the daily specials list. It took about 10 minutes for our order to emerge from the kitchen. Staff was masked and gloved; most if not all customers wore masks as they entered, but of course folks actually eating and drinking were bare-faced, and we're not entirely sure folks in the bar area, where we sat awaiting our order, were sufficiently socially distant.

HOW IT'S GOING: Homer's West was busy during a recent lunch period.

WHAT WE GOT: Falafel Shawarma Plate ($8.99). It's a misnomer — there's no shawarma (marinated meat, similar to, but not the same as, gyros) involved, although the menu includes several shawarma-based chicken and beef dishes and combos. This is just an ordinary falafel plate, except that it's a little better than just "ordinary": four huge ovoid herbed and lightly spiced fried chickpea patties on a bed of slightly tangy yellow rice, with a choice hummus or baba ghanoush — we went with the latter, and were well pleased by its slightly chunky texture and pleasantly spicy flavor. We also got what the menu called "salad" but which resembled more closely tabbouleh, with diced cucumbers, tomatoes and coarse-chopped mint and parsley. Plus a nice, fluffy piece of pita. 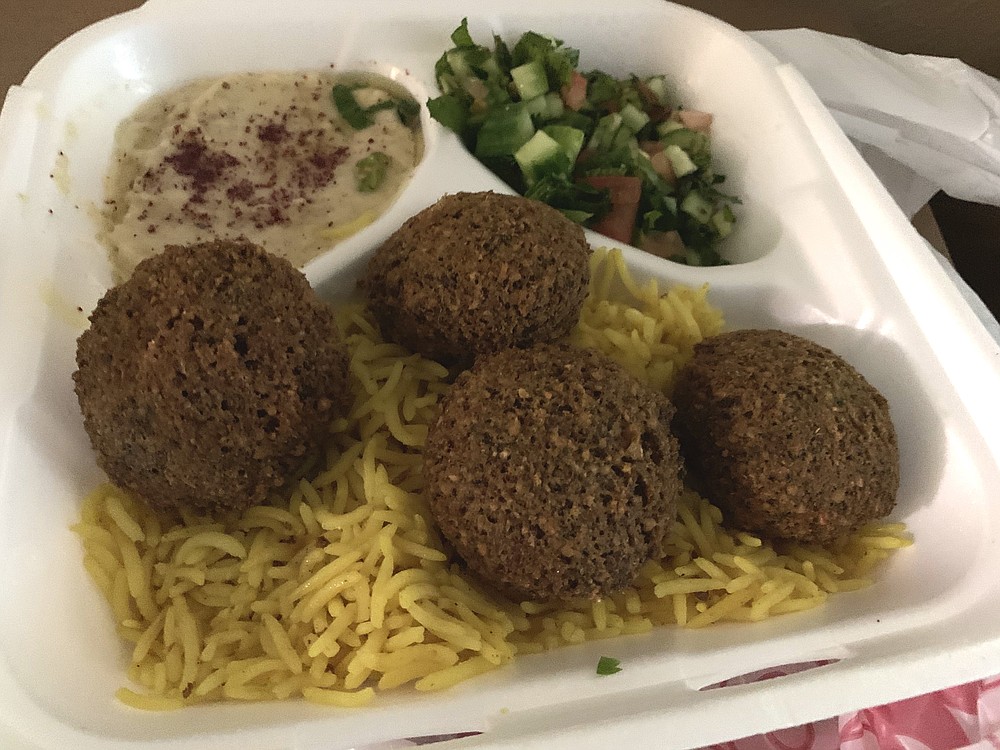 The Falafel Shawarma Plate from ZamZam doesn't actually come with any shawarma, but it does feature four pieces of falafel with hummus and a tabbouleh-like salad on the side. (Arkansas Democrat-Gazette/Eric E. Harrison)

HOW IT WENT: ZamZam used to have a grill/restaurant in a next-door storefront separate from, though with a connecting door to, its Middle Eastern-Asian-centered market; now it's fully incorporated into the back of the market. That area appears to be open for dine-in, but we placed our to-go order off the menu and while we waited wandered around the store seeing what else was worth purchasing. That allowed the nice woman running the grocery store counter to up-sell us on some herbed-and-seeded flatbread she pulled out of a box that had just come in off the truck — not only minimally boosting her sales for the day but saving her some tiny trouble of stocking it on the shelf. We also put on our bill a small bag of crouton chips with the same herb mixture.

(Yeah, all that and a bag of chips. Really.)

HOW IT'S GOING: It was fairly early in the market's operating day, and there were a couple of customers in the market and one other gentleman placing a to-go order in the grill. 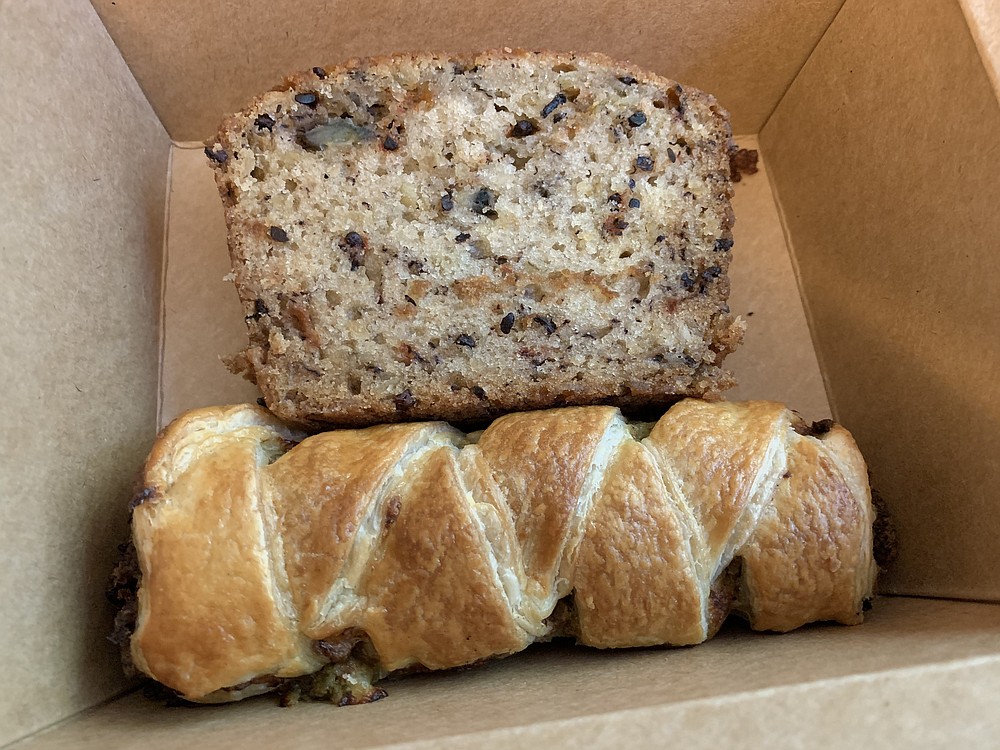 WHAT WE GOT: Slice of banana bread with cocoa nibs ($4.50) and a sausage roll ($6.75). The banana bread, we're told, is vegan; the sausage roll, of course, isn't. We got the last orphaned servings of both items, which together provided a pretty filling breakfast. Unlike some bakeries' offerings, the sausage roll here is a true roll, flaky pastry surrounding a core of vivid but not overwhelming crumbled sausage with a pleasant, somewhat oily mouthfeel. (Keep a napkin or two standing by because that oil also gets on your hands.) The generously thick slice of banana bread had just enough actual fruit in it to provide a mild banana taste; the cocoa nibs add both flavor and texture.

HOW IT WENT: There's an online order system through which you can get a cup of something brewed and pantry staples, among other offerings, but if you want to know what's available pastry-wise on any given day at Mylo, you're going to have to show up in person. (The chocolate babka and the very flaky filled croissants are always worthwhile, but things have a way of selling out.) We stopped by in person and ordered and paid for our food, along with a $3 cup of their daily "batch brew" — did we mention it's a coffee shop? — at the register

HOW IT'S GOING: The dining area is open with limited seating capacity, much of which was occupied, and there's almost always a line, short on some days, long on others, to order.