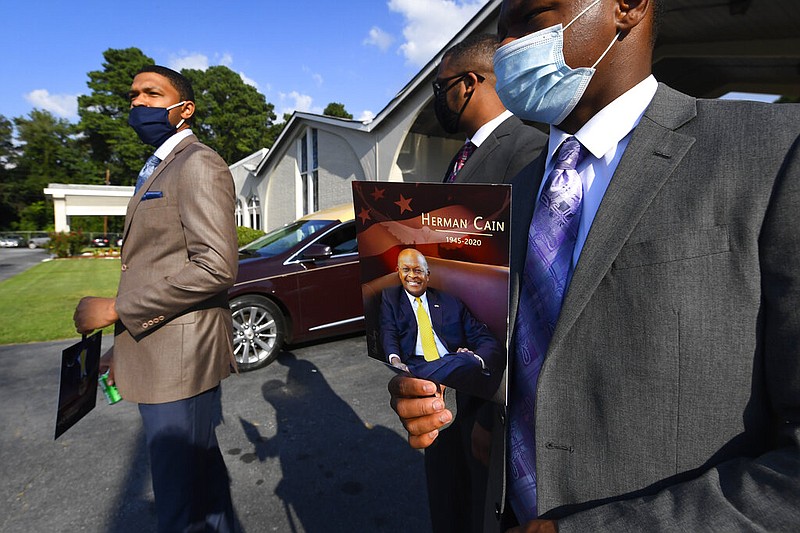 Attendees leave a public viewing for Herman Cain in Atlanta on Thursday, Aug. 6, 2020. The former Republican presidential candidate, radio host and entrepreneur died on July 30 after being hospitalized with covid-19. He was 74. (AP / John Amis )

ATLANTA — Herman Cain, the former Republican presidential candidate, businessman and close ally of President Donald Trump, was guided by his Christian faith in politics, business and his personal life, his pastor said at his funeral Friday.

Cain “made his mark on this world,” and his life will be celebrated for years to come, the Rev. Kenneth Lamont Alexander of Antioch Baptist Church North in Atlanta said.

“All of that is worthy to be mentioned, but we celebrate for another reason: The reason we celebrate today is because of his deep, abiding love for Jesus Christ,” he said. “The most important decision that Herman Cain ever made was to accept Jesus as his savior.”

Cain had been ill with the coronavirus for several weeks. A statement on his Twitter account said he tested positive for covid-19 on June 29 and was hospitalized July 1. It’s not clear when or where he was infected.

Cain was hospitalized less than two weeks after attending Trump’s campaign rally in Tulsa on June 20. Cain had been co-chair of Black Voices for Trump.

Trump called him “a Powerful Voice of Freedom and all that is good.”

“Herman had an incredible career and was adored by everyone that ever met him, especially me,” Trump said on Twitter shortly after he died. “He was a very special man, an American Patriot, and great friend.”

Cain briefly rose to the top of polls during the 2012 race for the Republican presidential nomination by highlighting a plan to simplify the tax code.

A longtime Republican, Cain was “a fierce advocate for conservative principles across the board,” U.S. Sen. Lindsey Graham, R-S.C., tweeted.

But Alexander said the stories about Cain that often went untold by the media involved what he did in his private life to help others have the same opportunities that he had.

He donated time and money to people evicted from their homes, and those addicted to drugs and alcohol, Alexander said. He mentored young people and worked to end hunger, he said.

In a service that ended with the gospel song “I’ll Fly Away,” Cain’s pastor noted that “there won’t be any Republicans or Democrats in heaven.”

“Herman Cain has won the victory,” he said.