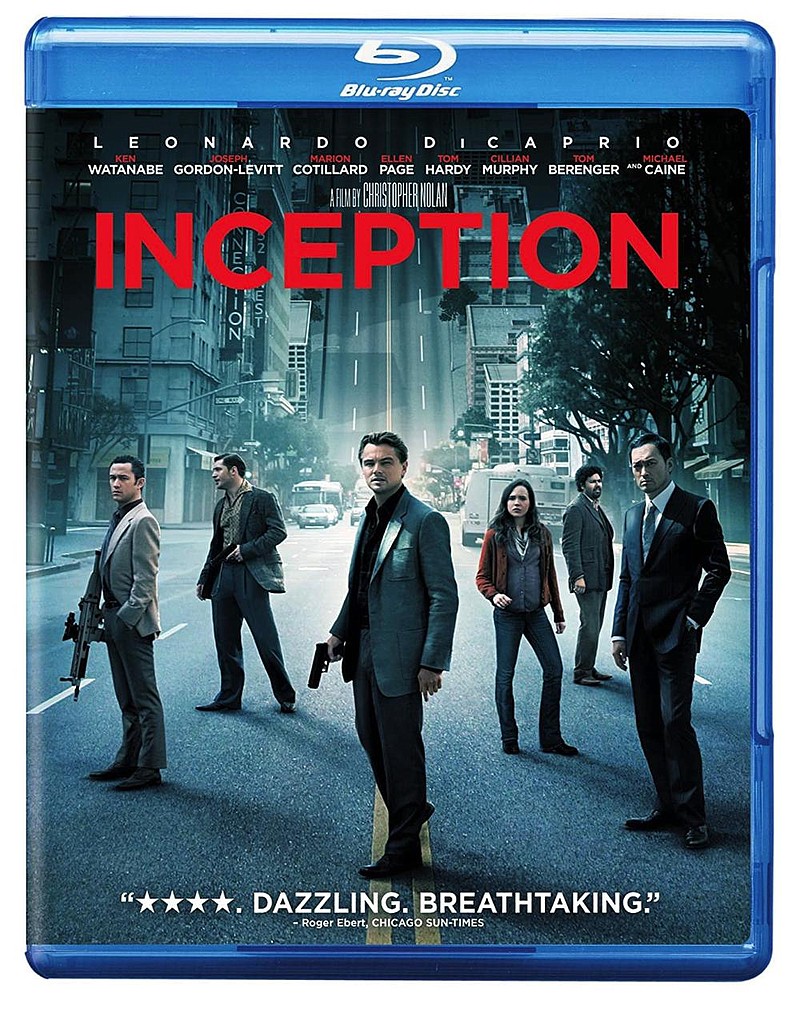 There's a lot of interest in director Christopher Nolan lately since his new film "Tenet" could be tantalizingly close to being released in movie theaters. (Looks like it might be released in China first, then show up in U.S. theaters in September.) So it's appropriate to revisit his 2010 psychological sci-fi adventure "Inception."

The story concerns Dom Cobb (Leonardo DiCaprio), a professional thief who isn't interested in pursuing money or jewels or other material objects. Instead he goes after the thoughts, dreams and secrets buried in the subconscious thoughts of others. This makes for a less-than-desirable existence that leaves him shunned, so when he gets a chance to reverse the harm he does by planting ideas instead of stealing them, he's all in. But there are foes intrigued by his ability to perpetrate psychic espionage.

Nolan's twisting-turning screenplay, expert use of CGI, and breakneck pace create an exceptional thriller that is thoughtful as well as suspenseful. Don't let the running time scare you away. Time flies when in the grip of a master storyteller.

"Shanghai Triad" (R, 1 hour, 48 minutes) Yimou Zhang's 1995 gangster film, set in the 1930s, can be taken as a straight genre exercise or a political allegory critical of the heavy-handed Chinese government, as it follows a young boy through his first week in service to a ruthless crime lord (Baotian Li). Shuisheng (Xiaoxiao Wang) arrives from the country to be the servant of Xiao Jingbao (Li Gong), a cabaret singer and the boss's fickle mistress, who is also carrying on a furtive affair with the gang's ambitious second-in-command Song (Chun Sun).

After a rival gang attacks the boss at his palatial home, he and a trusted few, including Shuisheng and Jingbao, retreat to an island hideout as various subplots play out and the boss becomes more suspcious and paranoid. An absolutely gorgeous film, with exquisite sound design and haunting visuals, "Shanghai Triad" is one of the most important and striking films of the '90s, on a par with Zhang's better-known masterworks "Ju Dou," "To Live" and "Raise the Red Lantern."

"Dead Ringer" (R, 1 hour, 36 minutes) A British action movie updating of "The Prince And The Pauper" set in the boy band milieu. The lead singer of a tribute band gets to take over for the singer he has made a career of impersonating. Who buried Paul? The producers get a bonus for casting Tom Sizemore. With Luke White, Danielle Harold, Jay Connor; directed by Richard Colton.

"House of Hummingbird" (not rated, 2 hours, 18 minutes) A sensitive portrait illustrating the delicacy of a teenage girl's struggle to know herself is revealed in the story o 14-year-old Eun-hee, drifts aimlessly across Seoul in 1994, in a vague search of affection and understanding, which is not forthcoming from her family. Then she encounters a new teacher who seems to see her as she is. With Ji-hu Park, Sae-byeok Kim, Seung-Yun Lee; written and directed by Bora Kim. Subtitled.

"The Resistance Fighter" (Not rated, 1 hour, 54 minutes) Story of real-life war hero Jan Nowak-Jeziorański, a Polish emissary trapped in London during World War II, who makes a a treacherous journey through Europe to reach Warsaw and spark the Warsaw uprising and liberate the city from Nazi occupation. The stuff of national legend in Poland, Nowak-Jeziorański went on to become a popular radio announcer in the years after the war. With Philippe Tlokunski, Julie Engelbrecht, Bradley James; directed by Wladyslaw Pasikowski. Subtitled.

"Ride Your Wave" (not rated, 1 hour, 35 minutes) Engaging animation illustrates the imaginative romance that develops between a college student devoted to surfing and a handsome firefighter. When a disaster threatens to tear them apart, a possibility of remaining in love arises. With Ryota Katayose, Rina Kawaei; directed by Masaaki Yuasa. Subtitled.

"Swallow" (R, 1 hour, 34 minutes) Disturbing, dark and sometimes difficult to watch, this is the unnerving tale of a newly pregnant housewife who, while living a seemingly ideal life, develops a dangerous habit of consuming dangerous objects, then realizes she must confront the complicated secret behind her compulsive obsession. With Haley Bennett, Austin Stowell, Denis O'Hare; directed by Carlo Mirabella-Davis.