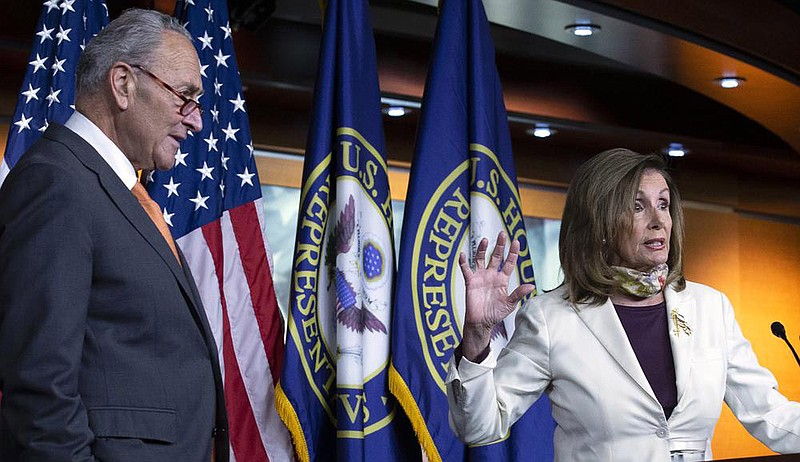 WASHINGTON -- White House officials and top congressional Democrats convened talks Thursday evening on a coronavirus relief bill, as acrimony over the negotiations spilled into public view and President Donald Trump threatened to act on his own, without Congress.

"Compromise has to have a dollar sign in front of it," Meadows said.

"I wouldn't be here if I didn't have at least some glimmer of hope," Meadows said. "If they're willing to be serious about negotiations, then we'll reach a deal. The president wants to get a deal."

Trump signaled earlier Thursday that absent a deal he will take executive action on several fronts, including on an eviction moratorium and unemployment assistance, as early as today.

The impasse is putting at risk more than $100 billion to help reopen schools, a fresh round of $1,200 direct payments to most Americans, and hundreds of billions of dollars for state and local governments to help them avoid furloughing workers and cutting services as tax revenue shrivels.

Senate Minority Leader Charles Schumer, D-N.Y., addressing reporters as he walked into the meeting, criticized the White House for setting a deadline and threatening to act alone.

"Meadows wants to have a deadline, or the president. I guess they can, but it wouldn't be good for the country," Schumer said. Asked about the prospect for executive orders, Schumer replied: "Everyone would agree that it's much better to come to a deal."

[Video not showing up above? Click here to watch » https://www.youtube.com/watch?v=yjj2L6hKFJM]

Even before the meeting among Pelosi, Schumer, Meadows and Treasury Secretary Steven Mnuchin got underway, tempers flared on Capitol Hill. Pelosi alleged in a television interview that Republicans don't give "a d*" about those in need, while Senate Majority Leader Mitch McConnell, R-Ky., accused Democrats of lying about GOP proposals.

As the process drags on, more than 30 million Americans are about to endure their second week without enhanced federal unemployment benefits, although they still receive state benefits.

[Video not showing up above? Click here to watch » https://www.youtube.com/watch?v=N206g2TxUEM]

Democrats are pushing for a larger aid package than what's favored by Meadows and Mnuchin. Meadows said ahead of the meeting that the White House has shown willingness to move higher than its initial $1 trillion starting point, while accusing Democrats of refusing to budge from their $3.4 trillion opening offer.

"We believe the patient needs a major operation, while Republicans want to apply just a Band-Aid," Schumer said. "We won't let them just pass the Band-Aid, go home and leave America bleeding."

McConnell said he would be keeping the Senate in session "unless and until the Democrats demonstrate they will never let an agreement materialize." However, multiple lawmakers said they were heading to their home states and would return if a deal comes together.

Trump wrote in a Twitter post that he has told staff members to prepare for a series of executive actions that can be implemented if no deal is reached.

"Upon departing the Oval Office for Ohio, I've notified my staff to continue working on an Executive Order with respect to Payroll Tax Cut, Eviction Protections, Unemployment Extensions, and Student Loan Repayment Options," he wrote on Twitter.

The evening meeting was expected to be a lengthy negotiating session that could determine whether a near-term deal is possible at all. The same group has been meeting nearly daily for more than a week.

The coronavirus pandemic has hammered the U.S. economy since February, and some of the largest provisions in the $2 trillion Coronavirus Relief, Aid and Economic Security (CARES) Act, which passed in March, have lapsed.

The impasse persists amid the weak economic conditions and the spread of the pandemic. In an interview on CNBC on Thursday, Pelosi said Republicans' refusal to recognize the country's situation and needs is standing in the way of getting an agreement.

"Perhaps you mistook them for somebody who gives a d*," Pelosi said. "That's the problem. See, the thing is, they don't believe in governance."

Speaking on the Senate floor a short time later, McConnell blamed Democrats for the expiration of emergency unemployment benefits, because Democrats objected when Republicans tried last week to renew them on a short-term basis.

Republicans have sought to extend the benefits at a lower level, arguing that the $600 weekly bonus -- coming on top of whatever state unemployment offices pay -- acts as a disincentive for people to return to work.

McConnell also cited a Washington Post article that found that Schumer had at one point wrongly described McConnell's proposal to extend liability protections to businesses, health care workers, schools and others. McConnell is insisting this provision be part of any bill.

"Instead of getting serious, the Democratic leaders have chosen instead to misrepresent and even lie about what's at stake," McConnell said.

Although Democrats have rejected the idea that Trump could spend money without Congress' approval, the Trump administration has asked federal agencies to identify all of the money they have not yet spent from the CARES Act.

White House officials are trying to determine whether that money could be redirected and used for other purposes, such as temporary unemployment benefits.

Pelosi has said Trump could act unilaterally to extend the eviction moratorium, and speaking on CNBC she encouraged him to do so -- while saying that it would have little value without money for rental and housing assistance.

Republicans are rejecting spending anywhere near what Democrats want, but a half-dozen or so Senate Republicans support more expenditures in such areas as additional aid for cities and states. Democrats want around $1 trillion in state and local aid, but Trump has dismissed that as a "bailout" for mismanaged states, and the administration put $150 billion on the table earlier this week.

While Democrats are pushing to renew the $600 weekly emergency unemployment benefits that expired last week, the administration has offered $400 weekly through early December.

Democrats are also pushing for money for food stamps and child care. The two sides are arguing about money for schools and the U.S. Postal Service. Republicans have sought to link some of the school money to schools reopening, which Democrats oppose.

There is a dispute about pensions, and multiple other issues also remain unresolved.

McConnell has acknowledged the divisions in his own conference, with about 20 GOP senators reluctant to spend any more money at all after Congress already approved four bipartisan bills in March and April totaling around $3 trillion. McConnell is not taking an active part in the talks and has said he'll support any deal the administration officials and Democrats are able to reach.

"It's a whole lot of nothing," Sen. John Cornyn, R-Texas said of the negotiations.

"I can't tell you how disappointed I am that more progress hasn't been made," said Sen. Marco Rubio, R-Fla., blaming Democrats for the stall. "Frankly I thought given everything that was going on eventually that fever would break."

Information for the article was contributed by Erica Werner, Jeff Stein, Seung Min Kim and Paul Kane of The Washington Post; and by Andrew Taylor of The Associated Press. 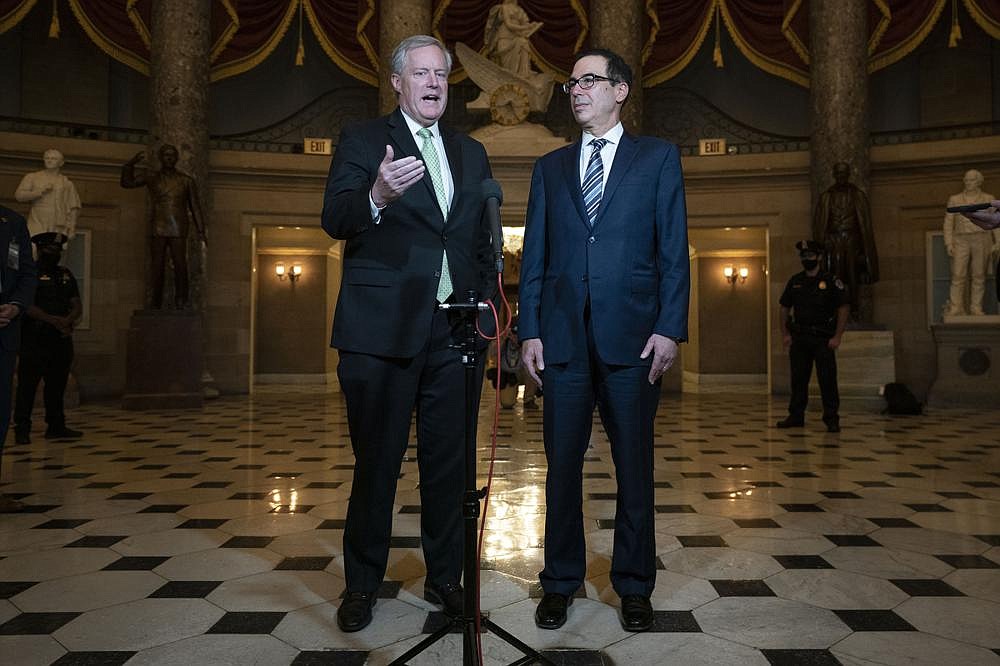 White House Chief of Staff Mark Meadows (left) and Treasury Secretary Steven Mnuchin criticized Democratic congressional negotiators Thursday. Meadows said a compromise on a stimulus package “has to have a dollar sign in front of it” for talks to go forward. (AP/Carolyn Kaster)
ADVERTISEMENT