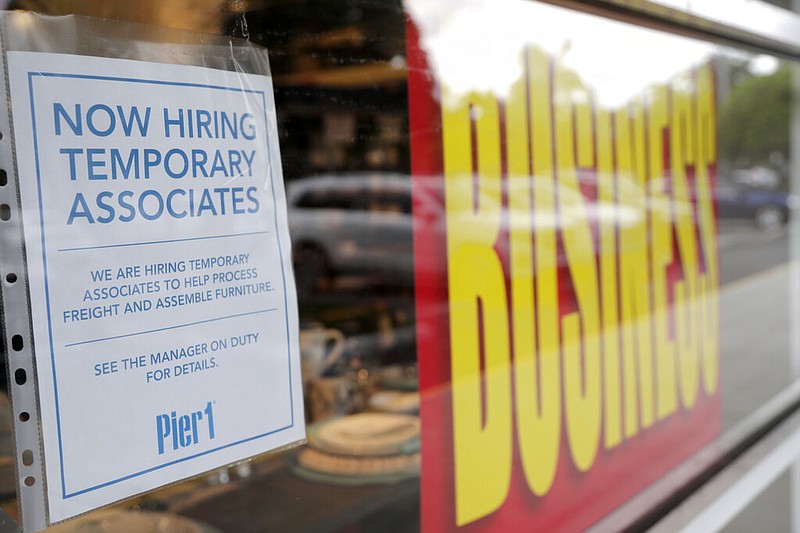 A sign advertises hiring of temporary associates at a Pier 1 retail store, which is going out of business, during the coronavirus pandemic, Thursday, Aug. 6, 2020, in Coral Gables, Fla. ( AP/Lynne Sladky )

WASHINGTON -- The U.S. economy added 1.8 million jobs during July, sending the unemployment rate down to 10.2%.

It was a welcome bit of good news in a grueling summer for the United States, but it was tempered with signs that the labor market is cooling.

In May, the first month of gains after the pandemic sent the economy into a tailspin, 2.7 million people were added back to payrolls. In June, employment surged by 4.8 million. July's gains were modest in comparison.

Economists warn that the monthly unemployment number, based on a survey taken in mid-July, lags behind the more current snapshots of the market, as the pandemic's rise has touched off more closures, restrictions and disruption around the country.

The job growth was driven by hiring in sectors that had been hit hard by the pandemic, such as leisure and hospitality, which increased by 592,000 jobs -- about a third of the total monthly gain. Employment at restaurants, bars and other food and drink services rose by 502,000. Retail employment gained back 258,000 jobs. Amusements, gambling and recreation added another 100,000.

But employment in those sectors remains well below pre-pandemic levels, dashing hopes of a V-shaped bounce-back, with more than half of the 22 million jobs that have been lost since February yet to recover.

More than 30 million people are currently receiving some form of unemployment insurance, and many say they are being pushed to the brink by the expiration of the extra $600 a week in federal unemployment benefits, in an economy where there is little hope of finding new work.

On Thursday, data from the payroll processing company ADP showed a slowdown in hiring in July. The Federal Reserve Bank of St. Louis pointed to indicators this week from the scheduling company Homebase that showed the recovery in employment that took place in May and June had begun to halt as a result of the spike in coronavirus infections. That data showed a strong correlation between states with larger infection numbers and the slowdown in the labor market's recovery.

"We're going to see a slightly different picture when the impact of that is fully felt," said Lisa Cook, an economist at Michigan State University. "It's an encouraging as a stand-alone report but what is to come scares me. This is still a really weak market."

The 10.2% unemployment rate remains one of the highest since World War II, and the slowdown in gains raises the uncomfortable specter that double-digit unemployment may remain for longer yet should the labor market flatline -- or worsen.

"No one should take confidence in this report -- the economy has moved sideways since June," said Joseph Brusuelas, chief economist at RSM. "Any notion that the improvement in the top line provides a convenient excuse for policymakers to avoid hard decisions about more fiscal aid aimed at the unemployed should be summarily dismissed."

Though the unemployment rate fell last month from 11.1% to 10.2%, that level still exceeds the highest rate during the 2008-09 recession.

"The progress is encouraging, but let's not lose sight of where we currently are," said Nick Bunker, economic research director at the jobs website Indeed.

Evidence suggests that the pandemic's damage to the economy will take longer to mend than was envisioned in the spring. Back then, the widespread hope was that temporarily shutting down the economy would defeat the virus, after which businesses could quickly reopen and call back their laid-off workers.

Those recalls are still happening, and they accounted for the bulk of July's job gains. But the resurgence of the virus in much of the country has reversed some reopenings and likely made it harder for many people to get back to work. Nearly half the unemployed have been jobless for 15 weeks or more, up from just one-tenth in May. And the number of Americans who say their job losses are permanent was flat last month despite the hiring gain.

The proportion of Americans who are either working or looking for work also slipped, to 61.4%, down 2 percentage points from February. That signals that the job gains of the past few months haven't encouraged many people to start seeking work.

While companies are hiring, including Amazon Inc., Alphabet Inc., Ford Motor Co. and D.R. Horton Inc., layoffs have been piling up in recent weeks, particularly in industries most affected by the pandemic. American Airlines Group Inc. advised that 25,000 jobs are at risk when aid expires and United Airlines Holdings Inc. said it would furlough one-third of its pilots. L Brands Inc., which owns Victoria's Secret, said it would lay off 15% of its workforce. Delta Air Lines is asking for 3,000 more flight attendants to take unpaid leave.

The July jobs report also showed little improvement for Black Americans, with their unemployment ticking down only slightly to 14.6%, compared with 12.9% for Hispanic workers, and 9.2% for whites. The joblessness rate for women, who carry the most responsibility for child care and home care duties, fell to 10.5% and for men it dropped to 9.4%.

Friday's report suggested, too, that high unemployment and shriveled incomes for many households will remain an issue through the November election and a potential threat to President Donald Trump's prospects.

Trump quickly celebrated the report with a pair of tweets, including one that read "Great Jobs Numbers!" But aides are nervous that the recovery is still fragile. The president remained out of sight Friday, beginning a three-day weekend at his Bedminster, N.J., golf club.

His presumptive Democratic opponent, Joe Biden, was quick to blame Trump for the potentially faltering recovery.

"It did not have to be this bad. We are in a deeper economic hole than we should be because of Donald Trump's historic failure to respond to the pandemic, and the pace of recovery has now slowed because of Trump's continuing inability to come up with a plan to control the virus," Biden said.

Information for this article was contributed by Eli Rosenberg of The Washington Post; Christopher Rugaber and Jonathan Lemire of The Associated Press; and Katia Dmitrieva and Reade Pickert of Bloomberg News. 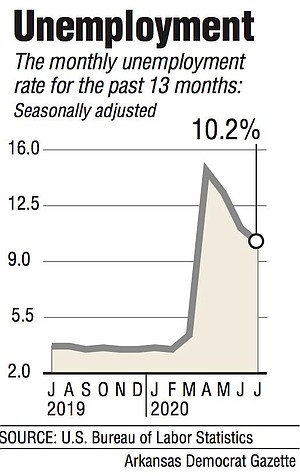