Dear Mahatma (via phone): I just got off the Interstate 430 north exit at Cantrell Road. The time allotted to off-ramp traffic has resulted in a dangerous backup onto the interstate. -- Traveler

Dear Traveler: We immediately sent an email to the Arkansas Department of Transportation and the Little Rock traffic staff. The former bowed to the authority of the latter.

Regarding the latter, that was Bill Henry, the city's chief traffic engineer.

Henry said the time for off-ramping traffic has already been increased, and must be balanced with the needs of traffic on Cantrell Road. Backups sometimes happen because of problems on the interstate and congestion on Cantrell. The city's traffic engineers, he said, continue to monitor that location.

That location, remember, is part of a project to widen Cantrell, also Arkansas 10, between Pleasant Valley Drive and Pleasant Ridge Road. This road carries about 54,000 vehicles a day, and thus is the busiest noninterstate road in our small, wonderful state.

Travelers must be patient. Completion of the project is expected in the middle of 2023. We did the arithmetic and conclude that is: Three. More. Years.

On a different topic, we are occasionally in contact with Vic Fleming, Little Rock's traffic judge.

A driver from Mississippi sent an email to the Little Rock court and threw herself on a sword. Unnecessarily, it turns out.

"This is hopefully an unusual question, but I want to know if I have a ticket."

So begins the email.

"From the address above you can see I am not a residence (sic) of Arkansas and know rules and laws differ from place to place. In my area traffic cameras are non existence. (sic) I travel through your city on occasion and admittingly have had lights change as I get under them. I have been told that if I do not get anything in the mail then I'm fine. I cannot in good conscious (sic) do that. If I have one then I need to make arrangements to pay."

The driver included her name, address and driver's license number. She did not have a ticket in Little Rock.

Judge Fleming speculated the Mississippian drives through Memphis, which he said has an impressive system of camera-monitored intersections.

Dear Mahatma: I've decided you and Dr. Fauci look so much alike you could be brothers. He's my latest hero. -- Steve

Steve: You are not the first to make the comparison. Another reader thinks we are a cousin to Dr. Anthony Fauci.

It's true we are both unusually handsome. Also snazzy dressers. 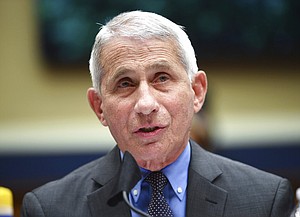 Photo by Kevin Dietsch / AP
Dr. Anthony Fauci, director of the National Institute of Allergy and Infectious Diseases, testifies before a meeting of the House Committee on Energy and Commerce on Capitol Hill in Washington in this June 23, 2020, file photo.

The comparison ends there. He is a physician, scientist and director of the National Institute of Allergy and Infectious Diseases.

We have spent a life in newspapering, work as disreputable as any.

Aw, shucks. Journalist Irv Kupcinet said it best: "I've never wanted to do anything but be a newspaperman ever since I was 13."