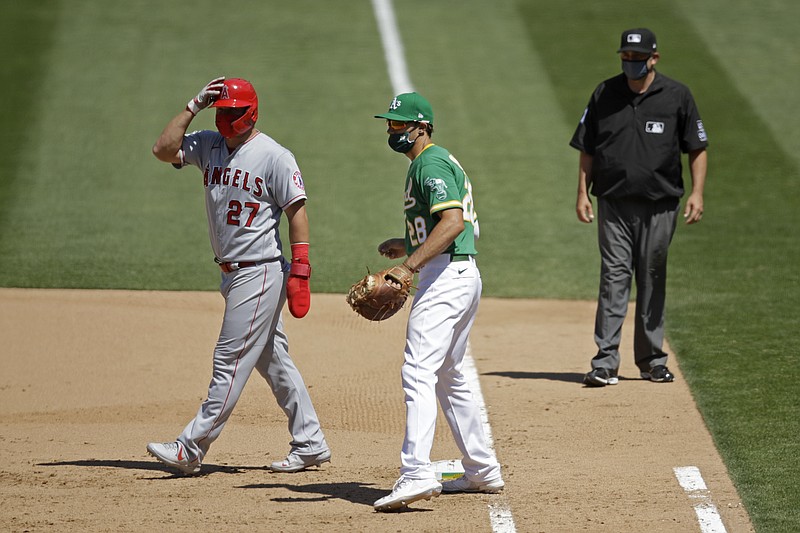 FILE - In this Monday, July 27, 2020, file photo, Oakland Athletics' Matt Olson (28) wears a mask as Los Angeles Angels' Mike Trout, left, also wears one while taking a lead off first base during the eighth inning of a baseball game in Oakland, Calif. Baseball's Western Divisions have so far avoided any COVID-related schedule disruptions and they're trying to keep it that way. (AP Photo/Ben Margot, File)

PHOENIX -- It was a rarity at the time and provided a very 2020-style photo op: Oakland's masked first baseman Matt Olson chatting with Los Angeles Angels star Mike Trout, who was also masked as he prepared to run the bases.

Less than two weeks later, it's clear it was the start of the trend. When it comes to Major League Baseball's ongoing fight to avoid covid-19, it's the West that's had the most success.

Now it's trying to keep it that way.

"I'm very excited about what's happening here in the West," Arizona Manager Torey Lovullo said. "I don't know if it's dumb luck -- I think all of these organizations have sent really good messages."

The shortened 60-game schedule for this season has basically turned baseball's 30 teams into three separate 10-team leagues for two months. The NL and AL West will play only teams in their region until the playoffs begin. The same is true for the AL and NL Central, as well as the AL and NL East.

Two of those three 10-team groups already have seen major scheduling disruptions because of covid-19. The Miami Marlins had a huge outbreak that affected 21 members of the traveling party, and it scrambled the schedule for multiple teams in the East. A smaller outbreak among the St. Louis Cardinals meant several teams in the Central had to adjust.

The West has avoided a similar situation despite multiple franchises being located in states that are current hot spots. California, Texas and Arizona are all still fighting high caseloads.

It's a big reason no one dares get cocky. Vigilance is preached.

"This is a tough virus, man," Colorado Manager Bud Black said. "You don't know how it's going to play out. A lot of these positive cases could come from very innocent means. I don't know. I just know that individually and from a team component we have to do what we're asked to do."

Overall, baseball has had widespread success in holding off the virus. The league said Friday that it had conducted 13,043 tests over the past week with only 13 positives, which comes out to a positive rate of 0.1%.

The biggest motivation for taking precautions is obvious: keeping players and staff safe from a potentially dangerous illness. While there haven't been many serious cases in the big leagues, Atlanta's Freddie Freeman fought off a very high fever and Boston's Eduardo Rodriguez is out for the season because of heart inflammation related to his coronavirus case.

There are also competitive reasons to stay safe. Missing a week of games and quarantining in hotels is not a great way to maintain fitness. When one team gets the virus, several others are affected. MLB recently announced a long list of schedule changes that were needed because of the recent outbreaks, and 12 teams were involved.

The scheduling adjustments probably aren't over: A three-game series between the Cardinals and Cubs has been postponed after the Cardinals had another positive test.

"It would be devastating to have to sit down for an extended period of time, to potentially miss a player or two that is extremely important to your lineup and worry about the contact tracing situation," Lovullo said. "The tail keeps wagging. We made sure we talk to the guys because it's not just you, it's going to be an effect that's felt throughout the organization and probably your family."

San Diego Padres Manager Jayce Tingler said it's important to be willing to adapt as more is learned about the best way to avoid problems. He said his team's recent trips to San Francisco and Colorado were relatively smooth.

"It seems like we've been going through this pandemic, it feels like, for a long time, but I think the truth is, the scientists, the doctors, they're learning new things," Tingler said. "So as more information comes out, the protocols seem to change a little bit."

Players in the West are well aware that one mistake -- no matter how innocuous -- could end the West's success.

"After seeing what's going on with the Marlins, that's unfortunate, but everything that we've been doing over here we've been making sure that we're staying on top of wearing our masks," A's Gold Glove third baseman Matt Chapman said. "Our team's doing our part because we don't want to be one of those teams like the Marlins that screws it up for everybody.

"We're taking everything super serious over here, we're wearing our masks, we're being smart off the field because that's another big thing." 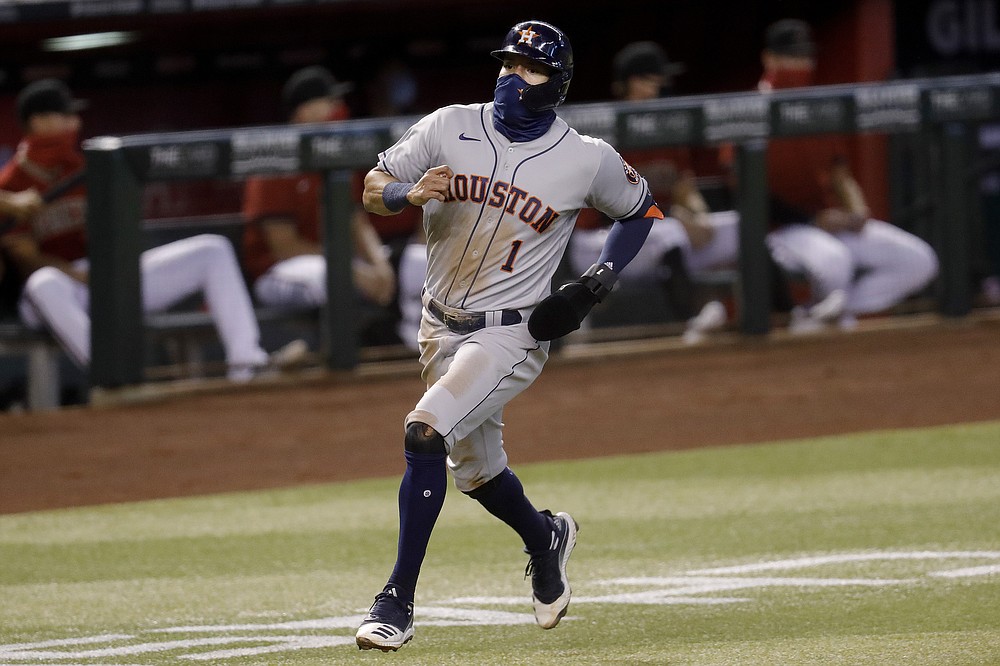 Houston Astros' Carlos Correa (1) scores on a base hit by teammate Abraham Toro during the second inning of a baseball game against the Arizona Diamondbacks Wednesday, Aug. 5, 2020, in Phoenix. (AP Photo/Matt York) 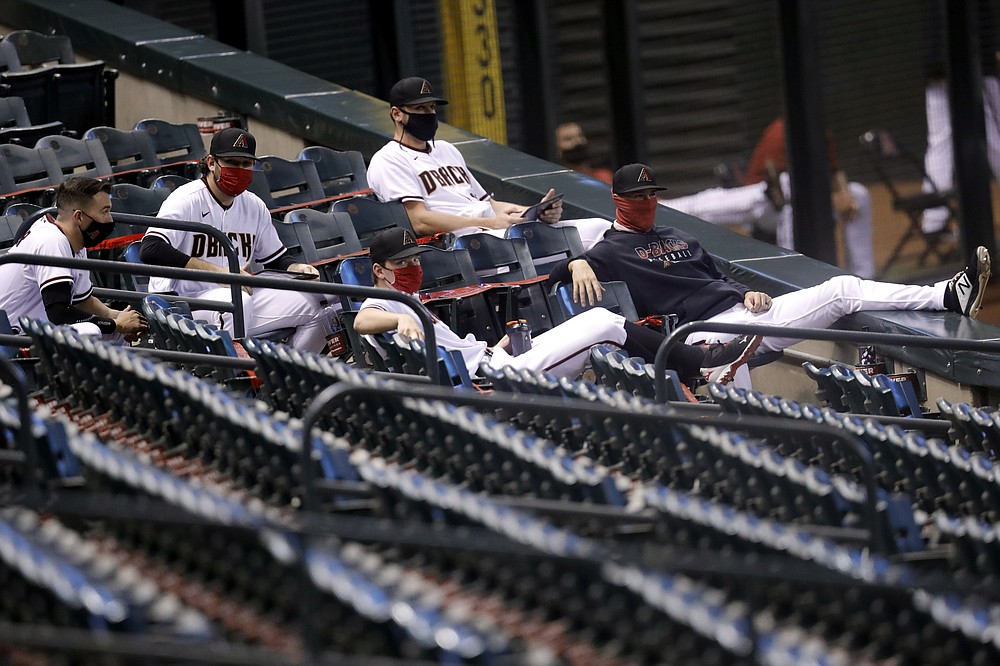 Arizona Diamondbacks players sit in the stands during the first inning of a baseball game against the Houston Astros Thursday, Aug. 6, 2020, in Phoenix. (AP Photo/Matt York) 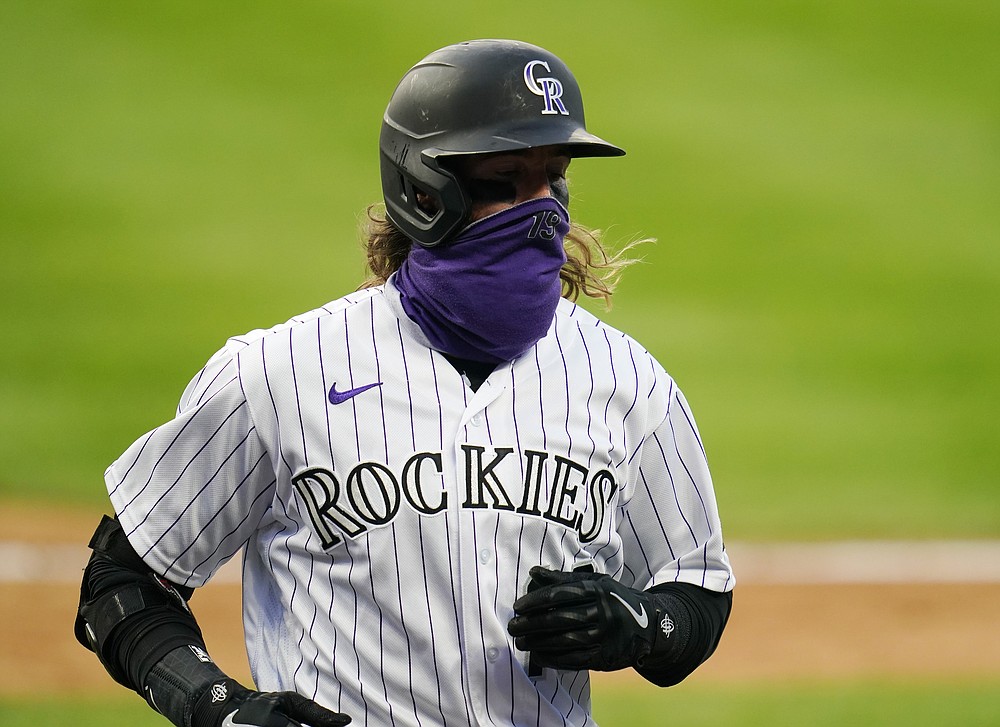 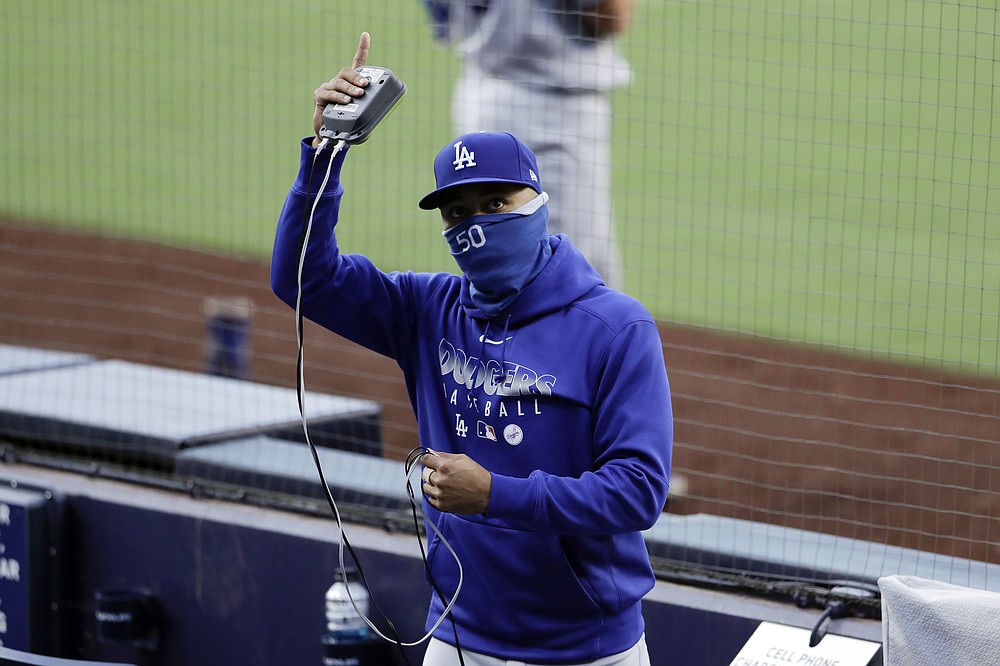