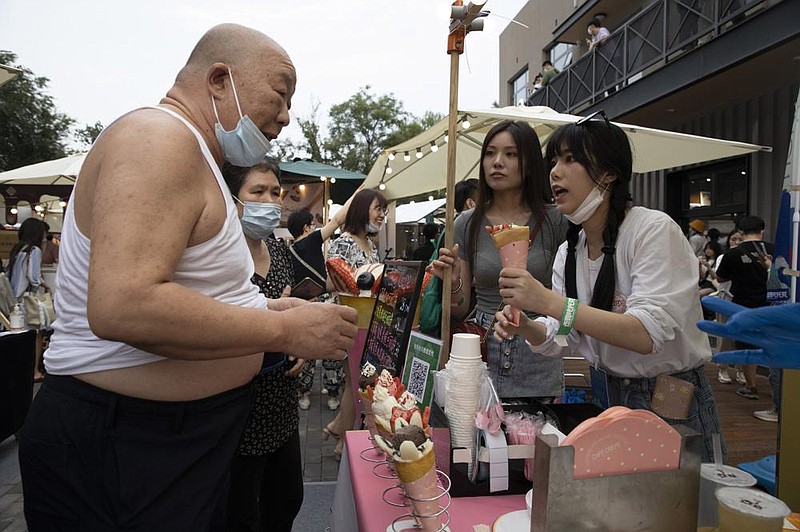 A Beijing resident gets ready to try out an ice cream crepe Sat- urday at an open-air market in the city. (AP/Ng Han Guan)

Bomb kills 8 soldiers at base in Somalia

NAIROBI, Kenya -- A car bomb exploded at the gates of a military base in Somalia's capital Saturday, killing at least eight soldiers and wounding 14 others, with the toll expected to rise, police said.

The al-Qaida-linked al-Shabab extremist group quickly claimed responsibility via its radio arm, Andalus. The group often targets military sites in Mogadishu and controls large parts of southern and central Somalia, with little sign of being hampered by the coronavirus pandemic.

The stadium's reopening had been celebrated by Somalia's president and others as a sign of the Horn of Africa nation's attempts to rebuild from three decades of conflict and chaos -- though mortar blasts outside sent fans ducking for cover.

Al-Shabab has been the target of a growing number of U.S. military airstrikes under President Donald Trump's administration, with at least 63 strikes carried out last year alone.

But the Somalia-based extremist group has been resilient, recently improving its ability to build explosives and supporting its deadly work by taxing travelers along major routes in the country and extorting businesses.

ROME -- Women in Italy can now use the abortion pill on an outpatient basis rather than be hospitalized to terminate a pregnancy.

Previously, women in Italy had to be admitted to the hospital to take mifepristone, which terminates a pregnancy by causing the embryo to detach from the uterine wall.

Women's groups and pro-choice advocates lobbying for outpatient use had argued that the hospitalization requirement discouraged use of the drug, given the high levels of conscientious objection to abortion within the Italian health care service.

Over the objections of the Catholic Church, Italy in 1978 legalized abortion and in 2009 approved the use of the abortion pill through the seventh week of gestation.

Speranza's deputy, Sandra Zampa, has said it was time to review the guidelines given that a decade of experience had showed the drug could be safely administered without hospitalization. The new guidelines say it can be used up to the ninth week.

Conservative lawmaker Giorgia Meloni blasted the new guidelines as a step back for women, saying the "do-it-yourself" abortion pill taken outside a hospital setting would deprive women of necessary psychological and medical care. In a statement reported by the newspaper of the Italian bishop's conference, Meloni said it would make women "experience a difficult and dangerous procedure in solitude."

ADDIS ABABA, Ethiopia -- An official in Ethiopia's northeastern Afar region says heavy flooding has displaced some 20,000 people from their homes.

"The flooding has caused damages to properties and killed several dozens of animals," Kulsuma Burhaba Ali, deputy head of the region's disaster prevention department, told the state-affiliated Fana Broadcasting Corporate. "The flooding was caused as the Awash River overflows and affected 10 out of 17 counties in the region."

There was no word of any deaths.

The official said an additional 51,000 people are in danger, but efforts are underway including airlifts by Ethiopia's military.

Photos posted on social media show residents surrounded by fast-flowing waters and attempting to save their animals.

Ethiopia's Afar region is mostly inhabited by nomadic herders and is home to the Danakil Depression, a popular tourist area that has been called the hottest place on Earth.

MOSCOW -- Thousands of demonstrators gathered again Saturday in the major Russian Far East city of Khabarovsk to denounce the arrest of the region's governor a month ago.

Sergei Furgal was arrested on July 9 on suspicion of involvement in murders and taken to jail in Moscow. The estimated 3,000 demonstrators protested the charges and want him returned to the city for trial. Furgal has denied the charges. 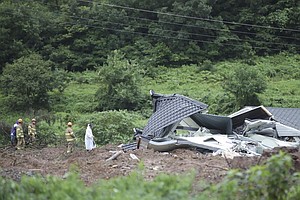 Photo by YONHAP
Rescue workers search for people Saturday in the ruins of a house that collapsed during a landslide caused by heavy rain in Gokseong, South Korea. (AP/Yonhap/Chun Jung-in)

The protests have posed a challenge to authorities in Moscow.

Furgal, who has been removed from his post, is a popular figure in the region bordering China about 3,800 miles east of Moscow. Since his arrest, daily demonstrations have been held in the city, with attendance peaking on weekends.

Demonstrations in support of the Khabarovsk protesters were held in at least seven other cities in Russia. The OVD-Info organization that monitors political arrests said at least 10 people were arrested in those demonstrations.

No arrests were reported in Khabarovsk, where authorities have not interfered with the demonstrations, apparently hoping they will fizzle out.