'Bad boy' was actually husband material all along 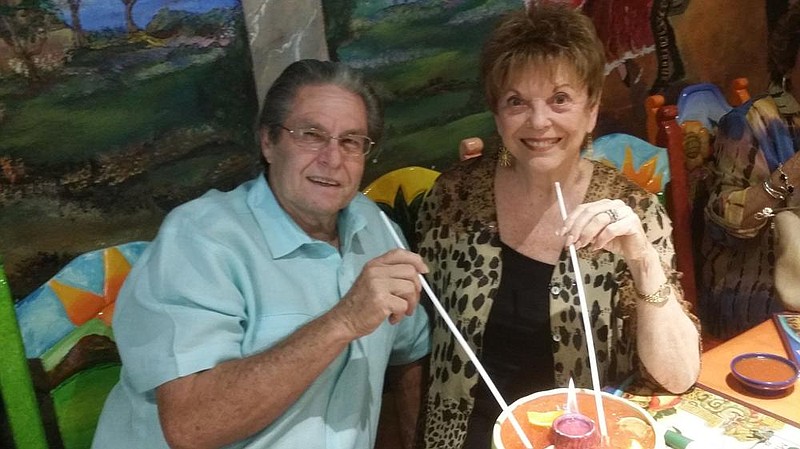 Bill and Pam Lafferty met at a pool party in 1974. He rode up on a chopper, long braid down his back, and she thought he was a bad boy. “I was always prim and proper,” Pam says. “In fact, my bad boy became a lieutenant in charge of volunteers at the police department down in San Diego.” (Special to the Democrat-Gazette)

Pamela Price thought Bill Lafferty was a bad boy who might be fun to hang around with for a while. She quickly discovered he only looked the part; he was actually good husband material.

Pam was co-hosting a pool party at the San Diego apartment complex she had just moved into in 1974. Her interest was instantly piqued when Bill, a friend of the other host, rolled up on his chopper, a long braid falling down his back.

"I always wanted to see what it was like to be with a bad boy," Pam says. "I was a straight-laced daughter of a college professor. I was always prim and proper. He just looked kind of mysterious."

That night after the party, she and Bill and Bill's brother went to the beach to look for grunion.

"Grunion running in California is really quite an exciting thing. It's when these little grunion fish come running up in the waves and they lay their eggs in the sand and they do it normally like around midnight, and it's a very rare occasion when it happens so people go crazy getting out there to watch the grunion run," she says. "Well, the grunion didn't run, and I didn't want another date because all he did was talk about his past life. He was boring."

Bill called Pam a couple of times after that, but she claimed she was busy. When she needed help moving some furniture, though, she called him.

He asked if he could bring something to drink and she suggested Chianti. He showed up with a six-pack of beer, replying that the liquor store never heard of Chianti. 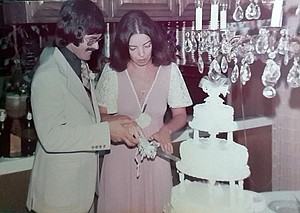 Bill Lafferty and Pam Price were married on July 26, 1975. Since they moved to Hot Springs 15 years ago, she served as volunteer coordinator at Garvan Gardens and he was volunteer of the year there. “We have met people and we just love life,” she says. “We’re very happy. We have had a storybook-type relationship. We’ve had ups and downs like everybody but there’s always been love.” (Special to the Democrat-Gazette)

Bill ended up not only moving furniture for Pam but painting a few walls as well.

"He just started to wear on me after a while. I found out this man could talk, he had a brain -- you couldn't tell unless you were around him in those days," she laughs. "I had it all wrong."

She had judged him based on his appearance, but Bill, who had divorced a couple of years earlier, was just living his best life at the time. He had recently left his job as a salesperson for a greeting card company and invested in a pet supply store.

"I looked like a biker," Bill says. "But I was not a bad boy as far as making havoc or anything like that."

His job, after all, didn't have a dress code.

"It was funny, and it took me it took me about three or four weeks of seeing him to understand what he was doing," Pam says.

He asked her to marry him several times, and each time she retorted, "You can't afford me."

About eight months after they started dating, Bill called Pam at the office where she worked as the assistant to the president of a marketing company, and asked her to meet him at the jewelry store on the lower level of her office building.

"I got down there and when I walked in they locked the door and the owner -- I knew the owner -- disappeared. Bill was standing at the counter," Pam says.

In front of him was a clay mock-up of an engagement ring with emeralds and diamonds, resembling a cocktail ring, which was the style she had told him she would like if she ever agreed to marry him.

"But I had told him no every time he asked," she reminds.

He proposed, again, in the store. Before she answered, she wanted to know if the ring was paid for. He said it was, and she repeated the question.

"The jeweler, from behind the screen -- and this was the most laughable, wonderful memory -- in a Jewish accent from New York, because that's where he was from, goes 'Yes, it's paid for. Say yes, say no ... I need to open my store!'" Pam says. "I just died laughing and I said, 'Yes, I'll marry you.'"

They exchanged their vows on July 26, 1975, in Pam's parents' San Diego condominium.

For their 20th anniversary, Bill and Pam renewed their vows, aboard their yacht in San Diego.

They moved to Hot Springs about 15 years ago, buying a home overlooking Lake Hamilton on impulse as they drove through on their way from San Diego to visit family in Kansas.

When he proposed the last time, Bill promised to replace the diamonds in the ring with larger ones, but Pam was skeptical that he would be able to do that.

"But he did. He put three very large diamonds on that ring and I still wear it," she says.

Bill no longer has his chopper but he does have an antique Jeep and a 1931 Ford roadster. They also have an RV, and they travel around the country together in it.

She says: “I thought, ‘What a hunk of man.’ And I had always wanted to go for a ride on the back of one of those dangerous motorcycles.”

He says: “I thought she was beautiful.”

She says: “We recorded our wedding and at the end you can hear me say, ‘I can’t believe I did this.’”

He says: “I was awed at the presence of her walking up the stairs for the ceremony.”

She says: “Be patient, be kind and stand up for yourself.”

He says: “Listen to one another and respect each other.”