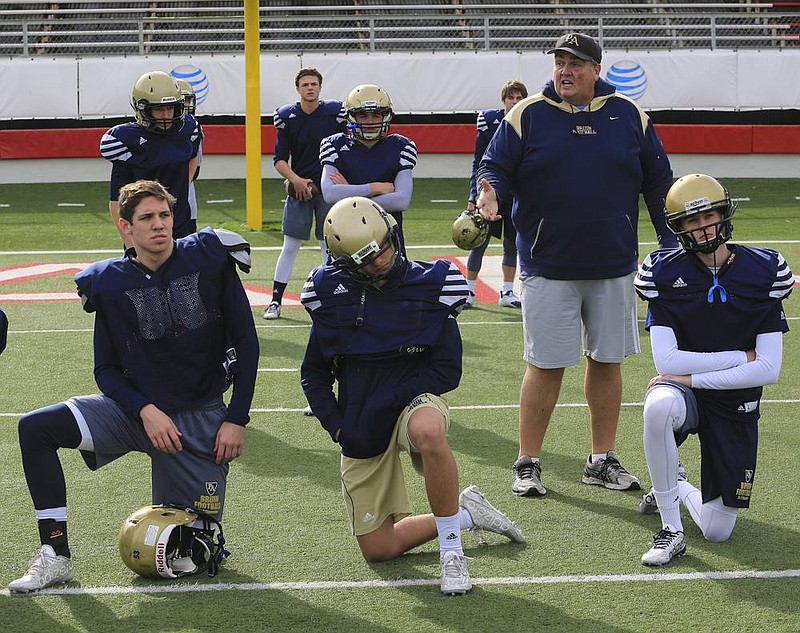 Todd Wood (second from right), shown here as Pulaski Academy’s defensive coordinator in 2015, is getting his first opportunity as a head coach at Heber Springs, which is coming off a 4-7 season. (Democrat-Gazette file photo)

Todd Wood has been one of the state's most respected assistant coaches in high school football.

This year, the longtime defensive coordinator at Pulaski Academy and Russellville is getting his opportunity to be a head coach at Heber Springs.

Wood was Pulaski Academy's defensive coordinator from 2002-16, helping the Bruins win six state championships, including three in a row from 2014-16 with Coach Kevin Kelley. He coached current University of Arkansas linebacker Hayden Henry, the 2016 Arkansas Democrat-Gazette All-Arkansas Preps Defensive Player of the Year, at Pulaski Academy.

From 2017-19, Wood was at Russellville on Jeff Weaver's staff as defensive coordinator. He accepted the Heber Springs position in January.

Wood, 54, is in his first head coaching position in football, but he feels like he's been prepared thanks to his experience working for Kelley and Weaver, along with Russellville offensive coordinator David Farr, who has head coaching experience at Maumelle.

"They've showed me the way," Wood said. "I worked with Coach Kelley for so long. His motto was, 'Expect the unexpected and do the unexpected.'

"I've worked for Jeff Weaver and David Farr. I've learned a lot from those guys. I wanted to take what they gave me."

Heber Springs is coming off a 4-7 season in which it earned the No. 5 seed from the 4A-2 Conference. The Panthers earned a playoff berth in the final week of the regular season with a 28-14 victory at Mills, but lost in the first round at Shiloh Christian 62-27.

Wood said the Panthers have 31 players participating in fall practice, which began Monday. Although he would like more numbers, he appreciates the team's effort thus far.

Heber Springs is scheduled to open the season Sept. 4 against Newport at home. Wood said he is preparing the Panthers as if they will have a game to play in early September.

"I tell our guys every day at practice, today may be the last time you put on that football uniform and go at it," Wood said. "For us, we plan to play a game Sept. 4. It's a privilege, not a right to put on that uniform.

"It's not up to me. It's up to people smarter than me. Whatever happens will happen. We'll be getting geared up to play."

North Little Rock Coach J.R. Eldridge has completed his staff for the 2020 season with the additions of Georgeio Milam and Brandon Marks.

Milam arrives at North Little Rock from Ashdown, where he was the offensive coordinator last season. He also has been an offensive line coach at Arkansas Tech University.

Marks played running back at Prescott and Ouachita Baptist University. He was an assistant coach at Fountain Lake before being hired by North Little Rock.

Earlier in the offseason, Eldridge brought his defensive coordinator Chris Kizer from Arkadelphia to serve in the same position at North Little Rock.

Star City believes the 2020 season could be a special one.

Chris Vereen is entering his third year at the 4A-8 Conference school and has led the Bulldogs to two consecutive Class 4A state playoff appearances.

The Bulldogs upset Southside Batesville in the first round last season, then fell to Pea Ridge 21-14 in the second round.

"It helped us tremendously," Vereen said. "You want to get better. These guys knew that we should have won that Pea Ridge game last year. It left us hungry."

Star City has 46 players in the program, Vereen said. The veteran coach who also has had stops at Gillett, De Queen and Hot Springs said that the first week of fall practice last week was "the best" he's had since November, citing the current coronavirus pandemic.

The Bulldogs also will have a new artificial turf and lights at Bulldog Stadium this fall. Vereen said the project cost $900,000, which was paid for with school and private funds. The field is still being installed, which Vereen said forced the cancellation of Star City's annual Blue-White game scheduled for Thursday.

"We feel that our stadium now will be as good, if not better, than the facilities around us," Vereen said.

Reed Mendoza said it's mostly been a smooth transition in his return to Lincoln as head coach after one year at Dover.

Mendoza was formerly the offensive coordinator and head baseball coach at Lincoln, so he'll be quite familiar with some of the athletes who'll play for the Wolves. But changes and disruptions brought on by coronavirus pandemic are still a challenge.

"The transition is about as smooth as it could be," Mendoza said. "Obviously, everything with the circumstances, we've had to be very adaptable. But that's not unique to us. That's been everybody. We try to take those things and turn them into a positive."

The Wolves have more than 40 players as they move from Class 4A to Class 3A because of reclassification. Mendoza said Lincoln has plenty of work to do before the season opener Aug. 28 against Elkins.

"Offensively, we need to work on our execution," Mendoza said. "On the defensive side, the focus is knowing our assignments and getting in the right place to make plays."

Bentonville planned to close out the first week of preseason drills with an hour-long scrimmage Saturday morning, but part of it had to be done inside the Tiger Athletic Complex after lightning entered the area.

Coach Jody Grant was pleased with how the Tigers performed on the first day high school teams could practice in full pads.

"It marked six straight days of practice, and I think our kids got after it," Grant said. "I think they were ready to go out and hit something besides a dummy, and I saw some good things out of it. It was nice to get out there and do it, even if the last 20-25 minutes had to be done inside. I was glad to see us get it in."

Grant said a number of players have caught his eye already. Donnie Thomas has performed well on the defensive line, as well as Zane Ochoa and Ethan Arnold in a rotation of players at outside linebacker.

Josh Ficklin and Johnny Pike, a pair of sophomores, have gained attention at running back as they perform behind the Tigers' experienced offensive line. Pike also could see time at linebacker, Grant said.

"Right now, we're just trying to smooth some things out and trying to develop some depth in some areas," Grant said. "I think we still need more time for some players to get reps in some positions, but we will try to clean up some minor mistakes in some areas. We'll grow, and we'll get better."