Something to bark about 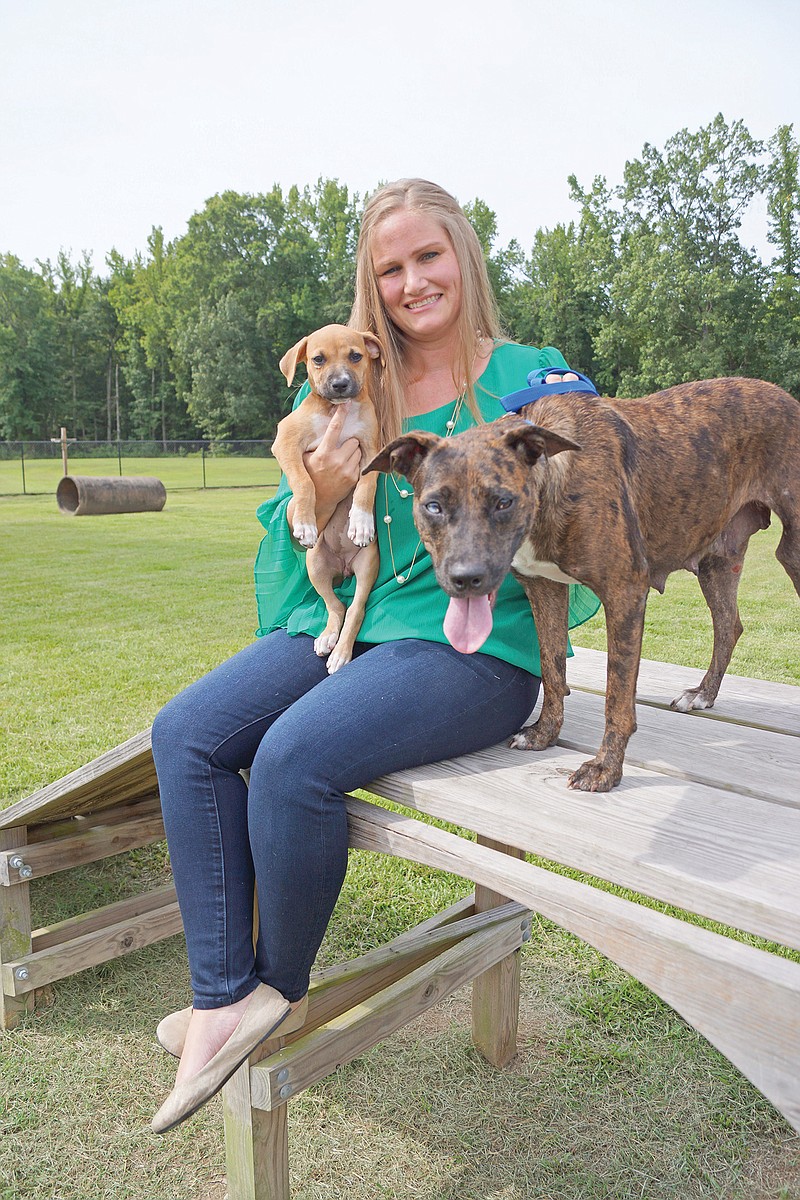 Brandy Buie was recently named the marketing and fundraising coordinator for Cabot Community Services, which encompasses the Peak Center, the Senior Citizen Center and Cabot Animal Support Services. Buie sits with momma dog Bonnie, right, and her baby Bunny. Both dogs are available for adoption. Mike Wheeler, director of community services for the city of Cabot, said Buie’s hiring is a great addition to the Cabot Animal Support Services team.

In 2007, when Brandy Buie and her husband moved to Cabot, they bought a house that was near the Cabot Animal Shelter. And every time she would sit outside, she could hear the dogs barking, and the sounds drew her to the shelter, she said.

“I decided to go over to the shelter and see if they needed volunteers, and from there, my passion grew,” she said. “I would literally spend hours in one kennel with the most scared dog that we had. I would just sit there on the floor and talk to it because that’s what those animals need. So I would pick out one that needed the extra attention. That’s what drew me in, and it lit a flame in me and became my passion quickly.”

“It was literally the dogs calling me …,” she said, joking. “I went over to see what was going on, and that’s what got me and kept me there.

“There are so many animals coming in on a daily basis that you never know what you are going to get, so it presents many challenges.”

Buie was recently named the marketing and fundraising coordinator for Cabot Community Services, which encompasses the Peak Center, the Senior Citizen Center and Cabot Animal Support Services. Her position is brand new, and Buie said she is excited for the opportunity to fill it.

“This new position is part of the new model for Cabot Animal Support Services,” Buie said. “In the past, the city has utilized the shelter for animals that were brought in, and we are trying to get away from the whole idea of the shelter being where you take your animals if you aren’t financially able to take care of them and, instead, [be a place that helps] provide the resources to keep pets within your family unit.

“I think we want the shelter to be more like emergency medical care or short-term animal care.”

In June, the city of Cabot was chosen as one of the 12 pilot cities for Human Animal Support Services, or HASS, in which more animals are kept in their homes and communities, reducing the number of pets entering the shelter system. Buie said that in the past, the Cabot Animal Shelter has had more than a 70 percent euthanasia rate.

“Now it is completely the opposite — it is such a great facility,” she said. “It has become leaps and bounds so different and has become a no-kill facility.”

Mike Wheeler, director of community services for the city of Cabot, said Buie’s hiring is a great addition to the Cabot Animal Support Services team in a different capacity.

“Brandy has been a volunteer for our animal shelter for more than 11 years, and bringing her on-board as a full-time employee will give her the time and ability to help in ways she has never been able to before,” Wheeler said. “Not only does she bring years of experience in marketing and fundraising in the world of animal welfare, but her compassion for the animals and people of the city of Cabot will make her a great asset to the city.

“As our role in animal welfare changes from ‘animal sheltering’ to ‘nurturing and promoting the human-and-animal bond,’” Brandy will assist in developing and implementing the marketing and fundraising necessary to make these progressive programs a reality.”

Buie said she will develop marketing and fundraising campaigns, as well as design and manage the organization’s website and social-media plans. She said she will also oversee some of the grant writing and donation programs, including corporate and individual donations, as well as documenting all events.

“A big part of it is going to be building relationships with current business owners in town and also the community,” she said. “So many times, the animal shelter in Cabot has had a negative connotation, and we want to change that perception.

“If you have a concern and come to us for help, we want to take away the judgmental side of it and make sure your pet is taken care of and provide the resources you need to provide proper care.”

She said this pilot program is a great opportunity for the community, considering Cabot’s size compared to some of the larger cities selected for the program. For more information on the Cabot Animal Shelter, call (501) 843-2021.

She said some pet owners may not have all the money in the world. They “might have all the love and just need a little bit of guidance to help with resources.”

Buie is originally from Macon, a small township outside of Jacksonville. She graduated from North Pulaski High School in 1998 and earned a bachelor’s degree in biology, with an emphasis in fisheries and wildlife management, from the University of Arkansas at Little Rock in 2004. She said she originally wanted to be a park ranger.

She was hired right out of college by the Arkansas Department of Parks and Tourism as a park interpreter for Withrow Springs in Northwest Arkansas but declined the job because her husband, Trent, had just been accepted at Arkansas Tech University in Russellville, and the couple had purchased a home. She and Trent have been married 18 years and have a 5-year-old daughter, Laikyn. The family also has three dogs and a mouse.

“We chose to move to Cabot because we had family and friends about 10 to 15 minutes from us, and it is a community that we wanted to raise children in, and it is very progressive,” Buie said.