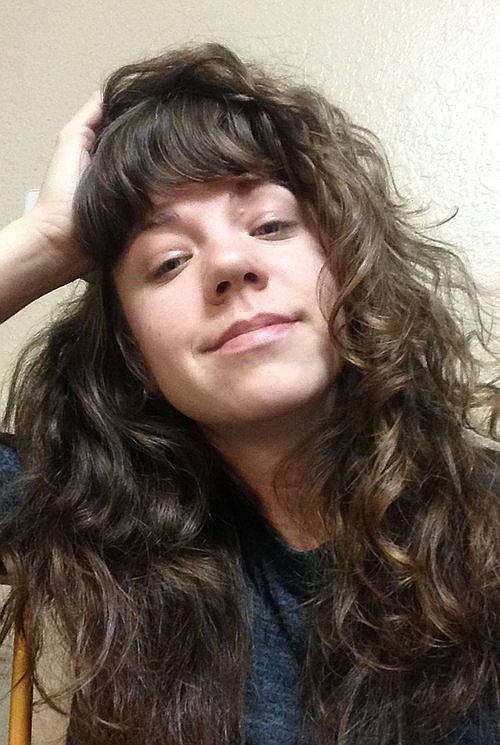 “I am interested in stories and in community. If I were just interested in stories, I would write novels. What sets me on fire is a group of people being in a room together and seeing what happens. I think modern society is undergoing a crisis of loneliness and alienation, and I believe theater is a way of combating that.” — Sarah Loucks

For the past three years, the University of Arkansas has produced the ArkType New Play Festival at the end of each school year -- a way to celebrate the work of the playwrights studying in the UA Department of Theatre's Master of Fine Arts program. Because covid-19 prevented this year's festival, What's Up! has been chatting this summer with the program's current students. This week, we're featuring playwright Sarah Loucks.

Loucks hails from Austin, where she's a member of the Austin physical theater ensemble Gale Theatre Company. Her work has earned multiple awards, including Best Non-Traditional Theatre from the Central Texas Excellence in Theatre Awards and Best Original Script from the Broadway World Austin Awards.

Q. What can you tell us about your bio as a playwright thus far?

A. I am originally from Iowa and spent the last six years making theater in Austin. When I moved to Fayetteville, I was planning on still being based in Austin part time, but the pandemic has really gotten in the way of that, so I feel more like I live in Arkansas. In Austin, I self-produce my own plays under the name MouthRadio. I've put up plays in theaters, warehouses, a parking lot and an abandoned restaurant. It was definitely scrappy, DIY theater. The advantage of working in that way is total freedom. It was a great opportunity to experiment in my own writing and in my collaborative practice. Coming to graduate school was about taking a break from the challenges of self-producing, of which there are many, and giving myself the chance to really focus on my writing, and only writing, for three years.

Q. What are you working on right now?

A. Right now I am revising a play titled "MOAB," which I had a workshop of in January at the University of Arkansas. In April of 2017, America dropped an MOAB, the largest non-nuclear bomb in the American military's arsenal, on a cave system in Afghanistan. There was a lot of controversy on the efficacy of the bomb in comparison to its cost, which was immense. Was it worth it? Was it necessary? These are all questions that apply to the entire war in Afghanistan, too. So the play is about these four soldiers who hike up this mountain in Afghanistan to film the MOAB exploding. And the entire play is about them waiting for this bomb to blow up. And as they wait, they start to confront what it means for them to be in the military on a personal level.

Q. Why are you attracted to playwriting?

A. I am interested in stories and in community. If I were just interested in stories, I would write novels. What sets me on fire is a group of people being in a room together and seeing what happens. I think modern society is undergoing a crisis of loneliness and alienation, and I believe theater is a way of combating that.

Q. What is the most difficult scene you've ever written?

A. I wrote "MOAB" in collaboration with my ex-boyfriend, who is a veteran, so like, the whole thing was hard. There were a few writing sessions where we had to take a lot of crying breaks. But overall, it was really positive because writing the play forced us to process the way the military affected him, and the way it affected me by proxy, in a way that was really cathartic.

Q. Do you think the current global pandemic will have a lasting effect on the art of theater and, if so, what effect do you predict it will have?

A. I hope that the pandemic and also the justice for Black lives movement will force theaters to completely upend their leadership and curatorial practices. Theater historically is a racist and classist institution. While the pandemic has put our work on pause, I hope that we can use this time to work towards making theater a just institution that represents the world we live in, rather than the world that just white upper-middle class people occupy.

Q. Do you have any advice for budding playwrights?

A. I am still a budding playwright, so I don't feel capable of giving advice. I also frequently make very terrible decisions, so I am really not to be trusted. I could maybe give advice to a 22-year-old, but it would be something completely irresponsible, like buy a car for $700 dollars and drive to California, which is what I did when I was 22. Other things that I can recommend are reading everything you can, investing deeply in your collaborators, and not taking anyone's advice except maybe your mom's.

Follow Sarah Loucks and her upcoming projects at sarahloucks.space.