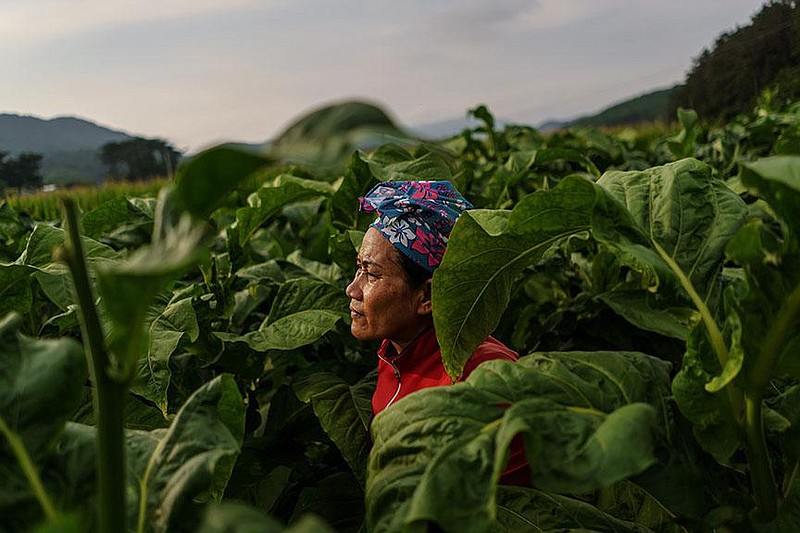 A Thai migrant, one of many who have come to be known in Thai as the phi noi, or “little ghost,” picks tobacco leaves on a farm in Bokheung-Myeon, South Korea, in early July. (Los Angeles Times/Marcus Yam)

He was in his third hour of picking tobacco, beginning shortly after dawn at the foot of a mountain in a sleepy South Korean town. Weaving between rows lining the gentle slope, he stooped to snap off the ripe, yellow-tinged leaves from plants as tall as he.

Nearby, Park Jong-bum took a break from heaving bales of tobacco onto a truck bed. He lit a cigarette beneath a cloudy sky. He had quit smoking last year, but the stresses of running a farm had hooked him again.

Park and Phonsrikaew were on the second chapters of their lives: Phonsrikaew, a 52-year-old Thai army captain-turned-migrant farmworker, and Park, 49, a South Korean businessman who returned to his native farming village after two decades of city life.

On this day, their lives would intersect in the crosscurrents of supply and demand in South Korea's agricultural industry: an aging, hyper-urbanized society in voracious need of farmhands, and migrant workers arriving from elsewhere in Asia to take on arduous work no longer wanted by locals.

This already tenuous balance is imperiled by a global pandemic that has sealed borders and interrupted the flow of migrant workers, leaving farmers and farmworkers desperate as crops ripen and rains loom. On this day, Park needed 10 workers to pick leaves from some 18,000 plants. He got five, including Phonsrikaew.

For 12 hours, they'll work alongside one another on one of the hottest days of the year. Then each will move on, not having learned one another's names or life stories, probably never to see one another again.

Phonsrikaew, his wife and three other migrant workers from Thailand working in Park's fields are what's come to be known in Thai as the phi noi, or "little ghost" -- people entering South Korea in growing numbers on tourist or other visas and disappearing into rural and industrial corners for tough jobs with the promise of pay much higher than what they could earn at home.

Until the pandemic, they were largely unacknowledged, except in occasional reports about the mistreatment and exploitation of migrant workers and half-hearted debates about immigration at a time when fast-falling birthrates are eroding South Korea's population.

With half of the population concentrated in the capital of Seoul and the surrounding metropolitan area, most South Koreans live without encountering the reality that the nation's workforce is increasingly made up of migrant workers. That's especially true in agricultural areas, where farmers say the vast majority of work is done by migrants, legal and otherwise. Agricultural and forestry production accounts for 2% of South Korea's gross domestic product, less than half of what it was 20 years ago.

Even so, recent changes by the government to its immigration policy do little to address that shortage and instead echo the Trump administration's priorities in the United States. In July, the country announced a point system for evaluating foreigners for resident visas to attract those with "superior talent," favoring applicants with higher education, income levels and Korean language ability.

From the U.S. and Canada to Western Europe and parts of Asia, agriculture in developed nations is dependent on migrant farmworkers who arrive from poorer nations to pick berries, prune asparagus or till the fields. The coronavirus outbreak has underscored that reliance, leaving farmers and governments scrambling for stopgap measures.

In South Korea this year, farms had requested more than 5,000 seasonal migrant workers through a government program. To date, not one has been able to enter the country because of coronavirus-related restrictions.

Phonsrikaew, who has been in South Korea for about three years, considered joining the flow of thousands of workers returning to their home countries at the height of South Korea's outbreak earlier this year. But he had yet to earn enough to cover the debt that pushed him to look toward becoming a migrant worker in the first place: 1 million baht, or about $30,000, borrowed to purchase a Ford Ranger pickup his wife needed for her catering business.

"The income here is good, but the hours I work are pretty long," Phonsrikaew, who like many of the workers speaks barely any Korean, said through an interpreter. "Any work I can do, I do."

Workers who left haven't been able to return because of closed borders, canceled flights and heightened immigration scrutiny. That shortage has been an unanticipated boon for the likes of Phonsrikaew, who have seen their day rates grow by about 20% to 30% over last year.

For 11.5 hours of work on this hot, humid July day, with an hour for lunch and two 15-minute breaks, Phonsrikaew would be making a little more than $80. A cut would go to the informal broker who'd found him the work; the same man who picked him and other workers up from a nearby town and drove them out to farms.

Even if it paid less than the construction work he did in his early days in Korea, working in tobacco fields was peaceful, even enjoyable, Phonsrikaew said.

It may be his first year running a farm, but Park knew well the smells, perils and rhythms of the fields.

His parents farmed tobacco in his hometown of Bokheung-myeon, decades before there was any migrant labor. The solution then was having as many children as you could. Park's parents had seven; as his siblings did before him, Park, the fifth child, began working in the fields when he was 8.

As most did in fast-industrializing South Korea, Park studied and worked hard to escape farm life. He got as far as the city of Cheonan, about 100 miles north, where he built a business importing used textile machinery. But the country's once-thriving textile industry was undone by cheaper labor and lower costs in China and Southeast Asia. Park folded his company.

By the time he persuaded his wife, an art major who was raised in the city, to move back to the farm, he found a much-altered landscape. Farmers were scaling up to plant more labor-intensive cash crops even as the population dwindled and young workers were scarce. Enrollment at Bokheung middle school, Park's alma mater, has plummeted from 800 when he attended to 34 today.

"I grew up thinking, if I get out of here, I'm never coming back," he said. "In the city, it's mayhem because there aren't any jobs. In the country, if you're willing, there's work 365 days of the year."

For workers to harvest leaves from his four acres of tobacco, Park turned to a tree farmer who connects day laborers with employers on the side. The workers were dropped off shortly after daybreak at his orange-roofed cattle shed.

Park, his wife and a friend worked alongside the Thai migrant workers in the day's stifling heat.

The tobacco, Park was hoping, would fare better than his blackberries -- he lost about a fifth of the crop because he couldn't get the workers to harvest them in time.

Park's woes are shared by farmers across South Korea. In Yeongyang County, about 200 miles northeast of Park's village, fields of lettuce and peppers hang in the balance.

County officials there had struck an agreement with a village in Vietnam for 380 workers to come for the season. They found a nearby hot springs where the workers could quarantine for the 14-day period required of everyone entering the country, the cost footed by the local government and farmers.

The workers were supposed to arrive by the end of July, but their fate remains in limbo because of the unavailability of return flights for the workers after their 90-day stay, according to the Ministry of Justice.

The pressing needs by farmers and laborers have led to daunting journeys. Between April and June, South Korean authorities found three small recreational boats washed up on the west coast, left behind by people from China's Shandong Peninsula who crossed more than 200 miles of open water. South Korean police said it was an unprecedented method of illegal immigration.

When police tracked the men and women down days later, some were picking onions down south. Others were working on napa cabbage out east.

"They essentially risked their lives to come here," said Lee Seong-il, a press official for the Taean Coast Guard. Lee said one of them told him he was a single father with an aging mother to support. "They came because it was a matter of survival."

Other local governments have tried recruiting city dwellers left jobless by the pandemic. But farmers complained they worked slower and weren't eager to return to the fields.

"The housing and all the insects, a lot of them seemed to find it unbearable," said Shin Seong-jae, who grows cucumbers, squash and rice in Gangwon province in the eastern part of South Korea.

By day's end, Park, Phonsrikaew and the others were at the sixth of the 10 fields.

The sunlight was waning, the air cooler on Park's fields. His face was flushed as he carried bales of overgrown leaves on his shoulder. But the work was far from finished.

The remaining plants Park and his wife would have to pick the next day. When time came for the next round of picking in about a week, he'd go looking to hire another crew of day workers, competing with desperate farmers just like him.

At 6 p.m., the van arrived to shuttle the workers away. They peeled off gloves, hats and bandannas and wiped off beads of sweat. Handshakes, pats on the shoulder and nods of the head acknowledged the day's work in lieu of words. The little ghosts then piled into the van and disappeared beyond the horizon.