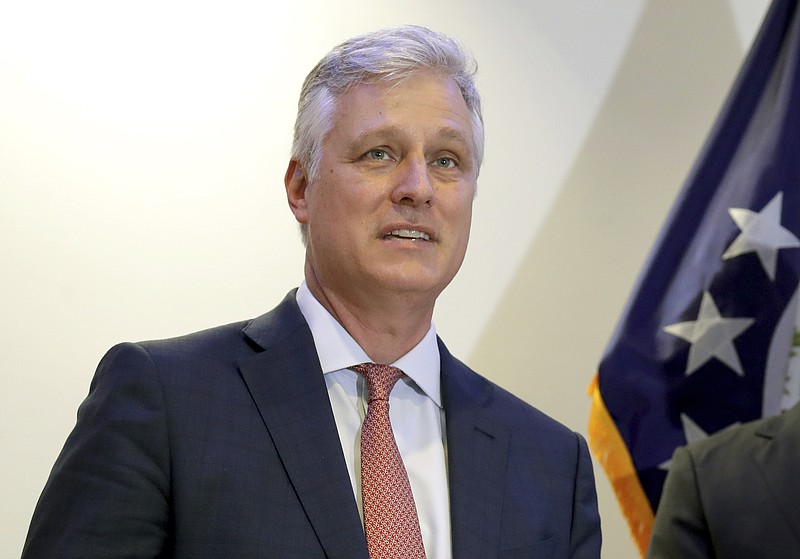 FILE - In this Jan. 20, 2020, file photo, national security adviser Robert O'Brien addresses media during a news conference in Berlin. O'Brien said he's seen no intelligence indicating that Russia is doing anything to try to help get the president re-elected. O'Brien's comments were released Saturday, Feb. 22, in a transcript of an interview with ABC's &#x201c;This Week with George Stephanopoulos&quot; set to air on Sunday. (AP Photo/Michael Sohn, File)

"Whether it's China or Russia or Iran, we're not going to put up with it," O'Brien said on CBS' "Face the Nation."

A report by U.S. intelligence agencies Friday said Russia would prefer that Trump win reelection while China and Iran would like to see him lose. Asked about the possibility of U.S. adversaries skewing the result, O'Brien said the Trump administration will be even-handed in ensuring a free and fair election.

He declined to say whether Trump told Russian President Vladimir Putin during a July 23 conversation to refrain from meddling in the election, saying he doesn't get involved in the president's conversations with foreign leaders.

While O'Brien didn't spell out specific consequences, he cited previous economic and diplomatic sanctions the administration has imposed on Russia. "There's not a lot left we can do with the Russians" in terms of sanctions, he said.

Last week's summary from William Evanina, director of the National Counterintelligence and Security Center, attributed the most active role to Russia, which sought to help Trump win election in 2016. This time, it said, Russia is "using a range of measures to primarily denigrate former Vice President Biden."

The report said Iran is likely to focus on "spreading disinformation on social media" as it "seeks to undermine U.S. democratic institutions, President Trump and to divide the country."

And it said China, which sees Trump as "unpredictable," has grown "increasingly critical" in its "public rhetoric."

Meanwhile, House Speaker Nancy Pelosi said Sunday that the threats of election interference from Russia and China are not equal, pointing to a more serious risk with Moscow's efforts to boost Trump's reelection bid.

"They're not equivalent," Pelosi, D-Calif., said in remarks on CNN's "State of the Union" and "Fox News Sunday."

"Russia is actively 24/7 interfering in our election," Pelosi said. "They did so in 2016, and they are doing so now." She urged intelligence agencies to "put more information out there" on the specific nature of the threats.

Pelosi said trying to equate China and Russia on the threat of foreign election interference doesn't tell the story.

"The Chinese, they said, prefer Biden -- we don't know that, but that's what they're saying, but they're not really getting involved in the presidential election," she said.

Pelosi and other congressional Democrats have expressed concern that intelligence agencies have been withholding from the public specific intelligence information about the threat of foreign interference in American politics.

"The facts are chilling," Sen. Richard Blumenthal, D-Conn., wrote in an op-ed published Friday evening in The Washington Post. "I believe the American public needs and deserves to know them. The information should be declassified immediately."

Information for this article was contributed by Tony Czuczka of Bloomberg News and by staff members of The Associated Press.