Marker's destroyer is back in custody; incidents noted at State Hospital 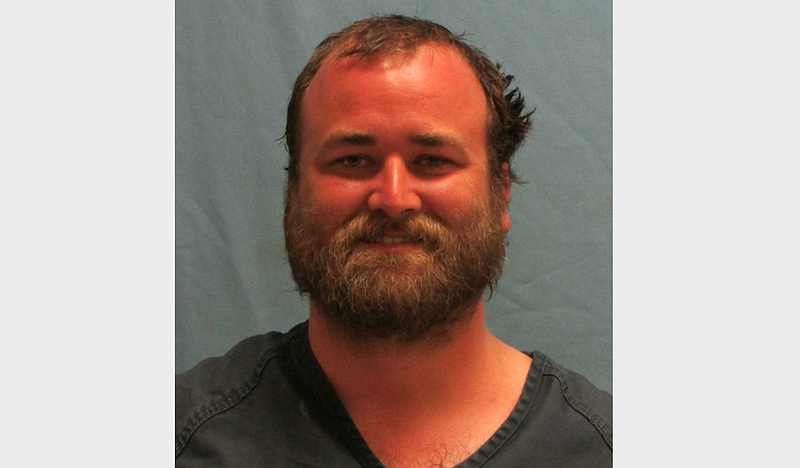 Michael Tate Reed II, the man who destroyed the original Ten Commandments monument at the Capitol three years ago, is in the Arkansas State Hospital in Little Rock for the third time and facing new charges based on accusations of vandalism at the mental institution and of spitting in a doctor's face there.

A video-streaming Reed crashed his car into the 6-foot marker less than a day after the 6,000- pound granite piece was unveiled at a public ceremony in June 2017 on the southwest grounds near the Supreme Court.

Capitol Police, too far away to prevent the crash, witnessed the pre-dawn destruction and arrested Reed, now 35, while he was still behind the wheel of his demolished black 2016 Dodge Dart. The impact knocked the marker over, breaking it into three pieces and numerous shards, and damaged its concrete base.

Reed, who had arrived from Van Buren, spent the next 11 months in lockup, both in jail and in the institution, before being cleared of wrongdoing on mental health grounds. That was the same conclusion Oklahoma authorities had reached after Reed similarly destroyed that state's public Ten Commandments monument, a twin to the Arkansas marker, in October 2014. Both were replicas of a marker at the Texas Capitol.

A replacement monument was returned to the Arkansas Capitol in April 2018. A duplicate of the original, the marker differs from its predecessor in that its 8-square-foot base is shielded by four 6-foot concrete bollards, each weighing about 150 pounds and embedded 3 feet into the ground so they appear to be about hip-high.

The pillars are cream-colored to match similar protections around the Capitol monument to the Little Rock Nine of Central High School's 1957 desegregation crisis. Placed about 5 feet apart, the bollards are close enough that a car can't pass through, designers say.

A trial for a federal lawsuit disputing the legality of placing the marker on state property is pending, delayed because of the pandemic.

The criminal proceedings against Reed ended barely a month after the new marker was installed, with the court finding that he was innocent by reason of mental illness in May 2018. The ruling was based on medical findings of bipolar disorder and an agreement between prosecutors and the defense.

That verdict resulted in Reed being bound over to the custody of the Arkansas Department of Human Services, which runs the State Hospital. The law keeps Reed under the agency's authority indefinitely, unless he can go for five years under supervised release from the hospital without serious incident.

After another month in the State Hospital, with doctors reporting that Reed was responding well to treatment and that his symptoms had abated, he was released from the hospital in July 2018 to live with his mother in Alma as part of a court-supervised release program where he was monitored while receiving outpatient treatment.

In Crawford County, Reed did so well in the treatment program, which included three days of therapy every week, that by the end of August 2018, his service provider recommended that he be moved to a less intensive program, according to reports from his treatment monitor filed with the court.

Within a week, Reed's behavior at the facility resulted in him eventually being arrested twice, first in January 2019 on misdemeanor charges, and then again late last month after State Hospital police swore out an arrest warrant on July 28.

Those new charges are misdemeanor harassment and two counts of felony criminal mischief. Reed is scheduled to be arraigned on those charges on Sept. 1 in Pulaski County District Court.

The charges, which together carry a potential 20-year prison sentence, are based on incidents at the State Hospital about six days apart in November 2018, according to court records and State Hospital Police reports. His physician, Dr. John Casey, has attested to authorities that Reed was not insane during these incidents.

The first was on Nov. 14, 2018, five days after Reed was returned to the State Hospital for the first time. He tore up the Unit A "comfort room" because he wanted to "harm himself" after accidentally being locked in the room, the documents say.

Reed had been placed in the room to listen to Christian music on the radio, and the door had been closed, for Reed to enjoy the music, by a new staff member who didn't know how the room worked.

Six days later, Reed destroyed a computer at the nurses station in a late-night confrontation with a nurse and police, documents say.

Reed got upset after he had asked for saltwater for a sore throat but was denied, the documents say. The nurse said she could not give him any because that would be considered a treatment, which can only be given on a doctor's order.

The nurse offered Reed a sleeping aid instead, which he refused. Documents show staff members tried to calm the agitated Reed, but he jumped into the nurses station and destroyed a computer before throwing up his hands and surrendering to police, saying, "I'm done."

A little more than 17 hours later, police were called to the Unit A dining hall to intercede in a confrontation between Reed and his physician after Reed had thrown water in the doctor's face and spit in the eye of Dr. Lindsey Wilbanks-Woodruff, one of the doctors whose diagnosis contributed to the ruling that he was not fit for trial, documents say.

Reed claimed at the time to have HIV, although there's no documentation in any of his court files to support that. The incident was recorded by security cameras.

Reed has already been prosecuted for some of his other acts at the State Hospital around that same time, with court records showing he pleaded guilty to misdemeanor criminal mischief and three counts of disorderly conduct in February 2019, about six weeks after his first arrest, and received a sentence of time served.

According to police reports and court records, on Nov. 19, 2018, Reed threw soap and water on a hospital worker and a nurse after the nurse refused to give him more medication than he was allowed.

The following day, the same day he's accused of spitting on the doctor, police summoned by an emergency alarm found nurses restraining Reed after he had gotten into the nurses station and tore up a computer and electrical wiring, causing about $500 in damage.

Records also describe instances of destructive, self-harming and combative behavior by Reed that did not result in criminal charges.

A few days after Thanksgiving 2018, his court monitor received a report from the hospital of Reed "provoking peers all morning using racial slurs, yell at a [developmentally delayed] patient, stripping naked in the hallway and threatening" hospital staff. He also threw his medication on the floor, saying, "I like playing psychotic."

In mid-February 2019, Reed asked nurses for a zip tie, saying he needed it to tighten his pants. Instead he wrapped it around part of his genitals, saying, "I have sex a lot and don't want kids, so I decided to take care of it myself," records say. Reed would not remove the tie voluntarily and had to be restrained so a nurse could cut it off, according to the records.

Five months later, however, doctors were considering having him returned to his mother's supervision.

But within a couple of weeks, Reed tried to attack a female patient and then a hospital worker and had to be restrained.

Several hours later, he began following a nurse around and touching the man inappropriately, according to the records. Warned by an officer to stop the touching, Reed became aggressive, and the staff had to call for more police. Efforts to calm Reed failed, and when he was told he was going to be sedated, Reed kneed the nurse in the groin before he could be restrained, records show.

The next day, Reed assaulted the female patient, bruising her shoulder, spitting in her face and threatening her, after he had been asked to leave her alone. He also assaulted a worker who arrived to help the woman.

"Mr. Reed's medications had just been reduced, and it is suspected that this was the reason for this change in behavior," a court report stated. "Medication adjustments are being made to improve behavioral control."

At the end of September 2019, he was returned to his mother's home at the recommendation of doctors, with plans for him to receive treatment at a Fort Smith counseling center.

Sebastian County jail records show Reed, weighing 292 pounds and standing 6-feet, 2-inches tall, spent a week in jail after his Jan. 2 arrest by Fort Smith police on a disorderly conduct charge, which is roughly equivalent in severity to a speeding ticket.

Reed would encounter police again about 3½ months later, in mid-April, when officers took him to the Mercy Hospital emergency room in Fort Smith after he demonstrated aggressive and manic behavior in an assault on two family members, the records show. Reed refused to be admitted to the hospital and ran away, disappearing until he was arrested three days later by police in Barling, which is about 4 miles southeast of the hospital.

His court monitor had Reed arrested so he could be returned to the State Hospital, with the staff at the facility where he was being held describing Reed as "aggressive, provocative and threatening ... requiring multiple staff members to monitor his behavior in an effort to keep himself and other residents safe."

Reed was returned to the State Hospital on April 24, where he's been held since, with no significant incidents reported in that time.