GAME ON: Drift gently along the high seas with your ‘Raft,’ your pals — and sharks 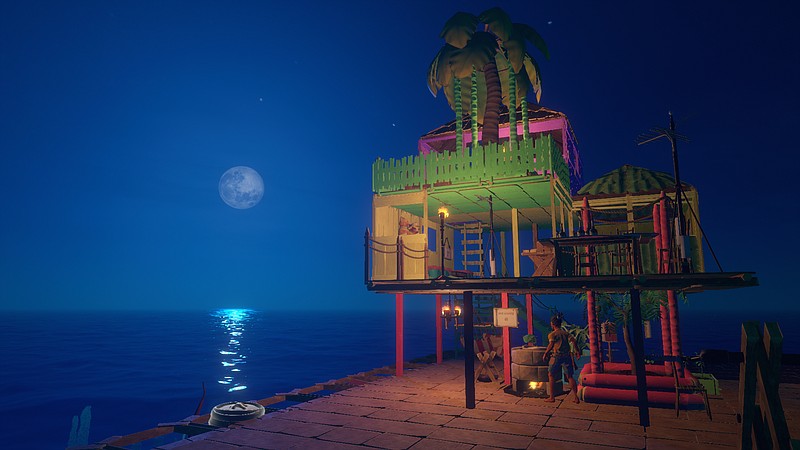 "Raft" is a video game in which you drift the high seas while defending yourself from a shark and collecting flotsam to fancy up your raft. (Photo courtesy Redbeet Interactive)

Here to trigger everyone's thalassophobia, or fear of the sea, is the open-water survival and crafting game "Raft."

"Raft" is fairly simple. You start out on a two-by-two section of raft with nothing but the wood beneath your feet and a makeshift grappling hook. Around you is the wide-open ocean and a neverending stream of flotsam and jetsam that drifts your way (or are you drifting into it? The mind wonders).

Players throw the hook and snag nearby debris, collecting wood, plastic, vines and more to stay alive and expand the raft.

Players must manage their hunger and thirst as they collect resources to maintain and upgrade the raft.

But beware about simply jumping off the raft and swimming over to resources to collect them — a hungry shark stalks the raft, and attacks the boat frequently, destroying sections — unless driven off.

Alone on the ocean, in a raft, with a great white shark circling? Cue the "Jaws" music.

It sounds terrifying, but "Raft" is also quite calming and wholesome. Each day brings a set of tasks required to survive until the next dawn.

Seawater must be purified. Food, such as herring caught with a fishing pole, or potatoes found in drifting barrels, must be grilled. Every few minutes, the shark attacks a section of the raft and must be fought off.

The game does get deeper and more complex, however. As you drift along, you'll notice the occasional island pop into view on the horizon. Collect enough resources, and a sail and anchor can be built, allowing for a temporary stopover to harvest rare resources, such as seeds and fruits.

The true reward of islands, though, lies beneath the water, where seaweed and deposits of ores can be found -- provided you've found a way to distract the maneater that's still hunting you.

There's an actual storyline, too, although it doesn't begin until the player has acquired enough technology and resources to craft a radio receiver and three antennas.

"Raft" is currently in Early Access on Steam, although it has been there for a while. The first chapter of the story, in which players will start to uncover why the world is covered in water, was released late last year, and the second chapter is due to come out this fall. Once the storyline is unlocked, the player will encounter special named islands that offer unique resources and blueprints.

Players can advance fairly significantly, technology-wise. Early on, jabbing the shark with a sharp stick is the best you can do as your tiny home floats along a current. Eventually, players can acquire a steering wheel, biofuels and engines. Automatic collection nets will snag floating debris as it goes past, and players can smelt ore, grow crops and trees and even raise livestock on the raft.

Not to be forgotten is that "Raft" is also a multiplayer-capable game. Join friends on Steam or invite new pals found through the game's official Discord server, and players can drift the high seas in good company.

The more players that join a game, the more the materials that will spawn to be collected. But multiple sharks can also spawn, which can make some parts of the game more challenging. Also, more players mean more mouths to feed.

Interestingly, there's no limit to how many friends can join your game, nor how big the raft can become. It's limited only by the computing power of your PC, although I wouldn't recommend more than two to four players.

There are quite a few crafting options for raft expansion, too — it doesn't have to be flat. You can have ladders and stairs, so feel free to turn your raft into a houseboat with many stories.

"Raft" comes with four difficulty modes — Peaceful, Easy, Hard and Creative. In the first three, the difficulty slowly increases, with hunger and thirst draining more quickly and sharks re-spawning faster (yes, you can kill the shark and harvest its meat, but after a few minutes, another will appear).

In Creative mode, players have unlimited supplies and health, so they don't have to gather any materials, research blueprints or worry about survival, and can instead just have fun building the raft of their dreams.

Hard mode has an additional difficulty modifier that makes it really suitable only for confident solo players, or in multiplayer mode — players who die cannot re-spawn on their own. Another player will need to grab the body and drag it to a bed to be brought back into the game. Up to five sharks can spawn at a time.

"Raft" is developed by a small Swedish studio of just eight people and originally was a student project. It has been a lot of fun to play. 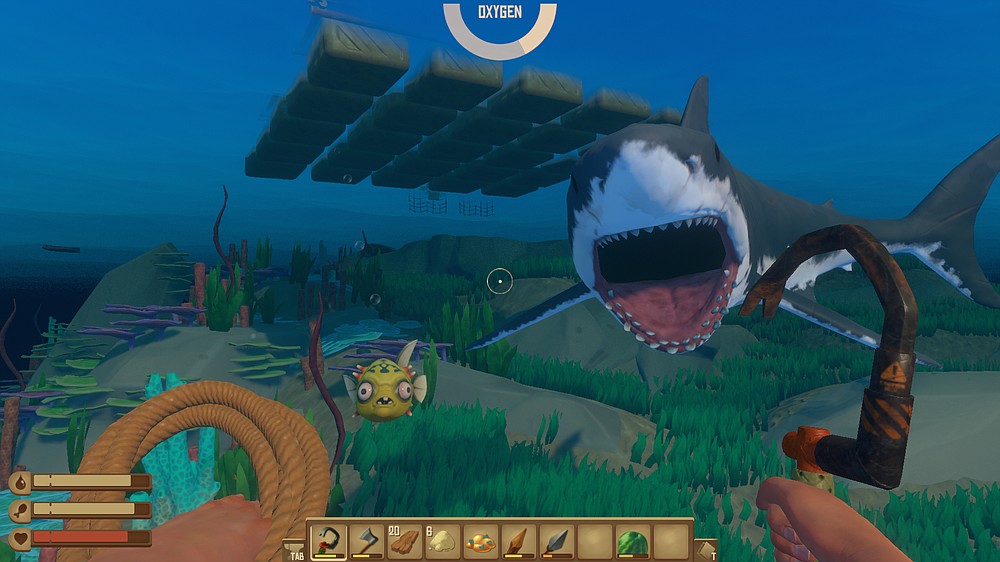 "Raft" is a video game in which you drift the high seas while defending yourself from a shark and collecting flotsam to fancy up your raft. (Photo courtesy Redbeet Interactive)
ADVERTISEMENT