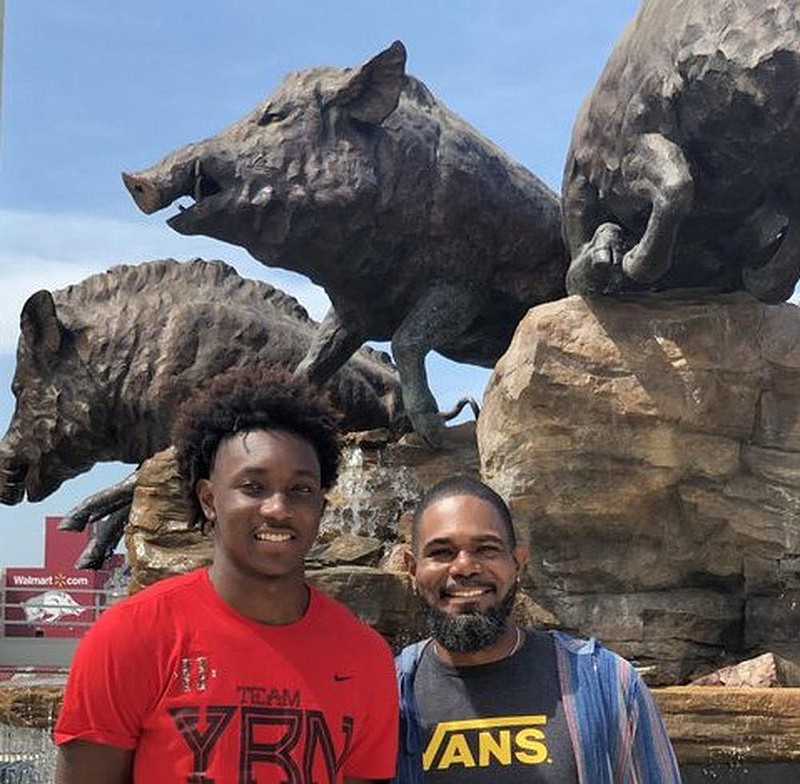 Chance Moore (left), pictured with his father John, said it was during their two-day visit to Fayetteville over the weekend that he made up his mind about committing to play basketball for Arkansas. (Photo courtesy Chance Moore)

According to the Merriam-Webster dictionary, part of the definition of friendly is showing kindly interest and goodwill; cheerful, comforting.

Fayetteville was exactly that to 2021 University of Arkansas basketball commitment Chance Moore and his father John during their two-day visit to the city over the weekend.

Because the NCAA implemented a dead period March 13, Moore wasn't able to make an official or unofficial visit to Arkansas that would allow them to interact with the coaches or tour the facilities and campus.

He and his father arrived about 10 a.m. Saturday to look at the campus and city. They knew he likely would pledge to the Hogs without having the chance to visit and talk with the staff.

"I pretty much had my mind set," Moore said.

A few hours later, he announced his commitment at 3:48 p.m.

"It was after we ate lunch, we got back to the hotel, that's pretty much when I made up my mind that I wanted to commit," Moore said.

The elder Moore echoed what his son said about the friendliness of Fayetteville.

"We went to a store, we went to a little cookie shop and some other places, and everybody was just like super friendly," John Moore said. "So that made us feel comfortable that this is a place that's a friendly place."

Moore praised the recruiting efforts of Musselman, associate head coach David Patrick and assistant Corey Williams after a scholarship offer was extended May 29.

"Coach Williams is pretty good friends with one of Chance's high school coaches, so we had done a lot of vetting of Arkansas and their program prior to getting there," John Moore said. "I also have a good friend of mine -- and I won't name his name because he's affiliated with another school -- that played basketball for Coach Muss, and we vetted Coach Muss and his coaching style through him."

Father and son visited LSU, Georgia, Georgia Tech and Florida State before the coronavirus pandemic. Moore and his mother Julie Fincher visited Alabama. She also accompanied them on the trip to Georgia.

Moore's father expected the Arkansas campus to be nice, but he desired a welcoming environment for his son.

"As a parent, I wanted to make sure he was going to be in an environment that was going to be accepting of him as an African- American boy," Moore said. "That he wasn't going to have any issues in that regard, so when we got down there everybody was warm and welcoming, that kind of checked that box off because all the other boxes had been checked."

While out for dinner Saturday night, a Razorback fan recognized Chance.

"One guy knew who I was and I had committed," Chance Moore said. "He was like, 'Congratulations. Thank you for committing to Arkansas.' "

John Moore, a plaintiff litigation lawyer in the Atlanta area, said he and Chance rented scooters to tour the campus and city on Sunday before flying out about 5 p.m.

"It's a gorgeous campus," John Moore said. "Not a lot of students were there, but it was fun to kind of scoot around, and we tried to kind of conceptualize what it would be like going from where he might be staying, to class, to where the basketball facility is. He wants to study business, so we scooted around the business school."

The visit gave John Moore peace of mind about his son moving about 700 miles away from home.

"My mom has a good friend that's an associate general counsel at Walmart, and he said that Fayetteville was a nice and warm place, but we still wanted to ... for me it was important enough that I was going to spend my money to go down there to see it for myself," he said.