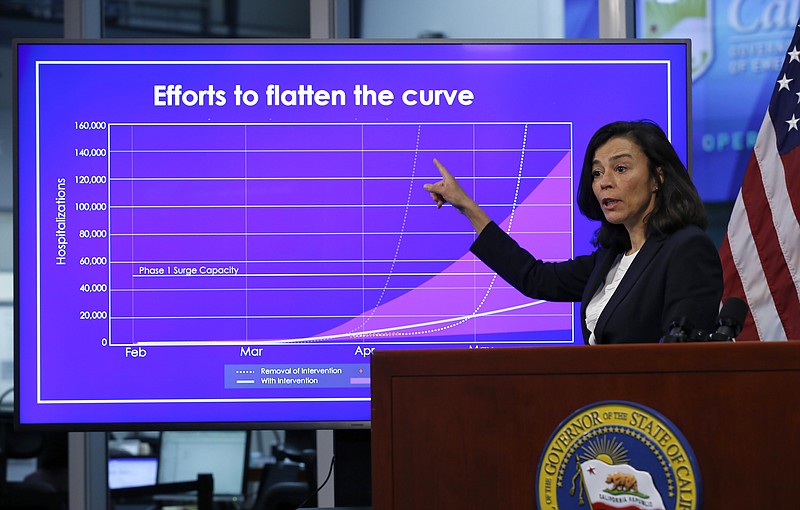 FILE - In this April 14, 2020 file photo, Dr. Sonia Angell, director of the California Department of Public Health discusses the state's efforts concerning the coronavirus during a news conference at the Governor's Office of Emergency Services in Rancho Cordova, Calif. Angell announced she was departing from her role as director and state public health officer for the California Department of Public Health in a letter to staff that was released Sunday, August 9, 2020.

More than 97,000 U.S. children tested positive for the coronavirus in the last two weeks of July, more than a quarter of the total number of children diagnosed nationwide since March, according to data from the American Academy of Pediatrics and the Children's Hospital Association.

The report cited data from 49 states, New York City, Washington, Puerto Rico and Guam, most of which defined children as younger than 19 years old.

Additionally, a review by Kaiser Health News service and The Associated Press found that dozens of state and local public health leaders around the U.S. have resigned or have been fired amid the coronavirus outbreak.

As of July 30, there were 338,982 cases reported in children since the pandemic began. Still, that was a relatively small fraction of the total number of coronavirus cases nationally -- 8.8%. As of April 14, children made up just 2% of cases nationwide, according to the data.

"It will be a little hard to sort out the degree to which a lot more kids are getting infected and the degree to which our testing capacity has gone up," said Sean O'Leary, a member of the American Academy of Pediatrics and professor of pediatric infectious diseases at the University of Colorado. "What we can say is that it's not particularly surprising given the large increase in cases we've seen nationally overall."

The jump in pediatric cases comes as children are entering close quarters for the first time in months as some schools open their doors to students again. For months, teachers, parents and politicians have argued over whether the risks that the novel coronavirus pose to children outweigh the benefits of in-person learning.

Many school districts have chosen to operate entirely remotely until case numbers drop. Some have opted for hybrid learning systems in which children attend school in-person only a few days a week to limit crowding. But even schools with measures limiting crowds have suffered outbreaks already.

North Paulding High School, near Atlanta, made news last week when pictures spread on social media of students crowded in hallways and not wearing masks. Sunday, the school sent a letter to parents announcing the campus would be closed to in-person learning for at least two days after nine people tested positive for the virus.

O'Leary cautioned that part of the jump in cases could merely be the result of an increase in testing. Early in the pandemic, most people being tested were ill or hospitalized.

"Because we know that kids are less severely impacted and less likely to be hospitalized, it's almost certain they were getting infected to some degree more than they were represented in the data early on," said O'Leary, who couldn't rule out the possibility that children are now getting infected at higher rates.

He noted that a slight increase in the percentage of children hospitalized from 0.8% in May to 1.4% in July may suggest more children are getting sick. Unlike testing, which doesn't necessarily indicate severity of illness and isn't uniformly available, hospitalization data is less subject to local circumstances and more directly related to the number of people falling ill.

O'Leary noted limitations with the data, because it lacks more detailed information about age, race and ethnicity, and severity of illness.

Pediatric deaths from covid-19, the illness caused by the coronavirus, remained rare, accounting for fewer than 1% of the national total, the report concluded. Children still make up a relatively small percentage of those hospitalized with covid-19 nationwide, but a report from the Centers for Disease Control and Prevention on Friday found that Hispanic and Black children were substantially more likely to be hospitalized with covid-19 than their white peers.

The Louisiana Department of Health reported on Monday that a fourth child or young person died from a rare condition linked to the coronavirus.

Forty-four state residents between the age of 1 month and 19 years have been diagnosed with the condition that the federal Centers for Disease Control and Prevention calls multisystem inflammatory syndrome in children, the department said.

Those who died ranged from 2 to 19 years old, it said.

As of Thursday, health departments nationwide had reported 10 deaths and 570 confirmed cases of the condition in 40 states and Washington, according to the CDC.

Requirements for diagnosis include being under 21, receiving a covid-19 diagnosis or exposure to the virus, and having fever and problems affecting at least two organs that could include the heart, kidneys, lungs, skin or another nervous system.

Although patients as old as 20 have been diagnosed with the condition, the CDC said most cases are in 1-year-old to 14-year-old children, with an average age of 8.

"Louisiana is seeing an increasing number of cases of [multisystem inflammatory syndrome in children] among young people," the state's news release said. It said those diagnosed in Louisiana were hospitalized an average of seven days

Underlying medical conditions were reported in two of the four deaths, the Health Department said.

A review by the Kaiser Health News service and The Associated Press finds at least 49 state and local public health leaders have resigned, retired or been fired since April across 23 states. The list has grown by more than 20 people since the AP and Kaiser Health News started keeping track in June.

One of the latest departures came Sunday, when California's public health director, Dr. Sonia Angell, was ousted AFTER a technical glitch that caused a delay in reporting hundreds of thousands of virus test results -- information used to make decisions about reopening businesses and schools.

Last week, New York City's health commissioner was replaced after months of friction with the Police Department and City Hall.

Dr. Tom Frieden, former director of the CDC, called the numbers stunning. He said they reflect burnout, as well as attacks on public health experts and institutions from the highest levels of government, including from President Donald Trump, who has sidelined the CDC during the pandemic.

"The overall tone toward public health in the U.S. is so hostile that it has kind of emboldened people to make these attacks," Frieden said.

The cuts come at a time when public health expertise is needed more than ever, said Lori Tremmel Freeman, CEO of the National Association of County and City Health Officials.

"We're moving at breakneck speed here to stop a pandemic, and you can't afford to hit the pause button and say, 'We're going to change the leadership around here and we'll get back to you after we hire somebody,'" Freeman said.

As of Monday, confirmed infections in the United States stood at over 5 million, with deaths topping 163,000, the highest in the world, according to the count kept by Johns Hopkins University.

Many of the firings and resignations have to do with conflicts over mask orders or social-distancing shutdowns, Freeman said. Despite the scientific evidence, many politicians and others have argued that such measures are not needed, no matter what health experts tell them.

"It's not a health divide; it's a political divide," Freeman said.

Some health officials said they were stepping down for family reasons, and some left for jobs at other agencies, such as the CDC. One of those who took a job with the CDC was Dr. Nate Smith, who was the secretary of the Arkansas Department of Health when the state's first coronavirus case was announced March 11. Smith was hired as the CDC's deputy director for public health service and implementation science. Some, like Angell, were ousted because of what higher-ups said was poor leadership or a failure to do their job.

Others have complained that they were overworked, underpaid, unappreciated or thrust into a pressure-cooker environment.

"To me, a lot of the divisiveness and the stress and the resignations that are happening right and left are the consequence of the lack of a real national response plan," said Dr. Matt Willis, health officer for Marin County, Calif. "And we're all left scrambling at the local and state level to extract resources and improvise solutions ... in a fractured health care system, in an under-resourced public health system."

Public health leaders from Dr. Anthony Fauci down to officials in small communities have reported death threats and intimidation. Some have seen their home addresses published or been the subject of sexist attacks on social media. Fauci has said his wife and daughters have received threats.

Information for this article was contributed by Chelsea Janes of The Washington Post; by Michelle R. Smith, Lauren Weber, Janet McConnaughey, Paul Weber, Sean Murphy and Janie Har of The Associated Press; by Anna Maria Barry-Jester of Kaiser Health News; and by staff of the Arkansas Democrat-Gazette.