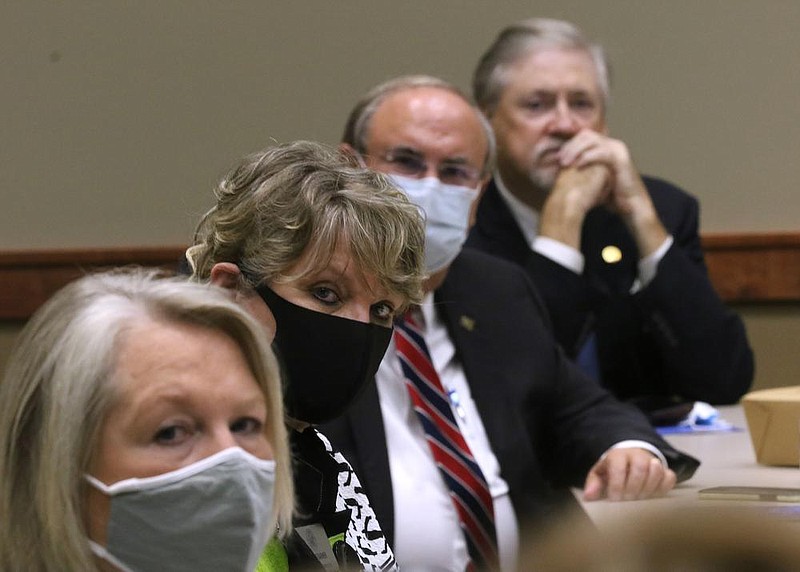 Carol Fleming, president of the Arkansas Education Association -- the state's largest teachers union -- told a legislative education caucus Monday that it is unsafe for schools to resume on-campus instruction until the state is better able to contain the spread of the covid-19 disease.

Fleming and representatives of the Arkansas Chapter of the American Academy of Pediatrics urged that the on-site instruction be delayed until there are specific assurances that it can be done safely. Saying that on-site, in-person instruction is best for students, Fleming however urged starting the upcoming 2020-21 school year in the week of Aug. 24 with online or virtual instruction only.

"We're simply not ready to open in person statewide," she said.

"Moving kids and educators in and out of school based on isolation and quarantine protocols will be too risky and too disruptive to the teaching and learning environment," she continued. "Let's work together to maximize the next two weeks to ensure that we keep students and educators safe, and prepare for a new way to deliver education and support until we can get this virus under control."

Later Monday, Gov. Asa Hutchinson at his nearly daily news conference was asked about the teacher association's call for the sole use of virtual learning.

"Let's start school with in-classroom instruction. Let's do everything we can to be successful, and if we have to adjust down the road in individual school districts, we will do that. It's a difference of approach. I think the approach that we are taking as a state is good for the students," he said.

Arkansas Education Secretary Johnny Key, speaking at a rare open-to-the-public session of the Arkansas Legislative Education Caucus with Fleming and others, said the risks could be greater if there is not some in-person, at-school instruction available to students with great needs.

"They are the ones we are concerned about falling through the cracks," Key said.

"If we do as some have advocated and we don't start until after the first nine weeks and some say until December, my question is, will we ever start on-site?" he asked. "We didn't know three months ago, when the Arkansas cases started coming down, we didn't know what the impact was going to be here at the end of July, beginning of August. We don't know what the impact is going to be in November and December. We do know that students who do not have the access to on-site instruction, on-site therapies, on-site interventions -- they will have more of those who fall through the cracks."

Key acknowledged that the schools can't be open to on-site instruction without some health risks because of the covid-19 pandemic, but protective measures are being place in schools to reduce the health risks so that strong risks of other kinds of failure can be prevented.

Richard Adbernathy, executive director of the Arkansas Association of Educational Administrators, said there are kids in the state who have had little or no instruction since mid March, which is when Hutchinson closed schools for in-person instruction to try to contain the covid-19 spread.

"We could be -- unless there is significant intervention for those kids -- developing a pool of students who are not going to be successful in school or further in life," Abernathy said. "How do you bridge that? How do you weigh which is going to be more harmful -- opening up and risking corona cases and or dealing with a group of kids who don't have any formal education.

Abernathy said the schools need to be opened up "strategically," using what he hopes can be covid-19 case numbers by school district. That kind of data is not available but is under development, he said.

Michele Ballentine- Linch, executive director of the Arkansas State Teachers Association that is described as a non-union teacher organization, said her members run the gamut of those who are fearful of the reopening to those who are eager to be back at school. She also said that the number of member calls to the organization's headquarters has tripled in recent days

"It is a national and state issue, but at the end of the day for education, it truly is a local issue," Ballentine-Linch said about planning for the new school year. "Getting the data on covid 19 cases by school districts is going to be a game-changer in terms of districts making the best decisions for the safety of kids and staff."

Fleming in her comments said said a survey of educators from all 75 Arkansas counties showed that more than 90% had concerns about the return to schools. Her organization's Return to Learn Committee of school employees across the state had created a four-part matrix to guide decisions for the school year. Those principles call for the consideration of health expertise and safety; protection, resources and training; educator engagement in decision-making; and addressing resource and other disparities that have occurred as the result of school closures.

Rep. Mark Lowery, R-Maumelle, questioned Anna Strong and Dr. Natalie Burr of the Arkansas Chapter of the American Academy of Pediatrics about the differing positions taken by the Arkansas chapter and national organization on the reopening of schools.

Strong, executive director of the Arkansas chapter, which does not support the statewide return to school campuses this month, said the state chapter is "in line" with the national organization's call for returning students to school "safely."

Sen. Alan Clark, R-Lonsdale, who chaired the legislative caucus event, asked state educators to research how the pandemic was handled in Sweden to see if there were lessons to be learned for Arkansas and its schools.

Rep. Jana Della Rosa, R-Rogers, warned that the reopening of schools will likely result in a rush of reports from teachers of suspected cases of child abuse. She warned state officials to be prepared for a flood of abuse cases to be investigated.