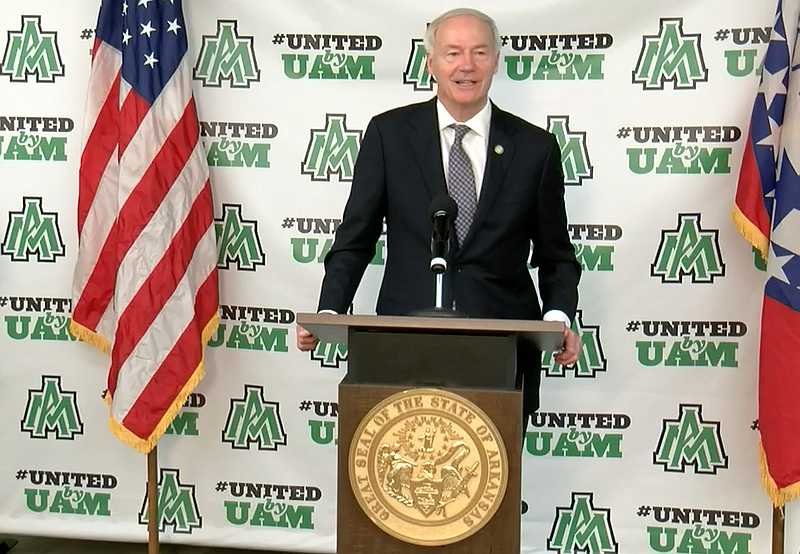 Arkansas Gov. Asa Hutchinson speaks to reporters in Monticello on Wednesday in this still of video provided by the governor's office.

Arkansas reported 703 new cases of the coronavirus on Wednesday, as the number of test results logged by the Health Department lagged for the second consecutive day.

The new cases brought the total number of Arkansans infected by the virus since the beginning of the pandemic to 51,114. Of those, 6,725 are considered active cases.

The number of hospitalizations, meanwhile, fell by 21, to 486. Deaths rose by seven, bringing the toll to 573.

Gov. Asa Hutchinson, speaking from a press conference in Monticello, presented data from the Health Department showing the number of active cases trending down from its peak near the beginning of August. Yesterday, the state recorded its lowest one-day rise in cases since July 7.

The number of test results being reported to the Health Department has fallen below 5,000 for each of the previous two days. On Wednesday, the state recorded 4,401 tests.

Commercial labs, which make up the bulk of Arkansas’ testing capacity, have processed fewer tests for the state as demand has risen around the country. Hutchinson has said he has repeatedly asked the federal government to help boost testing capacity at those labs, including during a conversation earlier this week with Vice President Mike Pence.

On Wednesday, however, Hutchinson announced a new approach, saying that he had signed a letter of intent with the Rockefeller Institute and other states in an attempt to increase their buying power for commercial tests. The governor did not say which other states would be joining the coalition.

“It’s a signal that testing is so important to our strategy that I’ll knock on any door to achieve the result of greater success,” the governor said.

The governor added that he believed members of President Donald Trump’s administration were “very engaged” in increasing national testing capacity. “We just haven’t got it done yet,” he said.

Gov. Asa Hutchinson and state health officials will provide an update on Arkansas' covid-19 response from Monticello at 1:30 p.m.

The total number of coronavirus cases reported in Arkansas remained at 50,411 Wednesday morning, according to a state website. The death toll remained at 566.

[Video not showing up above? Click here to view » https://www.youtube.com/watch?v=GXtObo7JW6A]

CORRECTION: Hutchinson said Wednesday he had signed a letter of intent with the Rockefeller Foundation and other states in an attempt to increase their buying power for commercial tests. An earlier version of this story gave an incorrect name for the foundation.