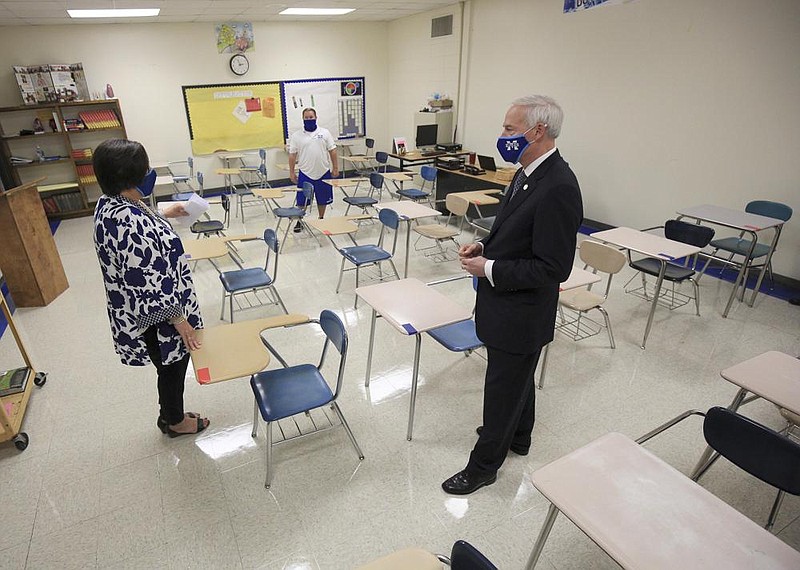 Daily coronavirus tests logged by the Arkansas Department of Health fell below 5,000 for the second-straight day on Wednesday, and Gov. Asa Hutchinson announced his intention to join a new coalition of states seeking to strengthen their buying power for tests.

The Health Department reported 4,401 test results, along with 703 new cases. That brought the total number of Arkansans who have tested positive for the virus since the start of the pandemic to 51,114.

The number of hospitalizations, meanwhile, fell by 21, to 486. Those on ventilators dropped by three, to 113. Deaths rose by seven, bringing the toll to 573.

Commercial labs, which make up the bulk of Arkansas' testing capacity, have processed fewer tests for the state as demand has risen around the country. Hutchinson has said he has repeatedly asked the federal government to help boost testing capacity at those labs, including during a conversation earlier this week with Vice President Mike Pence.

Still, testing numbers have lagged. As of Tuesday, the Health Department had received 61,919 test results in August. It's on pace for fewer test results than in July, when the state fell about 11,000 tests short of the governor's 200,000-test goal for the month.

On Wednesday, Hutchinson announced a new approach to added testing, saying he had signed a letter of intent with the Rockefeller Foundation and eight other states in an attempt to increase their buying power for commercial antigen tests, the results of which are not included in the state's official case count.

"It's a signal that testing is so important to our strategy that I'll knock on any door to achieve the result of greater success," the governor said.

The governor added that he believed members of President Donald Trump's administration were "very engaged" in increasing national testing capacity.

[Video not showing up above? Click here to watch » https://www.youtube.com/watch?v=cQTE23vxoy4]

The following counties reported 20 or more new cases of the coronavirus on Wednesday: Pulaski, with 78; Logan, with 47; Sebastian, with 43; Garland, with 42; Jefferson, with 33; Pope, with 30; Washington, with 26; Craighead, with 24; Mississippi, with 23; and Crittenden and Crawford counties, with 21 apiece.

Hutchinson joined the governors of Maryland, Michigan, Ohio, Louisiana, Massachusetts, North Carolina, Virginia and Utah in signing a letter of intent to partner with one another and the New York City-based Rockefeller Foundation to purchase testing equipment and related supplies, according to a copy of the letter provided by the governor's office.

"We're going to work as a consortium of states to enhance the buying power of states with our commercial labs to strengthen our place in the marketplace," Hutchinson said.

The type of tests being sought by the coalition, however, are not considered as accurate as other tests and are excluded from the Health Department case counts that the governor uses at his near-daily news briefings.

In a news release announcing the coalition last month, the Rockefeller Foundation said it would "seek to expand the use of rapid point-of-care antigen tests," which have a quicker turnaround time -- less than an hour -- than other lab-confirmed tests.

Last month, the governor announced the state had purchased 200 antigen testing machines along with enough kits to process 3,600 tests. Those who test positive through antigen tests are considered "probable" cases and can be referred for more conclusive tests, according to a Health Department spokeswoman.

Christy Feig, a spokeswoman for the Rockefeller Foundation, said the goal of the partnership is to acquire 500,000 antigen tests for each participating state. She added that Rhode Island has also agreed to join as the 10th state in the partnership.

In order to supply that many tests, Feig said, the manufacturers would have to ramp up their production.

"That's the whole idea of the compact, to make them convinced that there's a market here," Feig said.

Hutchinson noted that Arkansas has yet to sign a written contract, adding that the state's share of the costs will not be known until an agreement is reached to manufacture and supply the tests.

Two staff members in the Little Rock School District have tested positive for the coronavirus, said Pamela Smith, a spokeswoman for the district.

One of the employees worked at Mabelvale Middle School but hasn't been at the school since Aug. 5, Smith said.

That employee reported her positive test result to the school by telephone on Monday, said Smith.

"That is when health protocols were immediately enacted," Smith said in an email. "Teachers returned to work on Tuesday."

Smith said the employee had been in contact with two other staff members, who are now quarantining "in accordance with guidelines as a precaution."

The other employee who tested positive works at plant services, said Smith. That employee reported the positive test result on Monday evening.

"After speaking with the employee and investigating the case it was discovered that the employee was not in direct contact with any other employee. Due to this information no other employees were required to quarantine. When making these decisions we work very closely with the Arkansas Department of Health and follow their guidance," Smith said via email.

Asked whether the state would provide local data on the number of teachers and students who test positive for the virus once the school year starts the week of Aug. 24, Secretary of Health Jose Romero said that such information would be provided at the district level, and possibly for individual schools.

"We're discussing that now; we don't know whether we can actually do that and respect confidentiality," Romero said. "We are going to work to that end."

On Tuesday, Hutchinson announced that the state, working with the Arkansas Center for Health Improvement, would provide data on infections in communities that make up various school districts in Arkansas.

The Health Department's daily report on the presence of covid-19 in facilities such as nursing homes, prisons, jails and residential care facilities showed the following places that had an increase of at least 10 cases since the report compiled the day before:

• Cavalier Healthcare of England, in Lonoke County, added 13 cases among residents Wednesday, giving it a total of 18.The number of staff cases remained at six.

• Newton County Nursing Home, in Jasper, had nine more residents found to have tested positive nearly two weeks ago, on Aug. 1, giving it a total of 59, plus three among staff members, raising the total among workers to 30.

• The Green House Cottages of Southern Hills, in Rison in Cleveland County, added 12 cases among residents Tuesday, increasing the total to 14. Another four workers tested positive, raising that total to five.

• The Shalom Recovery Center, in Hot Springs National Park in Garland County, had 25 residents test positive, including 17 added to the list on Wednesday, and the first 13 new cases among workers.

Among prisons and care facilities, 6,141 inmates or residents have tested positive since the beginning of the pandemic, as well as 972 workers.

Information for this article was contributed by Bill Bowden, Cynthia Howell and Alyson Hoge of the Arkansas Democrat-Gazette. 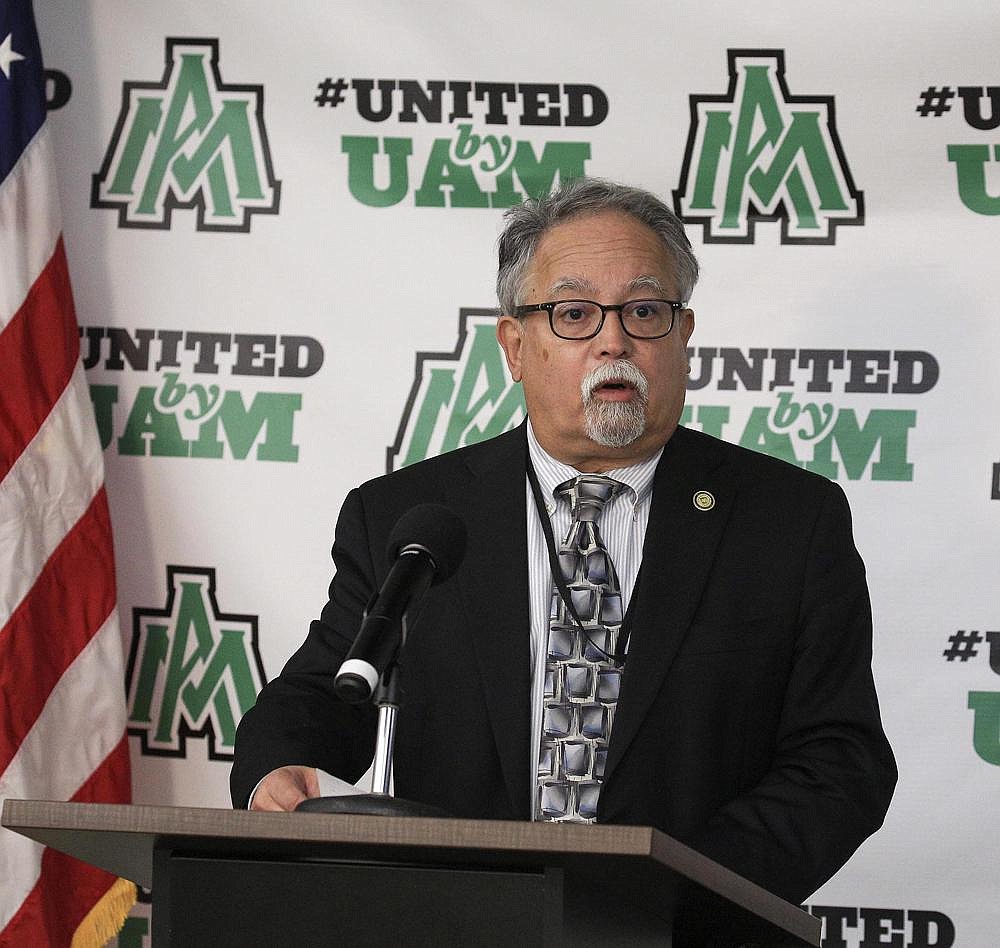 Health Secretary Jose Romero said Wednesday at the coronavirus briefing in Monticello that providing local data on the number of teachers and students who test positive for the coronavirus would be at the district level, and possibly for individual schools, but that confidentiality was a consideration. (Arkansas Democrat-Gazette/Staton Breidenthal) 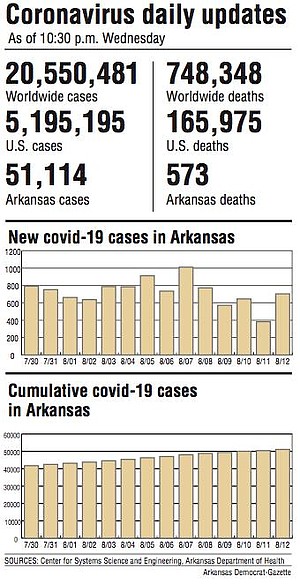