'TRON' No. 3 well worthy of excitement 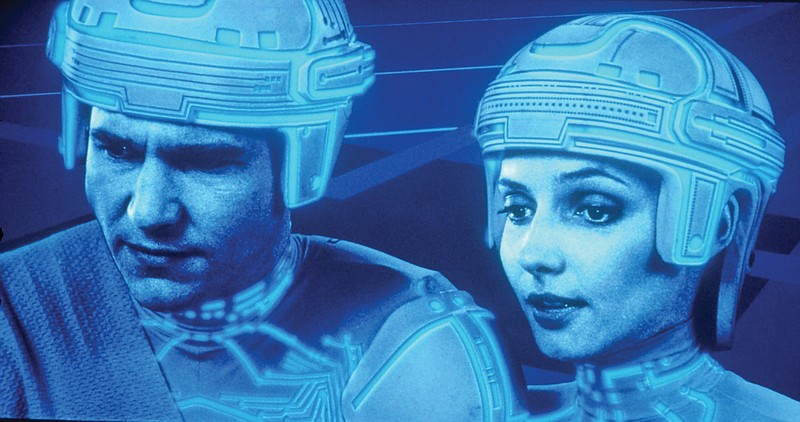 Jeff Bridges and Cindy Morgan star in “TRON,” Disney’s 1982 science-fiction film that was inspired by the early video game Pong.

Ask the casual movie watcher to name his or her favorite Disney films, and you're likely to get a different answer depending on their age. Kids today might pick "Frozen." Millennials could pick "Beauty and the Beast" or "The Lion King." Older fans might even pick a classic like "Snow White and the Seven Dwarfs."

There are also Disney movies that probably aren't going to get picked, ones that have fallen through the cracks across the years, movies like "The Black Cauldron" or "Oliver and Company."

Then there's the digital masterpiece that is "TRON." Released in 1982 when computers were as mystifying to people as automobiles to an old cowboy, "TRON" truly pushed the envelope for what was possible in digital effects.

George Lucas gets a lot of rightful attention for what he and his crew were able to accomplish in "Star Wars -- Episode IV: A New Hope" in 1977. But work on "TRON" started in 1976 when director Steven Lisberger became inspired by Pong. You read that right. Super Mario Bros. wouldn't be out for another nine years.

Lisberger worked with a producer named Donald Kushner to start an animation studio with the aim of making "TRON" an animated film. What it evolved into instead was a combination of live-action elements with animation (both backlit and computer). It's a bizarre spectacle of a movie and just a true gem.

Roger Ebert and Gene Siskel gave the movie four out of four stars. It's a technical marvel for what could be accomplished in 1982, with a unique story and fantastic performances from actors like Jeff Bridges and Bruce Boxleitner.

So why am I writing about this movie? Because there's a third film in the works, and apparently it's now got a director and Oscar-winning actor attached to it. According to Forbes, the director of 2016's "Lion," Garth Davis, is set to direct "TRON: Ares." And also attached in some starring capacity will be Jared Leto (hold up, I'll get to him).

The announcement of a third "TRON" film was likely met with three reactions on social media.

"Yes!" (albeit from the smallest group)

I'm in the last camp there, and I'll tell you why. "TRON" is a fantastic series that deserves as much life as Disney is willing to give it.

When you watch the original movie in this franchise, you have to grasp it for the original story and amazing effects of the time. How many good movies that combined live-action and animation can you look back on and say, "That was pretty sweet."?

"Who Framed Roger Rabbit?" (which came out six years after "TRON") and ...? That's what I thought. You sure as hell ain't putting "Cool World" on that list.

"TRON" accomplished so much while also telling an original story. An arcade owner gets digitized into a computer world and has to escape before an evil artificial intelligence kills him. And your main character is played by Jeff Bridges, the superior Rooster Cogburn? That's good stuff!

Now, sure, "TRON: Legacy" has some missteps. The story and casting of Garrett Hedlund are misfires that drag the movie down. But there are simply too many other grand factors to this sequel to scrap the whole thing.

I would argue there's much ''TRON 3'' can carry over from its predecessor. "TRON: Legacy" is still a sleek and visually impressive film at the very least. I remember going with a couple of buddies to see it at the IMAX in Little Rock back in December 2010. I was a junior at Arkansas Tech University.

Seeing that movie in IMAX blew my mind. I felt like, once again, Disney had reached into the raw talent of what its digital artists were capable of rendering and did the original movie proud.

Was the story good? It was OK. But Garrett Hedlund as Jeff Bridges' son was the biggest letdown of the movie. He was so bland and flat.

Fortunately, stars like Olivia Wilde and Michael Sheen make up for his lack of performance.

And then there's the strongest and by far the most unexpected success of "TRON: Legacy," the soundtrack. The music from Daft Punk is mind-blowing, just truly spectacular stuff. "TRON: Legacy" was nominated for an Oscar in best sound editing, but its soundtrack was more than Oscar-worthy. The whole score is just liquid fire.

It irks me that a film like James Cameron's "Avatar," just truly a garbage movie, can float by on its visuals (which are admittedly impressive. Scores and scores of people love "Avatar" because it looks pretty. It receives endless praise, and apparently endless time to make sequels. Seriously, Cameron, give it up, and go make the sequel to "Alita: Battle Angel."

But "TRON: Legacy" isn't given half the same consideration, when it had a killer soundtrack, a great supporting cast, and an original story.

Is the sequel perfect? No. Is it worth watching? Yes.

What it boils down to is "TRON" and its sequel aren't money-making giants like "Pirates of the Caribbean." They're art pieces that do good to make their budget back and feed the cult following "TRON" has built since the 1980s. It's a fascinating universe filled with limitless potential as the comics and animated series like "TRON: Uprising" have shown.

If I, as a movie columnist, have to endure Disney's lackluster live-action remakes like the ball of dung that is "The Lion King," the least the House of Mouse can do is continue to fund its more interesting franchises, like "TRON." Hell, go ahead and reboot "Atlantis" or "Treasure Planet" in live-action.

"TRON 3'' can build on so much from the entries that came before it. It needs the daring and original creativity of "TRON" and the music and side characters (especially Olivia Wilde) of "TRON: Legacy."

I've seen some folks online turned off by the attachment of Jared Leto, and sure, after reading how he behaved as the Joker while filming "Suicide Squad," he sounds like an absolute jerk. And his performance didn't pay off. It was terrible.

But he can do good things. He made a decent villain in "Blade Runner: 2049," and I'm looking forward to seeing him in "Morbius," assuming Sony ever lets that film see the light of day after the covid-19 apocalypse.

If Jared Leto's name being attached to "TRON 3'' is the cost for fans to have a third entry into this franchise, so be it. It's a price I'm willing to pay. And I'll continue to be enthusiastic about this movie. It's a third chance to build on the legacy Bridges and Lisberger started while avoiding the pitfalls of the second entry.

Plus, it just might encourage a whole new generation to go discover "TRON" on Disney+. It's worth getting excited about.