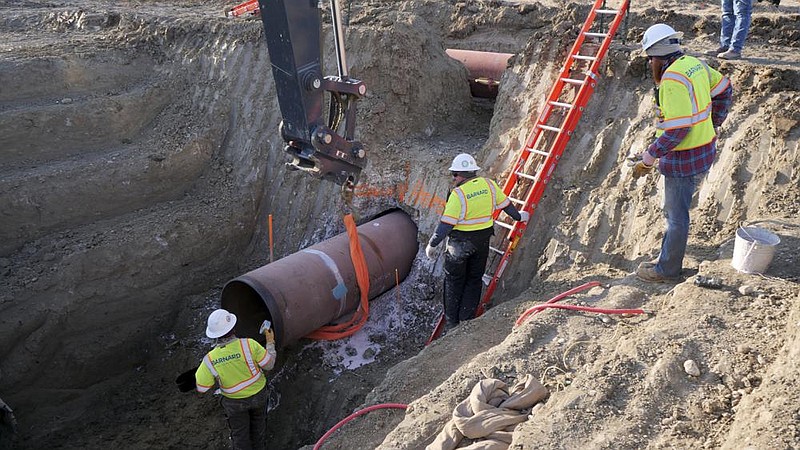 TC Energy workers install a section of the Keystone XL crude oil pipeline in April at the U.S.-Canada border north of Glasgow, Mont., in this file photo provided by the company. TC Energy has submitted an order to Welspun Tubular LLC for the production of more than 1 million feet of 36-inch line pipe for the Keystone project. (AP)

Welspun Tubular LLC would have faced a major reduction in its Little Rock workforce had it not received a new order this week from TC Energy, Welspun's top American executive said Friday.

More than 500 people work at Welspun's large-diameter pipe mill on a 740-acre site at the Port of Little Rock. The facility can produce 350,000 tons of pipe annually.

The order was for more than 1 million feet, or about 190 miles, of 36-inch line pipe for the Keystone XL pipeline.

"The main thing is it's a significant order that will keep our people busy for several months," Rusty Fisher, president of Welspun's Americas business unit, said in an interview. "That's what we were trying to do. It was very much an order that was needed at the facility so we're very pleased to get it. If we didn't have this order, we would've had to significantly reduce our workforce. It was key for us."

The company announced Thursday that it had received the order to supply the pipeline.

Calgary, Alberta-based TC Energy wants to build the $8 billion Keystone XL pipeline to ship up to 830,000 barrels, or about 35 million gallons, of crude oil daily from the tar sands of Alberta through Montana, South Dakota and Nebraska, where it would tie in to existing pipelines to carry the crude to U.S. refineries.

The 1,210-mile-long pipeline is expected to enter service in 2023, Welspun said in the news release.

The announcement will add to the fortunes of the Port of Little Rock, which has seen barge activity fall amid the coronavirus pandemic. Its 2020 budget projected the port would generate $3.6 million in revenue this year.

While new industry has made its way to the port, most notably an Amazon.com distribution center, the effect of Welspun on the port's bottom line is significant. The company opened its $150 million facility at the port in 2009.

"Welspun is one of our flagship partners and are heavy users of rail and barge," said Bryan Day, the port's executive director. "They are the largest single revenue source for the port."

Among them was Gov. Asa Hutchinson who led a delegation to India last fall, in part to support Welspun, which is a subsidiary of an Indian company.

"I am pleased that Welspun, a notable business leader for many years, has partnered with TC Energy to produce over a million feet of line pipe for the Keystone XL Pipeline," Hutchinson said. "This partnership will lead to further economic growth in our state and will create good-paying jobs for Arkansans."

"At this tough time in our economy, this ensures that Welspun can keep their talented force of nearly 500 workers engaged until, at least, early 2021," he said. "This pro-growth investment in central Arkansas will enhance our nation's modern, safe energy infrastructure while supporting the livelihood of 500 central Arkansas families in the midst of this pandemic."

Executives involved in the pipeline project say its benefits extend well beyond the port and Welspun's jobs.

The project, 10 years in the making, has had a rocky history.

In March 2017, President Donald Trump gave the go-ahead to the project, which was supported by energy advocates and opposed by environmental groups. The president's OK came after the Trump State Department said the project advanced U.S. interests, a reversal of the conclusion former President Barack Obama's administration reached less than 18 months earlier.

Fisher declined to say how much money the order would generate for Welspun or what percent of its mill's capacity it will represent.

"If we give sizes of orders publicly, our competitors can figure out various things," he said. "It's not something we can disclose."

Welspun Tubular is the flagship subsidiary of Welspun Pipe Inc., which says it is among the largest welded line pipe manufacturers in the world.

The company said it would use pipe-forming equipment, pipe inspection equipment and pipe-coating equipment to produce the pipe, which will be made with steel melted and manufactured in the United States.

Welspun is at least the second U.S.-based pipe manufacturer to win a piece of Keystone Pipeline XL business.

Berg Pipe, which has pipe production facilities in Panama City, Fla., and Mobile, Ala., announced earlier this week that TC Energy had awarded the company a contract that Berg said will keep hundreds of its workers in both cities busy into 2021.