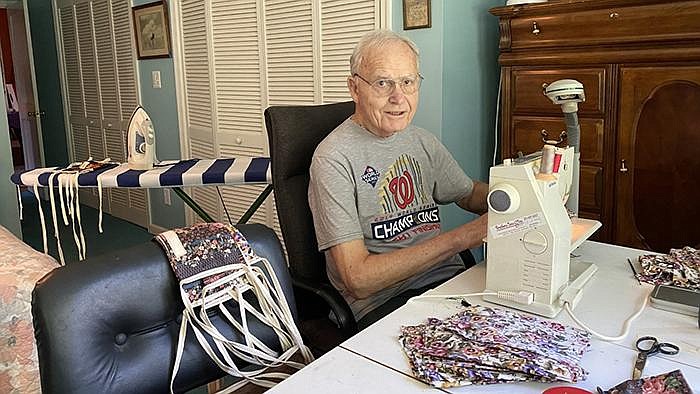 Dan Willkens has been sewing masks since the start of the novel coronavirus pandemic. (Photo courtesy of Diane Willkens)

Dan Willkens has always made things. The 90-year-old Chevy Chase, Md., resident likes to create with his hands, likes to watch hard work lead to a finished product. Decades ago, in his career as a mechanical engineer in manufacturing, he used to say "you have to put something in the box." In his retirement he took up woodworking, making gifts for his children, grandchildren and great-grandchildren. It always felt good to produce something useful, something thoughtful, something sturdy.

In late March, as the novel coronavirus pandemic took hold of the country and local hospitals faced a shortage of personal protective equipment, he saw an opportunity to make something new. Dan, who lives with his daughter Diane, announced the idea at the kitchen table one night.

Although Willkens had no experience with a machine, he had always been surrounded by sewing. His wife of 67 years, Marie, had been a home economics teacher and often made garments for their children. She died three years ago.

"Right up until the end, she was sewing," Willkens said.

Diane got him acquainted with a sewing machine and together they looked up a guide to mask-making. Despite his inexperience, and his being left-handed on a standard machine, Willkens finished his first mask two days after his kitchen table announcement. By the end of the week, he found a rhythm, looking comfortable with the machine and invigorated by his new hobby.

Soon, it took over his days. He spent the entirety of this spring at the sewing machine, starting work after breakfast and going until dinner. Diane estimates her father spent the final months of his 89th year working 10 hours a day.

"He loves to have a mission," she said. "He's very dedicated, he doesn't like to be idle and he thinks everyone needs to have a purpose."

In that time, Willkens has made more than 300 masks. Most of them have gone to Suburban Hospital in Bethesda, Md., which has been accepting drop-off deliveries of PPE. Willkens said making those deliveries feels good but doesn't make his work special. It doesn't feel like an act of charity. It just feels right.

"These masks for me were just putting something in the box," Willkens said. "I didn't want to sit around here doing nothing."

Before long, summer had arrived and with it his 90th birthday. Originally he had planned to travel to Tennessee to see some of his 14 great-grandchildren. But as the national numbers of covid-19 cases and deaths continued to rise, he canceled those plans.

Thinking of ways to make the big day special, Diane remembered the drive-by birthday parades her neighbors held for their two young children.

"We would just stand outside and watch and cry," she said. "They were so beautiful, it's a beautiful idea."

Her friend posted on a local email list, asking for anybody who was free on July 25 and wanted to provide joy. They were to gather at a nearby community center and form a surprise birthday parade for Willkens. Diane also contacted the Montgomery County Police Department. Her daughter, Casey, got word to the Bethesda-Chevy Chase Rescue Squad.

That Saturday, all of Willkens's children were gathered wearing matching shirts that read "Aged to Perfection" with a picture of his face on it. They talked and celebrated, eventually shifting the gathering in the front lawn. Diane went to the community center to check on the parade.

The squad cars, lights flashing and sirens sounding, were joined by several rescue vehicles and more than 30 vehicles of friends, neighbors and strangers. Surrounded by his children, Willkens watched the parade go by, his arms waving and tears in his eyes.

"It was unbelievable," Willkens said. "All of a sudden here comes this parade out of the clear blue sky. Just amazing."

For a man who had spent the past four months trying to serve his community, the parade functioned as a celebration and a thank you. To Diane, it confirmed her belief that "if you give joy, you get joy." To Willkens, it was simpler.

"It means that people care," he said. "In spite of all the animosity and the things going on ... people still care about people." 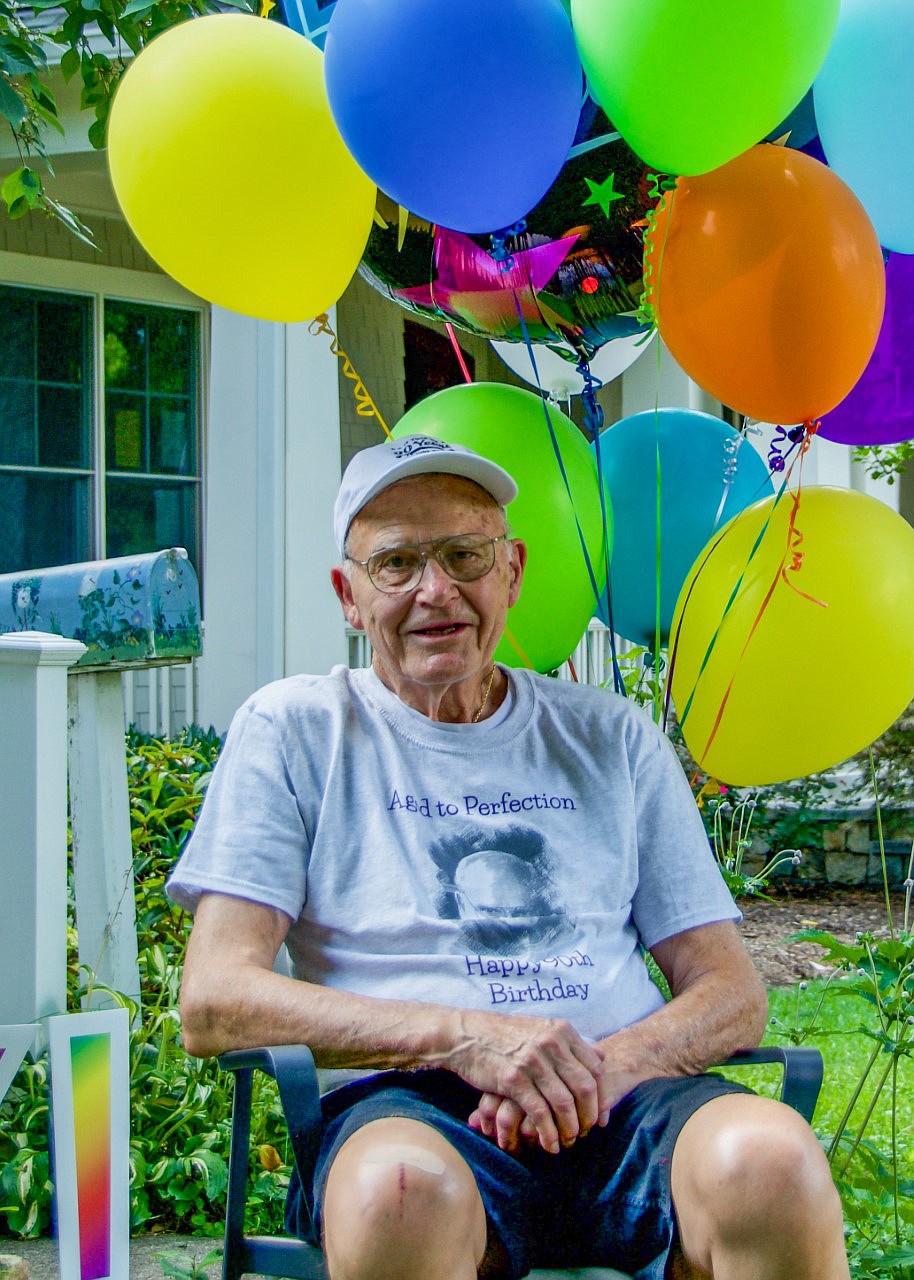 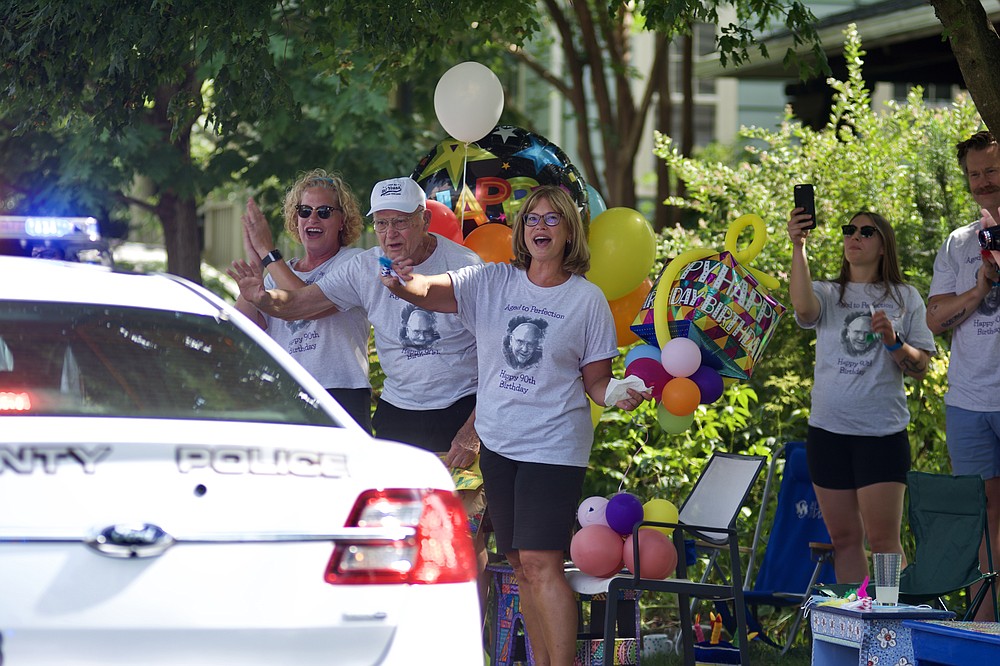 Dan Willkens with his family at the surprise birthday parade. MUST CREDIT: Photo courtesy of Diane Willkens
ADVERTISEMENT