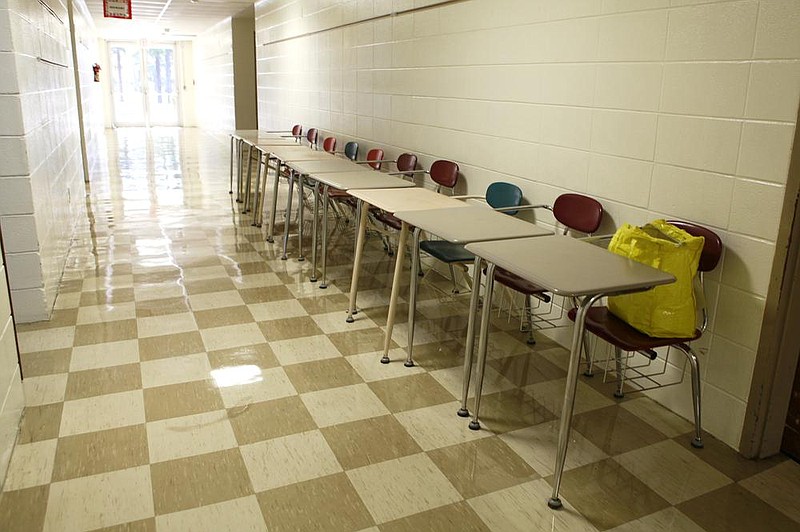 Desks sit in a hallway Thursday at Beryl Henry Elementary School in Hope as staff members rearrange furniture to spread out students. Almost half of Beryl Henry’s students signed up for online learning this fall. The rest will be positioned several feet apart in classrooms in a bid to stop them from spreading the coronavirus. (NWA Democrat-Gazette/Dan Holtmeyer)

Covid-19 will accompany students, teachers and staffers as they return to Arkansas' public schools next week, health and district officials say.

"It's not a question of if, but when -- and how much of an effect does it have," said Dr. Joel Tumlison with the Arkansas Department of Health.

Districts statewide are working to slow the virus's spread, prevent large outbreaks, and protect teachers and staff members who, as a whole, are more vulnerable to the disease than are the children they oversee.

The state health and education departments have provided recommendations, but no overarching mandate, on what districts should do to curtail the virus and prepare for its arrival in their buildings.

Districts from the Delta to the Texas line are nonetheless taking similar approaches.

Mask requirements are increasingly common, at least for certain grades or parts of the school day. Thousands of students are staying home to take partial or all-online instruction, and school visitors are limited.

In classrooms, several feet of space separate desks. Schools also are reducing students' movements, like having them eat lunch in classrooms and staying in one classroom throughout the day to limit contact in hallways. They also are using staggered schedules.

Custodians and teachers are doing more intense cleaning. They plan to sanitize buses after each run and to make sure students have their own supplies so they don't share. Every bus and classroom will have bottles of hand sanitizer.

After a statewide Department of Education survey in July, districts said students or staff members with covid-19 symptoms or who test positive for the virus will be isolated at school until they go home, where they will stay until they're healthy.

Their classmates and other close contacts may have to do the same, depending on Department of Health guidance on a case-by-case basis. If the virus spreads at high enough levels, individual schools or districts could close, with those decisions made in collaboration with the district and the health and education departments, according to the state agencies.

Still, all of the safety measures won't eliminate the virus's spread, partly because it can be transmitted by people who have no symptoms. The virus will get through, Tumlison said.

However, state and federal guidelines, if followed, can help limit it so fewer people catch it at a time, local health officials and the Centers for Disease Control and Prevention have said.

The coronavirus spreads mostly through coughing, laughing, talking -- anything that can propel exhaled particles toward others. Cloth face coverings, especially those with two or more layers, and physical distance can prevent the virus from reaching other hosts.

Limiting movement and keeping classrooms segregated from one another means exposing fewer people to any one case.

The CDC and the American Academy of Pediatrics this summer recommended reopening schools with such safety measures in place.

"We have a plan, and we hope the plan works," Principal Roy Turner said earlier this month at Hope's Beryl Henry Elementary School.

Beryl Henry visitors will have their temperatures taken with a forehead-scanning thermometer. Around 100 students, or almost half of the student body, signed up for virtual learning, which will help the school spread out the children getting in-person instruction.

The first couple of school days will be spent training the kids to wear masks, and to allow more space as they line up and play at recess.

"School is a place to learn and have fun, and we're going to make sure we do that," Turner said.

The Arkansas chapter of the Academy of Pediatrics opposed the blanket reopening of schools, noting that some counties and communities, such as Black and Marshallese families, are at greater risk of contracting covid-19 than others.

Dr. Sheldon Riklon, a physician who is Marshallese, and some educators around the state said they wish that returning to school could have been phased in slowly, perhaps conducting another semester online to see if covid-19 cases abate.

Barton-Lexa School Superintendent David Tollett said classes in his Phillips County district could quickly be brought to a halt if too many bus driver or other staff members are exposed to the virus and have to quarantine.

Some district leaders say they are happy to have kids back in person -- for as long as it can last.

"We're all a little leery about starting school, but it's for the benefit educationally of our children. We try not to be fearful," said Willie Murdock, superintendent at the Lee County School District, where students are split about evenly between online and traditional instruction.

"We just have to pray," said Murdock, who has recovered from covid-19.

Health officials have called large, indoor gatherings the ideal opportunity for the coronavirus to spread.

Covid-19 symptoms range from unnoticeable to moderate for most, but they can worsen to pneumonia and other potentially deadly complications in some people.

The risk for more severe illness is low for young children, according to the CDC. The risk begins rising around age 10 and increases from there. In-person school means those low-risk students will mix in with their higher-risk teachers, principals, older classmates, bus drivers, secretaries, custodians, lunch workers, counselors and all of their families at home.

As of Friday, 587 Arkansans have died from the virus.

Hannah Clark, a Fayetteville parent, and her husband signed up their two children for private school. Both parents work, so the family needs the children to go to school five days a week. They made their decision when the Fayetteville district was planning to offer two days a week of in-person instruction.

"We know that it can be done," Clark said of safe schooling, pointing to summer schools that contained their coronavirus cases. Kids can come into contact with others during their in-person day, anyway, so Clark didn't see much upside to virtual classes.

"I feel comfortable sending my children back in person. I can't speak for every parent, and I greatly appreciate every choice that every parent is having to make right now," she said.

The Arkansas Education Association, which represents thousands of teachers in the state, said a survey of around 6,000 of its members this summer found that four out of five were concerned for their own health and that of their families, their students and their students' families. A little more than half opposed reopening this fall, and the same number were considering retiring rather than go back into schools, according to the survey.

Lauren Dougherty, a Fayetteville elementary school teacher, said her district is working to make school return as safe as possible, but it will be difficult keeping everyone apart, sanitized and masked.

"My feeling safe is fully connected to the kids being safe," she said.

With extra safety protocols come extra costs for the districts.

Arkansas districts have spent at least $6 million in federal emergency grants on personal protective equipment such as masks and face shields for their staffs and students, according to Arkansas Department of Education data.

The data provides only spending ranges for individual districts, so exact spending on personal protective equipment for each one is unclear.

Little Rock, the second-largest district in the state, reported spending the most for protective equipment, using more than $500,000.

Bentonville spent $127,000 from its operating budget for supplies to slow the virus's spread, its chief financial officer wrote in an email.

The Hope district spent $39,000 from the federal money for the company Ecovasive to apply a spray that the company says can prevent viruses from sticking to surfaces like bus seats and desks. Yellville-Summit, Highland and other districts have also signed up for that service, according to the company.

"We look at that disinfectant protocol as just another layer of protection for our families," Hope Superintendent Bobby Hart said. He acknowledged that infection is less likely from contact with surfaces than through the air.

"It's money well spent if it keeps one person from getting sick," he said.

The Health Department's Tumlison agreed. With so many different age and risk groups together in schools, he said, the best course of action is to "employ as many of the protective measures as we can," including more masks, more spacing, more cleaning and less social mixing.

Some districts' changes have no additional cost. In Springdale, Maintenance Director Jeremy White said he swapped custodians' shifts. Two-thirds of them worked at night during normal school years, but now two-thirds will work during the day to keep up with cleaning.

The costs and logistics of providing protective equipment and taking other actions have overwhelmed some districts, many of which used the federal emergency money for technology, said Megan Slocum, associate superintendent for Fayetteville and a member of the Northwest Arkansas Covid-19 Task Force, a coalition of local civic leaders.

The task force depends on donations and has held a mask drive for weeks to help supply teachers and students in a dozen districts. The state Education Department also has set aside a $1 million fund for a supply stockpile for districts around the state.

"It is a supply and demand issue -- we are all coming back online at around the same time," Slocum said. "Districts are doing the very best they can." 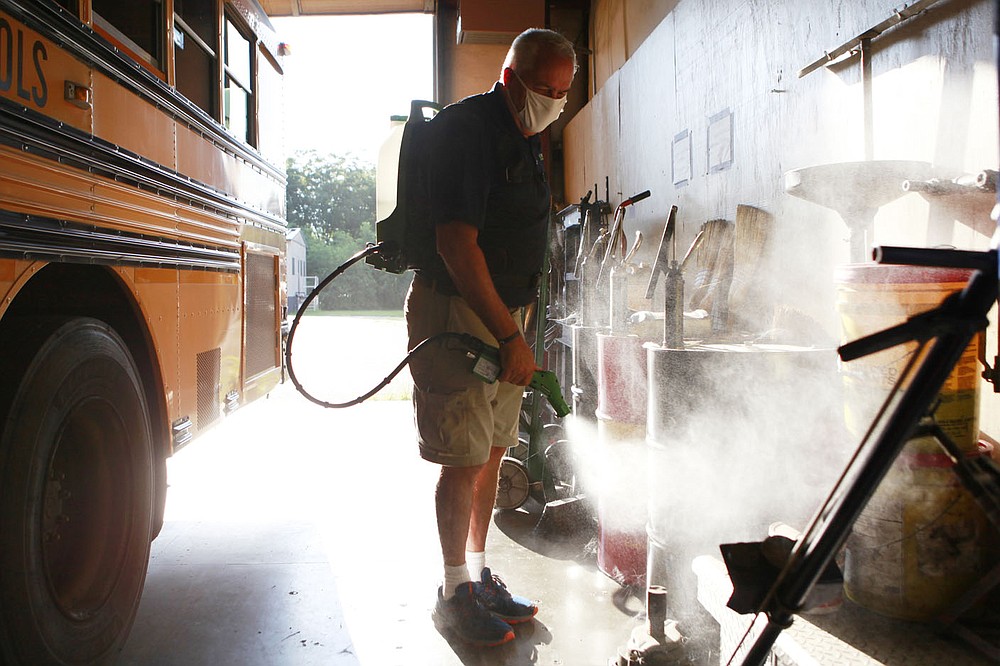 Tim Martin, who oversees the company Ecovasive's work in Arkansas, applies the company's antiviral spray to Hope Public School's transportation facility on Aug. 4. Martin said the spray prevents viruses and other microbes from sticking to surfaces. The treatment is one of many extra steps school districts around the state are taking to try to prevent the spread of coronavirus. 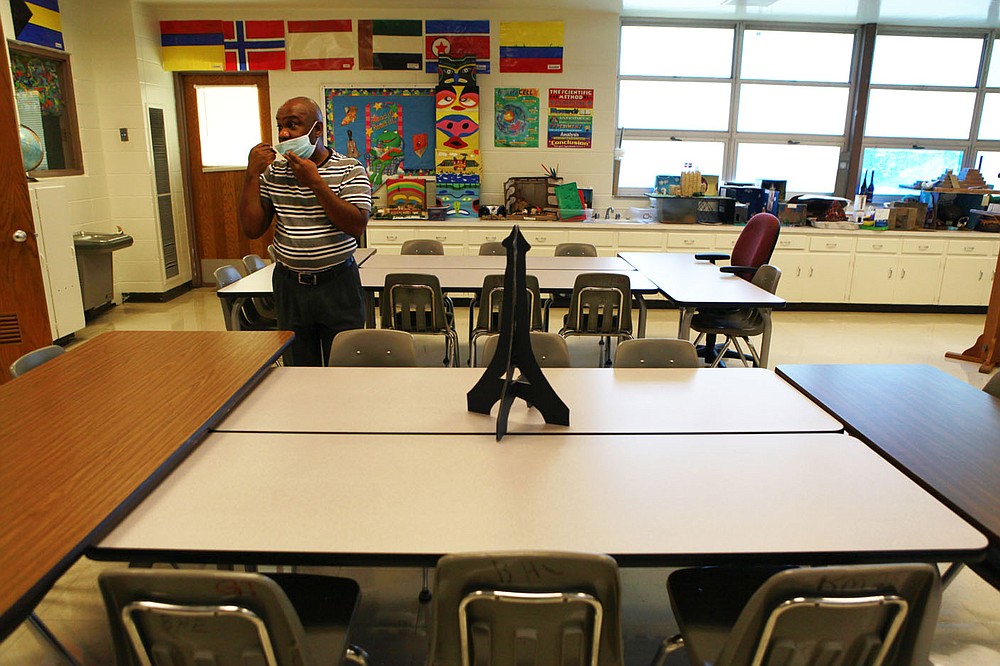 Kenneth Stewart, gifted and talented program coordinator for Hope Public Schools, said this year's classes in his classroom at Beryl Henry Elementary School will be smaller and more spread out and use their own supplies rather than shared supplies, all to try to prevent coronavirus from spreading. Even quiz bowl and chess tournaments will likely go online, he said in an Aug. 4 interview. 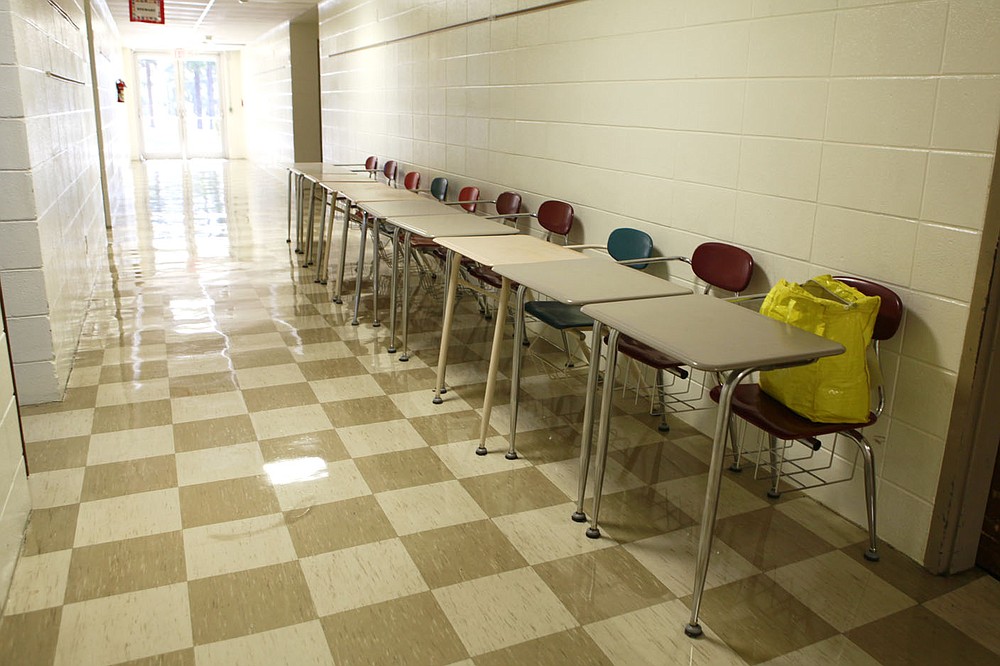 Desks sit in a Beryl Henry Elementary School hallway in Hope on Aug. 4, as staff members rearranged furniture to spread out students. Almost half of Beryl Henry's students signed up for online learning this fall; the rest will stay several feet apart during the day to try to stop them from spreading the coronavirus to each other. 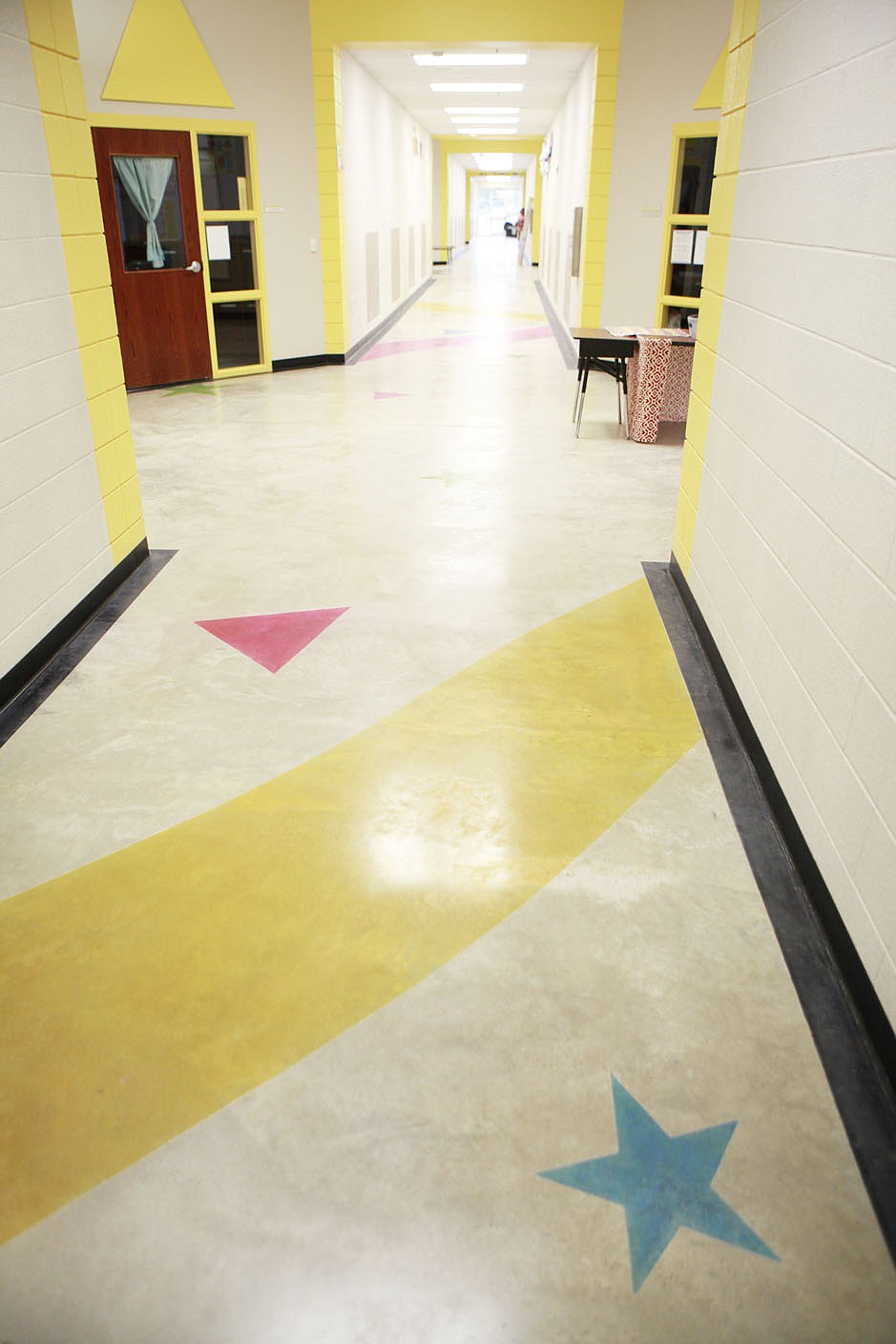 Designs adorn a plain concrete floor at Springdale's Turnbow Elementary School after the removal of carpeting in order to improve and speed up cleaning. Not having to vacuum or shampoo carpet will save custodians about a quarter of the time so they can move on to the many other things they'll need to sanitize throughout the day, Springdale maintenance Director Jeremy White said. 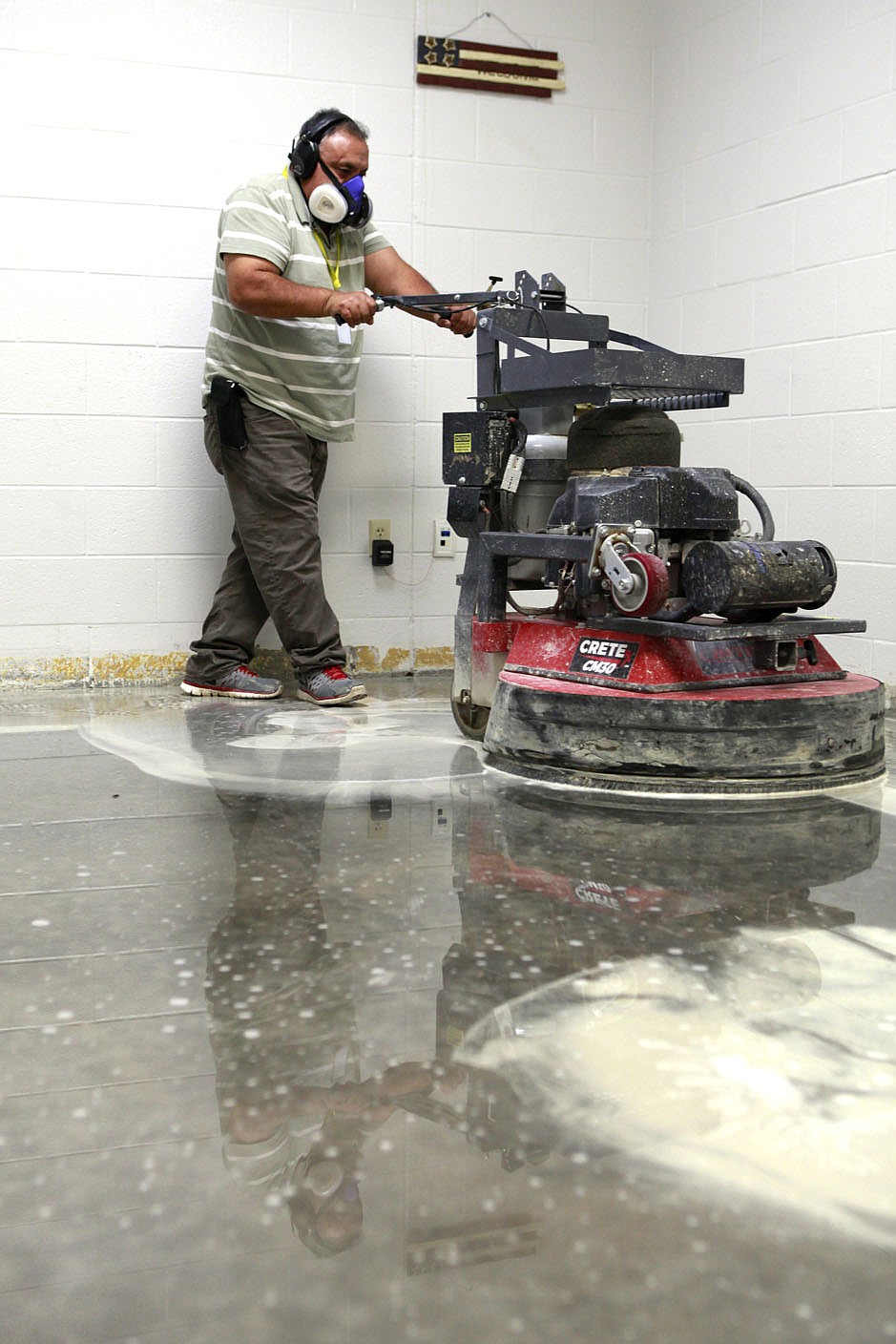 Springdale Public Schools custodian Rafael Duenas polishes a concrete floor in George Junior High School on Aug. 12. Since March the district has removed around 200,000 square feet of carpet in school hallways and offices in order to make the floors easier to sanitize and save time for other increased cleaning, maintenance Director Jeremy White said.
More News

To see a video of some cleaning methods, visit: http://www.nwaonline.com/covidcleaning0816/ 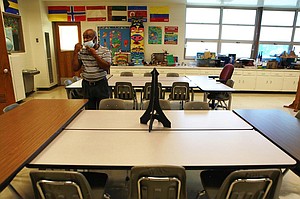 Photo by DAN HOLTMEYER/For the Democrat-G
Kenneth Stewart, the gifted and talented program coordinator for Hope Public Schools, said the classes he teaches at Beryl Henry Elementary School will be smaller, and students will be more spread out. They also will use their own supplies rather than share them. Activities such as quiz bowl and chess tournaments will likely be held virtually, he said Thursday. (NWA Democrat-Gazette/Dan Holtmeyer) 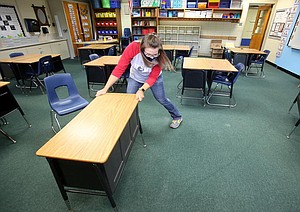 Photo by Thomas Metthe
Fifth grade teacher Anna Mask straightens out desks Thursday in her classroom at Williams Elementary School in Little Rock after getting them rearranged to allow for social distancing. (Arkansas Democrat-Gazette/Thomas Metthe)