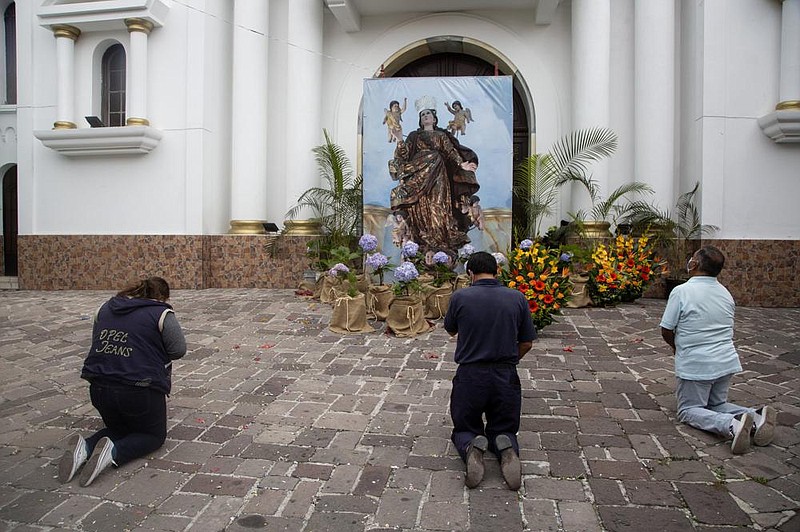 Devotees kneel in prayer Saturday in Guatemala City before a makeshift altar honoring the patron saint of the Guatemalan capital, the Virgin of the Assumption. Catholic pilgrims gathered outside the church that bears her name, despite the pandem- ic-related postponement of religious celebrations marking the occasion. (AP/Moises Castillo)

TEHRAN, Iran -- Iran's Revolutionary Guard vowed Saturday that there would be dangerous consequences for the United Arab Emirates after it announced a historic deal with Israel to open up diplomatic relations.

The UAE is the first Arab Gulf state to do so and only the third Arab nation to establish normalized relations with Israel, Iran's regional archrival. As part of the U.S.-brokered deal, Israel agreed to put off temporarily the annexation of occupied land sought by the Palestinians for their future state.

The Iranian Guard called the deal a "shameful" agreement and an "evil action" that was underwritten by the United States, according to the group's statement on a website it runs, Sepah News.

The Guard warned that the deal with Israel will set back American influence in the Middle East and bring a "dangerous future" for the UAE government.

Iranian President Hassan Rouhani also has condemned the UAE move. In a televised speech Saturday, he warned that the United Arab Emirates has made a "huge mistake" in reaching a deal toward normalizing ties with Israel. 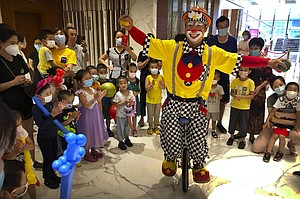 Photo by AP
Children watch Saturday as a clown magician performs at a shopping mall in Beijing. (AP/Mark Schiefelbein)

Iranian Foreign Minister Mohammad Javad Zarif, during a trip Friday to Lebanon, called the agreement a painful betrayal of Arab and other countries in the region.

Some 100 people gathered in front of the UAE Embassy in the capital, Tehran, on Saturday evening to protest the deal. They chanted "death to Israel" and "death to America" and burned an Israeli flag.

THE HAGUE, Netherlands -- Police in The Hague arrested 27 people as rioting broke out in a low-income neighborhood for the third night, with young people torching a storage building and throwing stones and fireworks at police Friday night and into the early hours of Saturday.

Unrest also spread to a second city, with arrests in a neighborhood of the central city of Utrecht, media outlets reported. Both areas affected are home to many families of Moroccan and Turkish descent.

Hague police said arrests were made for offenses including public violence, incitement and threatening behavior. They followed more than 20 arrests for similar offenses on Thursday night.

Riot police guarded firefighters as they put out a blaze in a storage shed for sports equipment and games in The Hague.

The unrest began last week during a stifling heat wave heatwave in the Netherlands and as water authorities in The Hague tried to prevent children from opening fire hydrants to cool off.

Populist, anti-immigration lawmakers are seizing on the unrest as evidence of failed policies to promote integration and call for those who refuse to integrate to be deported.

Tariq Arian, a spokesman for the Interior Ministry, said Fawzia Koofi, who is also a former parliamentarian, was attacked Friday afternoon near the capital, Kabul, while returning from a visit to the northern province of Parwan.

Koofi is part of a 21-member team that will represent the Afghan government in upcoming peace talks with the Taliban, after a U.S. deal with the militants that was struck in February.

The head of the Afghan peace delegation, Mohammad Masoom Stanekzai, tweeted that Koofi had survived the attack and was "in good health."

Fawzia Koofi and her sister, Maryam Koofi, stopped at a market in the Qarabagh district when gunmen attacked them, Arian said.

Both Taliban and an Islamic State group affiliate continue to carry out attacks against Afghan government figures, but Zabihullah Maujhid, a Taliban spokesman, denied the group was involved.

NEW DELHI -- The prime ministers of India and Nepal spoke over the phone on Saturday to try to ease bilateral tensions that have existed since a border dispute flared in May.

India's Narendra Modi received a call from his Nepalese counterpart, K.P. Sharma Oli, greeting India on its Independence Day and its recent election as a non-permanent member of the U.N. Security Council, a statement by India's External Affairs Ministry said.

The border dispute between the countries began over India's inauguration in May of a Himalayan link road built in a disputed region that lies at a strategic three-way junction with Tibet and China.

Nepal has been complaining that India is not responding to its offer made in November and December last year to hold official-level talks to resolve the issue.

The brief statements issued by the two sides on Saturday didn't say whether the countries plan to hold official-level talks any time soon.