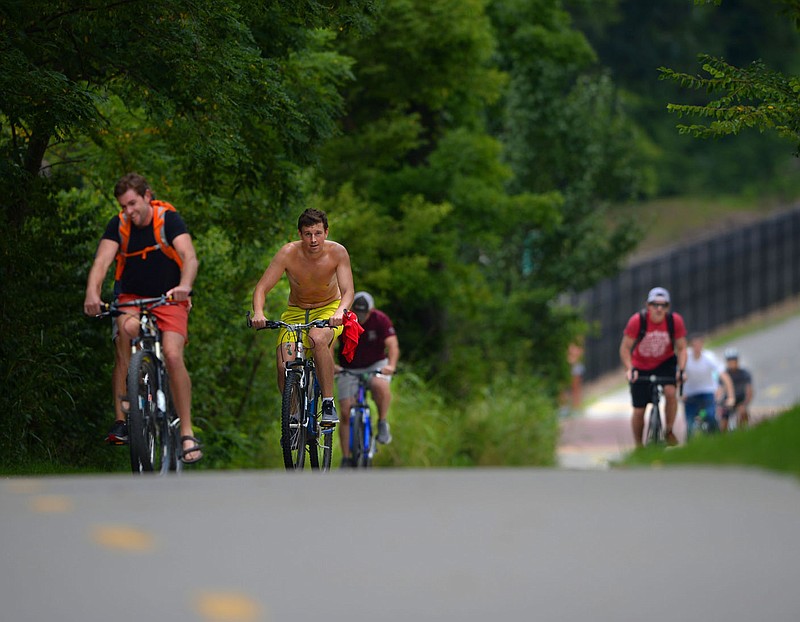 Riders make their way south Saturday, Aug. 8, 2020, on the Frisco Trail north of Maple Street in Fayetteville. The Walton Family Foundation released its 2019 trail usage report, the third one since 2019, which finds that the trail systems in Northwest Arkansas are experiencing a steady rise in bike and foot traffic. Visit nwaonline.com/200816Daily/ for today's photo gallery. (NWA Democrat-Gazette/Andy Shupe)

Northwest Arkansas boasts more than mere trails -- it has a network of alternative transportation and outdoor recreation pathways, according to a study from the Walton Family Foundation released this month.

The region had 484 miles of trails at the end of last year, according to the foundation's third study on trails released since 2015. Over the past five years, 181 miles of natural-surface trails and 35 miles of paved trails were added.

Cycling has increased by 36%, and pedestrian traffic has risen by 13% since the first study.

The Walton Family Foundation has given $74 million to help build 163 miles of natural-surface trails and paved paths in the region in the past 10 years, according to a 2018 economic report on trails.

The study put the cost of building a paved trail in the region at an average $217.09 per linear foot.

Trails such as the Razorback Greenway in densely populated areas and near regional attractions such as Crystal Bridges are the major traffic points, said Jeremy Pate, senior program officer for the Walton Family Foundation.

Nonprofit and municipal support make the growing network of trails possible, Pate said. Officials work to make sure that growth continues in a safe and effective manner, he said.

The number of users is likely to keep going up because more people are spending time outside during the pandemic, said Dane Eifling, Fayetteville mobility coordinator.

"People are starting to be able to experience their whole community through the trail system," he said.

A project is planned for two blocks east of the Bentonville square with 81 apartments and commercial space designed specifically to face the Razorback Greenway, according to a news release from Newell Development in Bentonville.

The location gives residents access to a 40-mile trail system connecting them to businesses and recreation. Developers said they designed the apartments with the goal of promoting cycling as a form of alternative transportation.

The Razorback Greenway needs trail-facing development to continue being successful and sustainable, said Erin Rushing. Rushing is executive director of Northwest Arkansas Trailblazers, a nonprofit group that has built several soft trails in the region. People are more interested in getting on the trails when they are connected to businesses to grab breakfast, or a park to stop at on their bike ride, he said.

The group, with the support of the Walton Family Foundation, is behind a plan to create a loop of soft-surface trails in Fayetteville that connects Centennial Park to the University of Arkansas campus and other places.

The Fayetteville Traverse trail is still in the concept stage.

Connecting Centennial Park to Kessler Mountain, Cato Springs Road and to campus would give people the chance to incorporate the trails more easily into their lives, Rushing said. It is no longer just a place to drive to, bike around. and pack up a vehicle and head home, he said.

Organizations such as the Off-Road Cyclists have advocated for those trails, and helped build and maintain them.

"You can definitely see an increase," Maxwell said about users.

Back in the day, Kessler Mountain was an unknown gem, he said. It's now one of the most popular cycling trails in the region, he said.

The study illustrates the importance of trails connecting neighborhoods, Roberts said. The hard surface multiuse trails are one of the safest and most accessible ways for people of all ages and abilities to get out and about, he said.

"Many people need the trail network to get to work because they don't have a car, and it's the only safe way they can get to their jobs," Paxton said. "That's why it's important we continue to build the trails out everywhere that we can and fill in the spaces with protected bikeways and neighborhood greenways." 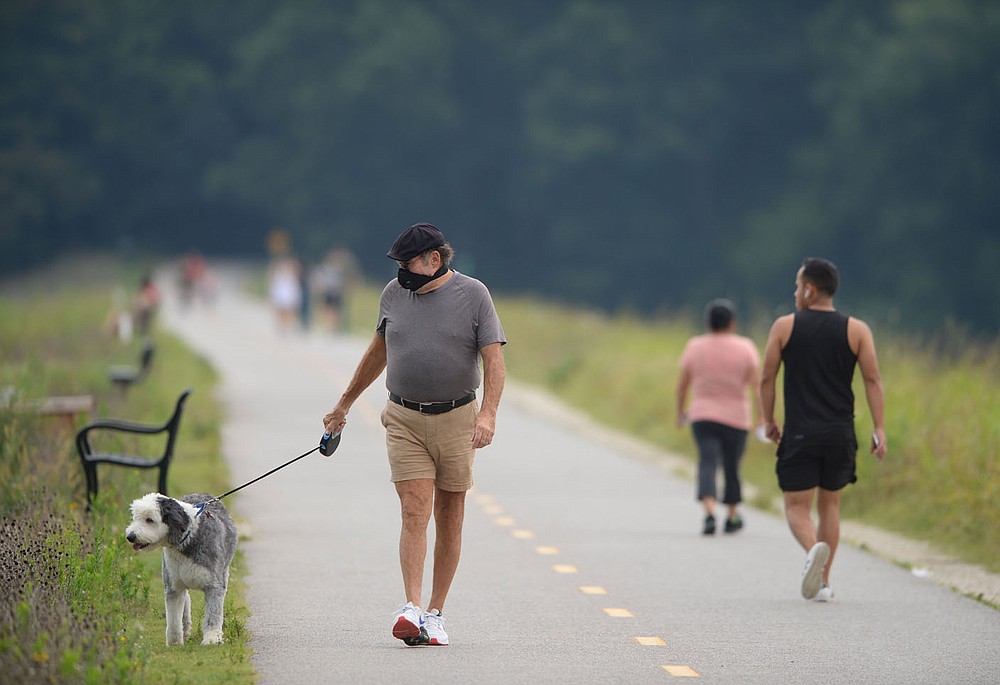 Storm Carr of Fayetteville walks Saturday, Aug. 8, 2020, with his dog, Winnie Mae, along the Lake Fayetteville dam in Fayetteville. The Walton Family Foundation released its 2019 trail usage report, the third one since 2019, which finds that the trail systems in Northwest Arkansas are experiencing a steady rise in bike and foot traffic. Visit nwaonline.com/200809Daily/ for today's photo gallery. (NWA Democrat-Gazette/Andy Shupe)
More News

Abbi Ross can be reached by email at aross@nwadg.com or on Twitter @AbbiRoss10.