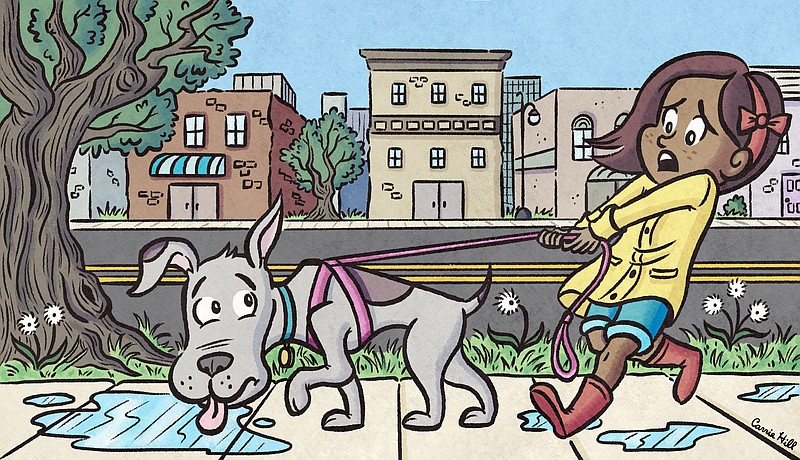 Q Is it OK to let my dog, Hunter, drink from puddles?

A No. Puddles can be contaminated with toxins, such as gasoline, oil and antifreeze, as well as parasites and bacteria.

Perhaps the worst thing Hunter might encounter in a puddle is Leptospira, motile, spiral-shaped bacteria that cause leptospirosis. This potentially fatal disease, nicknamed "lepto," also strikes humans and 150 other mammalian species.

Lepto occurs in all 50 states, and its prevalence, which is increasing, is highest from July through November, particularly after heavy rains or flooding.

Leptospira bacteria persist in animals that don't get sick, such as raccoons, skunks, rats and some livestock. These animals pass the bacteria in their urine.

The bacteria thrive in warm, slow-moving or stagnant water and can contaminate soil for months, especially if it remains moist.

Dogs are infected when the bacteria enter through the mouth, nose, eyes or skin. So, Hunter can be infected by drinking from or walking through a contaminated puddle or by eating an infected animal.

With antibiotics, most dogs survive, although some never regain normal kidney function. The prognosis depends on how quickly the disease is diagnosed and treated.

Many Leptospira subspecies, called serovars, cause disease in dogs. Fortunately, a vaccine that prevents four of the most prevalent serovars is available. If Hunter isn't already protected, talk with your veterinarian about vaccination.

Q I caught the end of a news report about pets and the plague. I thought the plague was eradicated ages ago, at least from the United States. Do I need to worry about my indoor-outdoor cats getting infected? Is this the next pandemic?

A The deadliest pandemic in history was caused by the plague in the mid-1300s. While I doubt that will be repeated, the disease is still present in the United States.

Plague, caused by bacteria called Yersinia pestis, occurs throughout most of the world. In the United States, the disease has been reported in every state west of the 100th meridian — in other words, from Kansas, west.

Yersinia pestis bacteria maintain a presence in the environment because they can live in many animals, including squirrels, chipmunks, groundhogs and other wild rodents, without causing them significant problems.

However, the bacteria spread to more than 200 other species of mammals, including pets and humans, where they can cause severe illness. Transmission occurs primarily by a flea bite or ingestion of an infected animal.

◼️ Septicemic plague, circulation of bacteria in the blood.

◼️ Pneumonic plague, bacterial invasion of the lungs that can spread by breathing, sneezing and coughing.

Plague begins with loss of energy and appetite, fever and swollen lymph nodes, which can abscess. The disease worsens quickly, with clinical signs varying depending on the type of plague the patient has. Without treatment, 40% of cats die.

To prevent your cats from getting the plague, use effective flea control throughout the year, and keep your cats inside to discourage hunting. Reduce rodent populations near your home by feeding all pets indoors and eliminating rock piles and other potential rodent habitats.