Razorbacks to cap football capacity at around 17,000 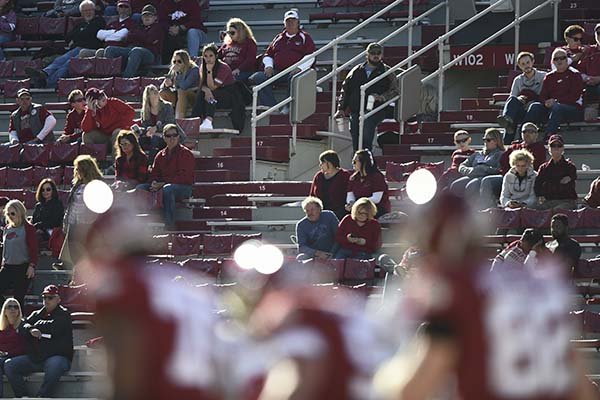 Fans watch during a football game between Arkansas and Western Kentucky on Saturday, Nov. 9, 2019, in Fayetteville.

FAYETTEVILLE — The University of Arkansas is preparing to allow between 16,000 and 17,000 fans at its home football games this fall, according to a letter sent to season-ticket holders Sunday.

In the letter, the UA says that it can fit between 21% and 23% capacity at the 76,412-seat Donald W. Reynolds Razorback Stadium and be in compliance with Arkansas Department of Health covid-19 requirements. The health department requires 6 feet of distance between groups of spectators.

The UA says anyone who attends games this year will be required to wear a face covering over their nose and mouth from the time they enter the stadium until the time they exit the stadium. Lines at gates, concession stands, merchandise stores and restrooms will be spaced to allow 6 feet between spectators.

Nearly 33,000 season tickets have been sold, according to the UA. The UA previously announced it will not sell single-game tickets this season.

That season-ticket total does not include tickets for students, who will be allotted up to 1,600 tickets per game, a UA spokesman said.

Dates for all of Arkansas' games will be announced Monday night.

According to the email, ticket holders will be surveyed Tuesday about which games they want to attend. Responses are due by Friday.

"The Razorback Ticket Center and Razorback Foundation will review requests and allocate requested seats as available based on 2020 Annual Fund membership level and Priority Points," according to the email. "Suite and loge box holders will have access to a 5-game season ticket plan inclusive of the number of permanent seats in their suite or loge box."

The UA will begin reassigning ticket locations next week and parking locations the week after, and will email ticket holders with details of their seating and parking arrangements by Sept. 9. According to the email, "fans should not expect to receive their normal season ticket location this year."

Those ticket holders who choose not to attend this year will be given the opportunity for a refund or to donate their ticket costs to the Razorback Foundation. Ticket holders were urged to support the program financially in the face of a significant budget crunch facing the Razorbacks and college programs across the country.

"Reducing the impact of those financial losses on the overall experience and success of our student-athletes is our top priority," the UA wrote to ticket holders.

The UA previously announced it would move exclusively to mobile ticketing at all sporting events in the upcoming year. Plans are also in place to implement contactless monetary transactions for concession stands and merchandise. A mobile ordering option will be unveiled for concession stands that will include pick-up stations.

Other notable changes for the 2020 season:

• No tailgating will be allowed on UA property.

• The pregame team "Hog Walk" will not take place.

• Players will not run through the on-field "A" prior to kickoff.

• Cheerleaders and mascots will be permitted inside the stadium, but not on the field.